Late April, looking toward May

I imagine you're tired of hearing about it, but — if you haven't been paying attention — we've been getting a lot of rain here France this month. Today the month of April ends, and we will have had the rainiest and chilliest April in the past 10 years. It came on the heels of the warmest, driest March in recent history. Talk about des hauts et des bas... ups and downs.
Yesterday, it again rained for most of the day, and it came down hard in the afternoon. There was a lot of wind, pushing big purple-gray clouds across the sky from the southeast toward the northwestat a fast clip. The ground was squishy wet underfoot, since it had rained most of the night. 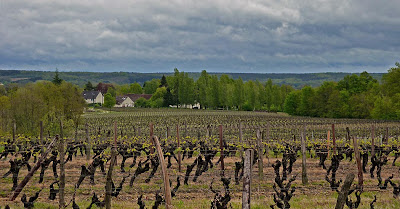 Looking across the vineyard toward La Renaudière,
outside Saint-Aignan-sur-Cher
We didn't have damaging winds here in Touraine, but the Alps region and the Massif Central to our south and east did, with a lot of trees down across roads and power lines. The news is reporting right now that many households are still without electricity and some have had their roof blown off. There's been flooding in areas along the Atlantic Coast, where rivers have overflowed their banks, and there was a tornado down near Toulouse. 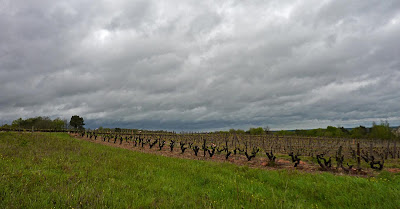 Lots of cloud on a Sunday morning
That said, it didn't rain during my morning walk in the vineyard with Callie, and the rain also let up late in the afternoon, when we went into Saint-Aignan and had a glass of wine with friends at the café called Le Lapin Blanc (The White Rabbit). We took Callie on a stroll around the town in advance of the appointed meeting time, and she enjoyed an urban kind of walk for a change. Dogs are welcome in French cafés and restaurants. 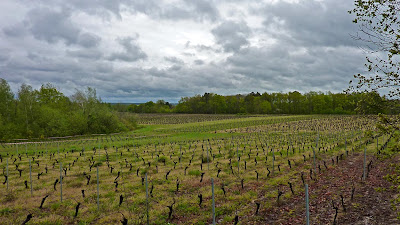 The greening of the vineyard is very late this year.
Tomorrow is a holiday in France. Le premier mai (May Day) is when labor unions organize marches and parades, when the right-wing Front National celebrates Joan of Arc and her victories against invading foreigners (those perfidious English) 600 years ago, and, this year, when the candidates in the presidential election will be holding rallies. A lot of people will also take today off work, it being a single workday stuck in between a Sunday and a holiday. That's called a pont, or "bridge," in France — les gens font le pont (they "make the bridge") so that they can enjoy a four-day weekend.

The dirt road through the Renaudière vineyard
In addition, Tuesday May 8 is also a holiday — it's Victory in Europe (VE) Day, marking the end of World War II. That'll be another pont for a lot of people. May is full of holidays in France, including not just the 1st and the 8th, but also the 17th (Ascension Day, a Catholic holiday that always falls on a Thursday) and the 28th (La Pentecôte, another Catholic holiday, which includes a Monday off work and out of school for many in France).

The presidential election is next Sunday, the 6th. The latest poll shows Hollande leading Sarkozy by 53 to 47%. Everybody here is hoping for good news in May on the political front (however each person defines that) and on the weather scene (unanimously wishing for sunshine). And, especially, for some nice long weekends.
Posted by Ken Broadhurst at 07:33