My old friend (no pun intended) CHM might not recognize his bread recipe in this guise, but I have to say it makes a very good bread. I took the recipe that was written for use with a bread machine and made it "by hand" — using a KitchenAid stand mixer to do the kneading. 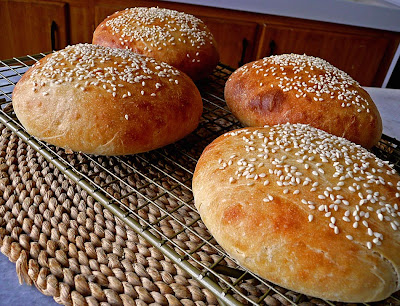 Walt shaped the dough into buns and let them rise while I was out running some errands and meeting some visiting Americans in Saint-Aignan. He stuck sesame seeds on the buns and baked them. We made sandwiches. Très américain, non ? These are the kinds of things we bake on days when we don't have a bread delivery. 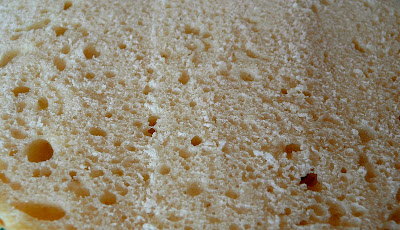 Here's the recipe we were working with. It's succinct. CHM posted it in a comment on Susan and Simon's blog (Days on the Claise) a few days ago. He calls it his Japanese bread because he uses a Japanese-made bread machine to mix, knead, and cook it. 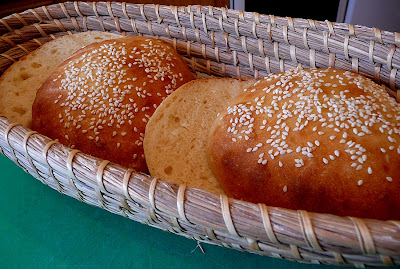 CHM told me that the machine does an initial kneading and rising, then a second kneading and a second rising, over a period of a couple of hours. That's what we did — the ball of dough rose once in a big bowl, got punched down and divided into four smaller balls, and then rose again before it was baked.

When I mixed up the dough, I put in the salt, the milk, and half the flour, which I mixed up first. Then I added the rest of the flour and the yeast and let the mixer knead the dough for about 10 minutes. Then it was ready for that first rise. 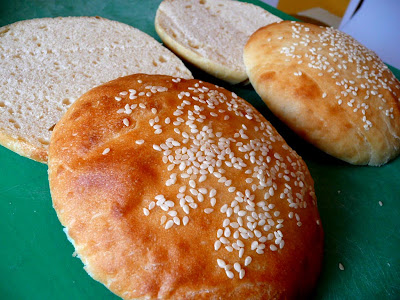 What do you think of our buns?

The nice thing about this bread is that it's soft enough to make a good sandwich bun but it's not cake-like or spongy. It has good texture. I of course used the French equivalent of all-purpose flour, which is the least expensive flour sold at SuperU (farine ménagère, or "household flour"). And I used French instant yeast (Francine brand). CHM says he uses King Arthur flour in the U.S. and SAF or Red Star yeast. 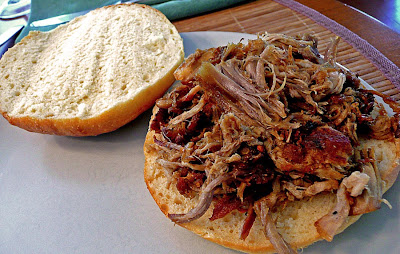 For sandwiches, the first time we made them on these buns was on Monday. I had some "pulled pork" that I had made earlier. That's pork shoulder cooked very slowly and for a long time in the oven with a sauce composed of vinegar and hot red pepper, along with a little Worcestershire Sauce (which in France is sometimes called sauce anglaise) and some smoked paprika, salt, and pepper. 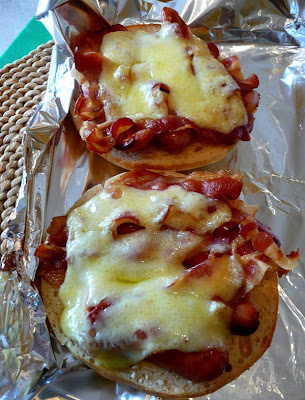 French-style hot dogs but on a round bun


Yesterday we had sandwiches again, this time with saucisses de Strasbourg (frankfurters), bacon, melted Gruyère cheese, and mustard. That's the recipe for what in France is called un hot-dog, but we used our round bun instead of the usual elongated bun. These were ingredients we happened to have in the refrigerator.

TMI, I guess. But the bread is good. When I used to visit CHM out in the Southern California desert, he would make his bread-machine loaf overnight and we'd have thick slices of it toasted, with butter and jam, for breakfast. It was always delicious, and now I know that the recipe also makes nice hamburger or hot dog buns. They're much better than the buns we can buy in the supermarket here in Saint-Aignan.
Posted by Ken Broadhurst at 07:50