Yesterday I made the beef roll-ups that are called « alouettes sans tête » in French — "headless larks." Another name for them is simply "headless birds" — « oiseaux sans tête » — which some sources say is a Belgian term. And finally, they are called « paupiettes » or "roulades." You might find all these terms used interchangeably. And there are no actual larks on the ingredient list.

The recipe I made came from an idea that a Frenchwoman named Françoise left in a comment on my earlier post about turkey breast paupiettes. Françoise said that, in Provence, people cook thin slices of beef rolled up around a stuffing of pork, onions, garlic, and herbs. They cook them in tomato sauce with green olives. "The name of this dish is alouettes sans tête. Try it, it is delicious !" she wrote. 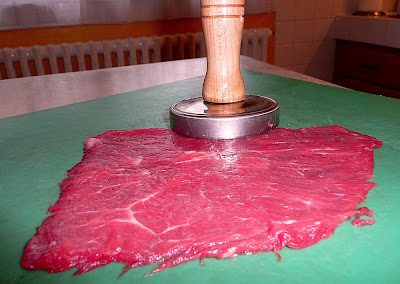 So I did. I used the same pork, mushroom, and onion stuffing I had made for the turkey breast roll-ups and saved in the freezer, adding to it some chopped sun-dried tomatoes and green olives for extra flavor. Then I made the paupiettes by just spreading the stuffing on beefsteaks flattened with a meat pounder/tenderizer before rolling them up and tying them into little packets. I didn't think I needed to wrap them in strips of bacon this time.

The next step is to brown the paupiettes in butter or oil, turning them so they brown on all sides. That takes about 10 minutes.

When they are browned, add about a cup of good tomato sauce to the pan and let the paupiettes simmer in it for an hour or so, adding wine or water as needed to keep the sauce from drying out. You can let them simmer, covered, on top of the stove, or in the oven.

We ate these alouettes sans tête with pasta, but they'd be good with polenta or even rice, I think. One per person is probably enough. Good bread, good red wine, and a nice green salad complete the meal.
Posted by Ken Broadhurst at 07:45