That's enough about politics for a while. Back to the (lousy) weather. A news story on Télématin a minute ago said that the French are feeling depressed and tired because of the cold rain that has been falling intermittently for weeks now. In fact, at this point it's raining pretty much steadily. Lack of sunshine means lack of vitamin D, and a general imbalance for the human organism.

I think I wrote earlier than in this part of France you have to make sure you take advantage of every spell of nice weather you get, because it won't last. A while back, we helped our neighbor unload a big piece of furniture out of a truck and put it in his house. He's lived here is whole life. "We really need some rain," he said at that point. "But then when the rain starts it probably won't stop again for a couple of months." Bingo.

When I hear people from Great Britain say they come to France for the nice weather, I wonder what it must be like up there. No wonder so many Brits emigrated to North America, Australia, New Zealand, and other sunnier climes over the past four centuries.

Everything is getting green, though, and there are wildflowers all around. The grapevines are an exception. It must too chilly for them, because their leaves seem to have stopped growing. I'm sure the vines need the moisture, however, and the first sunny days, when they come, will see all the rest of the leaves just pop out. 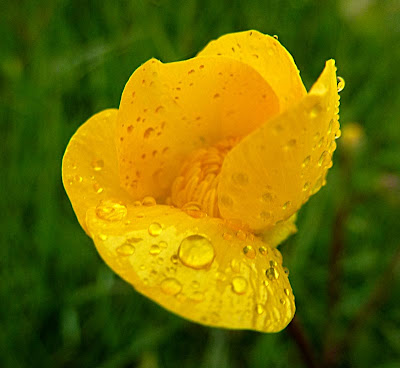 And it is going to get warmer, according to the forecast. This latest rain episode was brought in by winds from the south. I know, because my pollen allergies kicked in big-time yesterday. Teary eyes, nasal congestion, violent sneezing. It happens every spring, but less here than what I used to suffer in California. I'm allergic to cypress tree pollen, and the cypress grow mostly south of the Loire Valley. So when we get a southerly flow, I'm miserable.

Yesterday was a gloomy day and today looks to be the same. I hope April showers will bring May flowers even prettier and more plentiful than the ones in the photos here.
Posted by Ken Broadhurst at 07:26