The Easter market at Saint-Aignan

The market in Saint-Aignan was hopping yesterday. Walt and I got there early, before the biggest crowds showed up, but still we waited a while in line to buy a rabbit from our favorite poultry vendor. I know, rabbit is not poultry... but the meat resembles poultry — tastes like chicken, isn't that what we say? — more than pork, beef, or lamb.

When we left the market at about 11:15, after having a glass of local white wine in a café with a young American woman who is spending the month of April in Saint-Aignan, we just about had to push our way through throngs of people. The weather was sunny but chilly, and there was a festive, bustling feel to the whole town. 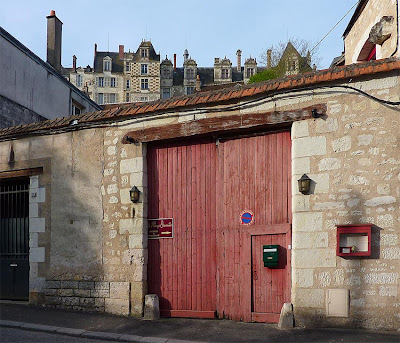 The château up above the streets of Saint-Aignan
So as I was saying, rabbit is sold by the poultry vendors at the market and is stocked in the poultry section at the supermarket. I had no doubt that we'd find a rabbit at the market; it's a standard item. I was interested to see that the rabbits at the poultry stand at the open-air market were less expensive (at 8€/kg) than the ones I'd seen in the supermarket (11€/kg) on Friday. And I think the quality is better. The one we got weighs about 1.3 kg, or nearly three pounds. This morning's job is to cook it. 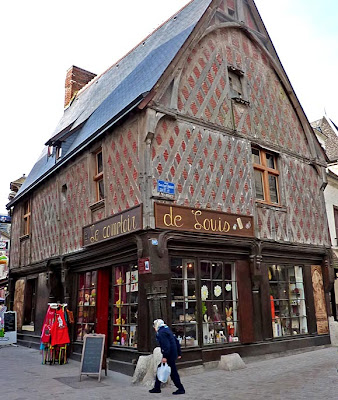 A gourmet grocery shop has recently opened up in this
old Saint-Aignan house — 15th century, I think.
We saw a lot of asparagus on different market stands too, but much of it was for sale at 10 or 11 euros per kilo. We'll wait for prices to come down, as they'll do over the next couple of weeks. Last year the lowest prices we saw were about 5€/kg. I'm not sure that much of the asparagus on sale yesterday was really local — it probably came from farther south, if not Spain. 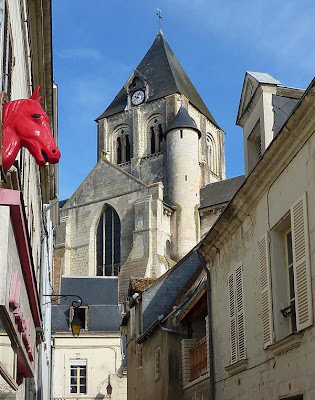 The church in Saint-Aignan seen from the market square —
the red horse's head signals a shop that sells horse meat.
The other thing we wanted to find at the market was escargots, but we didn't find any. The man who specializes in snails seems to have disappeared. A few weeks ago, during school vacations, I wasn't surprised when we didn't see him at the market. But I figured he'd been there on "Easter Saturday" for sure. He wasn't. So no snails for us this weekend.