Our bread delivery service suddenly stopped on Thursday, with no warning. La porteuse de pain ("the bread-bringer") stopped by Tuesday morning as usual, and she didn't say anything about vacations or boulangerie closures. Usually she gives us advance notice when she won't be making her rounds, and even leaves us a little printed note specifying stop and re-start dates.

On Friday morning Walt drove down to the village — it's two miles — to see if he could buy a baguette and find out what was going on. The boulangerie was closed, with the big window shades pulled down. Fermeture à partir du mardi 24 jusqu'au dimanche 6 mai, a note on the door said. Mystère, for us.

I hope the baker will come back. The unannounced closure is so unusual that it makes me wonder what is really going on. This baker, who took over the business a couple of years ago when the old baker and his family moved to Saumur, makes some of the best bread around. His bread is so good that I wouldn't be surprised if he ended up in a bigger town where he'd have more customers. 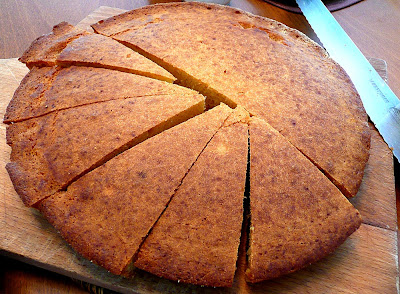 American-style cornbread made with yogurt
instead of buttermilk
Walt drove into Saint-Aignan to get bread from another baker there, whose baguettes are also very good. On Thursday, we had thrown together a pan of cornbread at the last minute, when 11:00 came without the familiar horn toot announcing the arrival of our daily baguette. Cornbread is easy and fast, as long as you have the ingredients: cornmeal, flour, sour milk (or yogurt), an egg, and some baking powder. 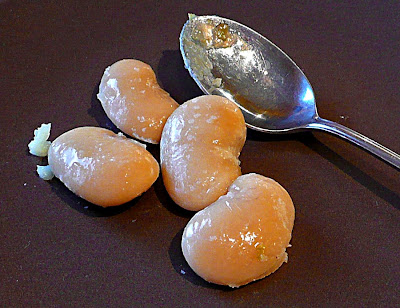 Cooked Soissons beans with a teaspoon for scale
And cornbread is good — no doubt about that. It was perfect with the lunch we were having: Soissons beans and sausages. Haricots de Soissons are giant white beans that I've written about before, here. Soissons is a town in the north of France, in Picardy and near Laon and Reims (Champagne), and I did a post about it here. 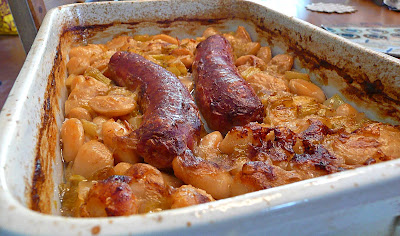 Soissons beans cooked with Toulouse sausages
Soissons beans are a little like big white Lima beans, which are also called butter beans in some places. They certainly aren't native to Soissons, but they've been a major crop and gourmet specialty there since the mid-1700s. Like black, kidney, white, and pinto beans, they were originally a South American plant. Beans were brought to Europe during the period of exploration, a few centuries ago. 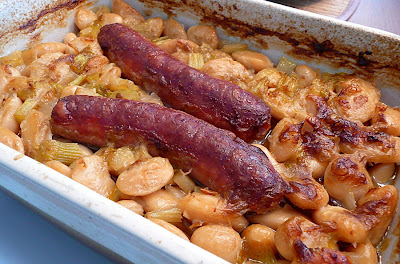 Another shot just because...
The difference between Soissons beans and big Lima beans is that the 'soissons' [swah-'sõ] are fatter and keep their shape better when you cook them. The skins don't slide off as easily. Still, you have to cook them at very low temperature for a long time, after soaking them in cold water for 12 hours. Then other day, I cooked them at a bare simmer for three hours, at least. And then I put them in a baking dish with poached sausages — Toulouse sausages, in this case — and let them good for another hour at 325ºF, until the sausages had browned. 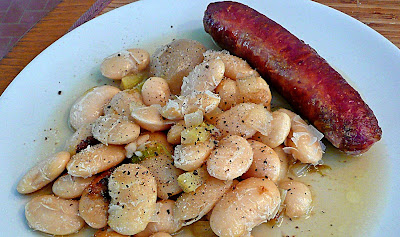 The beans are flavored with diced onions and celery.
In the late 1700s and early 1800s, the acceptance of the potato in France as food fit for people and not just farm animals nearly killed off the Soissons bean. It had been the major source of dietary starch until Parmentier popularized the spud. The cultivation of the big beans declined over the decades, until a group of bean farmers around the town of Soissons started growing and selling them again. To promote Soissons beans and encourage production, 15 or 20 years ago they formed an association called La Confrérie Gastronomique des Compagnons du Haricot de Soissons. 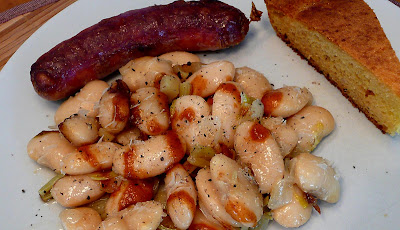 Walt put some chipotle tabasco sauce on his beans.
Actually, the beans I cooked the other day came from a supermarket up in Picardy, but they were imported from Spain — but I don't know where they were grown. I've never found them here in the Loire Valley. Often when I buy bags of dried beans here, they are imported from Portugal but the label will specify where they were grown (often in the U.S. for black-eyed peas or pinto beans).

Whatever the case, it seems that the climate and soil in northern France are perfect for Soissons beans. The mild weather encourages the beans to grow big and fat and to remain tender. The skins don't toughen up the way they would under a hotter sun. They really are excellent.
Posted by Ken Broadhurst at 08:00