Saint-Aignan-sur-Cher is a little town — population 3,500 — built around a huge church and an enormous château. It's on the Cher River, in the southern section of the Loire River Valley — the Cher is a tributary of the Loire. Like many medieval towns, Saint-Aignan was built on hilly terrain dominated by a high promontory that could be easily defended from attack. 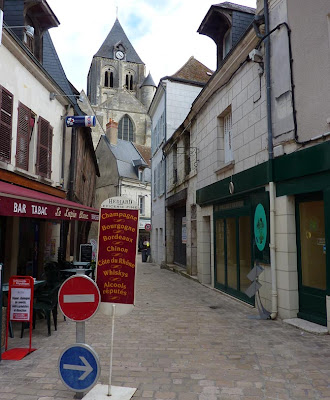 A Saint-Aignan landmark is the café called
Le Lapin Blanc — The White Rabbit.
Saint-Aignan is more prominent now than it has ever been before on the national level in France. A good part of its modest renown is owed to the existence of the Zooparc de Beauval, an internationally known zoo on the south side of town. Recently, the zoo acquired two giant pandas from China. It's by far the town's biggest tourist attraction, especially since the château is not open to the public. 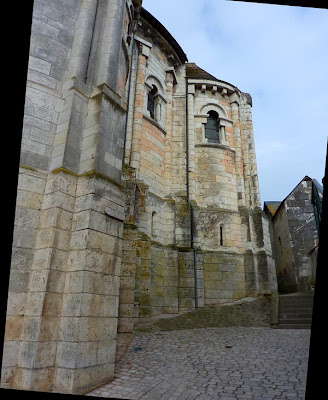 The church up close — nice pink stone
Saint-Aignan-sur-Cher used to be known as Saint-Aignan-en-Berry. Le Berry is an old French province that no longer has an administrative or official existence. Saint-Aignan is located at the historically rural Berry province's northwest limit, where it borders on another historic province called La Touraine. La Touraine, centered on the ancient city of Tours, is known for its wines and its royal Renaissance châteaus. The wines made in the Saint-Aignan area are AOC Touraine, soon to be AOC Touraine-Chenonceau. 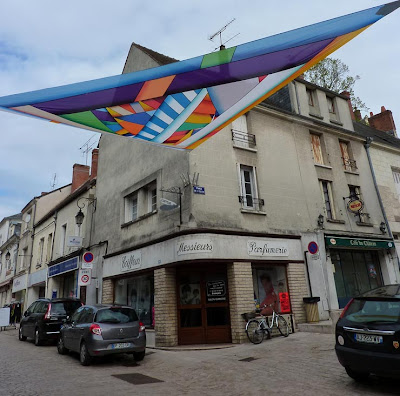 A new street decoration near the church
When I moved to Saint-Aignan in 2003 — my partner and I actually live in a neighboring village, but our house is just two miles from the center of Saint-Aignan — I didn't know the town at all. We had spent a couple of vacations in nearby Vouvray, Amboise, and Montrichard, about ten years ago. It was a real estate agent who told us we should consider finding a house to buy in the Saint-Aignan area if we wanted to relocate to this region. You'll get more for you money, he told us. We are happy that he gave us that advice. 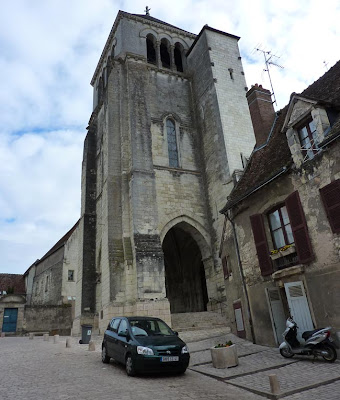 Saint-Aignan's hulk of a church
Yesterday I met up with some Americans who lived in Champaign-Urbana, Illinois, when I did, back in the 1970s. We didn't really know each other then, but we've learned now that we had more than a few mutual friends. Linda and Jack are spending a week in Saint-Aignan with their daughter, Laura, who is spending a year in France. It's always fun and interesting to meet people through this blog. Many people we've met this way have become new friends. 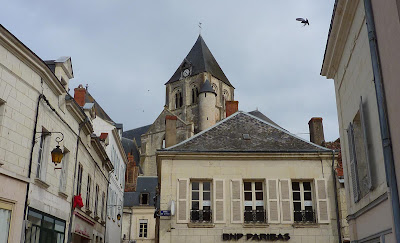 View from the market square
So I went into Saint-Aignan yesterday morning to run an errand and to meet these visitors in a café (Aux Cépages a.k.a. Chez Lily, a wine bar — but we just had coffee!). I took advantage of the outing to take some pictures of Saint-Aignan's church from different perspectives, and a few other scenes. It was a cold gray morning, with a biting north wind. Everybody was talking about the unusually chilly weather. Some were saying it's better to have a cold snap now than in May...
Posted by Ken Broadhurst at 09:00