Easter in French is « Pâques ». Happy Easter, then — or Bon Pâques. What an unusual word in French. It looks like it would be feminine and plural, and it can be in some contexts. But in everyday language in France, Pâques is a masculine singular word — even though « Joyeuses Pâques », feminine and plural, is a set expression.

Pâques is masculine and singular because it's a shortcut for saying « le jour de Pâques » — Easter Day, or Easter Sunday — and the word « jour » is masculine and singular. Evidently, the fact that Noël, Christmas, is masculine influenced the usage for Pâques. Rules, exceptions, expressions, and strange agreements like this one is one of those things that will always trip you up if you aren't a native French speaker, and give you away.

Here's the entry from the French Robert Electronique dictionary.Click the image to enlarge it.

We have a lot of little expressions in English that trip up French-speakers too, and give them away no matter how good their English is. One that comes to mind is the distinction between "this" and "that" or "here" and "there" — its instinctual for us but not for non-native speakers. It confuses the dickens out of French-speakers.

Oh well. When you aren't a native speaker, you have to grit your teeth and be resigned to making a lot of mistakes and to confusing people by saying something that's almost correct but not quite. You get used to seeing the puzzlement on people's faces when you talk to them.

Tomorrow is market day in Saint-Aignan. We'll be going into town to look for three specific items. One is fresh asparagus. The season is starting and will run into June. White asparagus is a local crop and specialty. Out of season, you don't find asparagus on the markets or even in the supermarket, except in cans and jars. 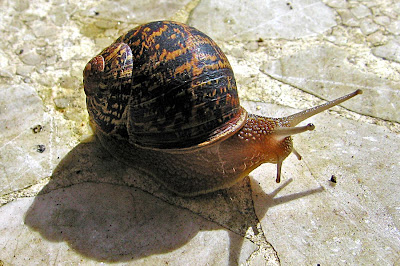 The second thing will be some escargots. There's often a man at the market who sells nothing but snails. He sells them raw and he sells them cooked. I don't know if he sells them live, but he might. Walt and I have been wanting to eat snails for a while, but the man hasn't been at the market the last few times we've gone. Maybe tomorrow, Easter weekend, he'll be there.

The other thing we want to bring home is a rabbit — not a live one, but one that's been skinnedk, cleaned, and dressed for cooking. We've been eating rabbit every year for our Easter dinner for decades now, and we don't want to break the tradition. I plan to cook lapin à la moutarde on Sunday morning. That's rabbit braised in white wine with onions, carrots, and herbs, and then served with a sauce composed of the braising liquid, some fresh cream, and a little bit of Dijon-style mustard.

Wish us luck on finding the three things we're hoping to find. And Bon Pâques.
Posted by Ken Broadhurst at 07:50