Leeks in French are called « poireaux », and unless things have changed they are much more widely available here in France than in the U.S. In fact, everybody here in the Loire Valley seems to grow them, the way so many people in the U.S. South grow greens like collards — at least where I come from.

The leek is a kind of onion. Or garlic. It has a mild, oniony taste. The Larousse Gastronomique says that it's a very ancient crop, and that no wild form of leek has ever been identified. The plant seems to be a cultivated form of an oriental garlic, the LG says. It looks like an overgrown spring onion or scallion. 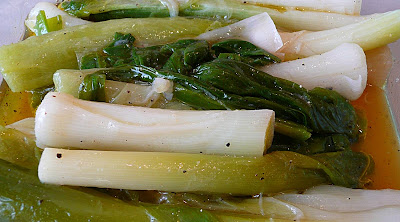 Salade de poireaux à la vinaigrette
In France, one way that leeks are often served is as one of the ingredients in a pureed soup called « potage parmentier » — leek and potato soup. The other very common way is to cook the leeks and dress them as a salad with vinaigrette. Poireaux à la vinaigrette is one of the standard simple salads, like carottes râpées or salade de betteraves, that you see in every French delicatessen, or charcuterie. The key word here is "simple." 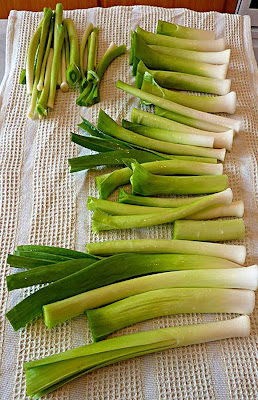 Leeks salvaged from our winter garden
A few weeks ago, we thought that the extremely cold weather we had in February had killed the leeks that we were growing in our vegetable garden. Leeks are a crop that can stay in the ground all year in our normally mild climate here in the Loire Valley. But after two weeks in the deep freeze, ours looked pretty sad. 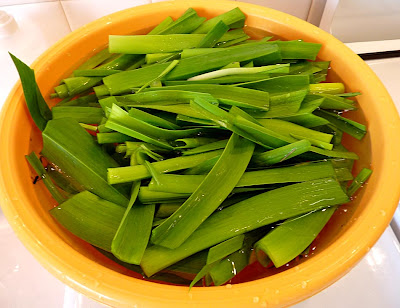 Wash and freeze the raw green leek tops to add to soups
and stews as part of an herb bouquet garni.

When I went out and started pulling them up so that I could till the garden plots, I was surprised to see that the leeks had survived. The inner layers were tender and obviously alive, under the rough outer leaves that had been burned by the cold. Instead of throwing the leeks into the compost, I was able to harvest them and use them. 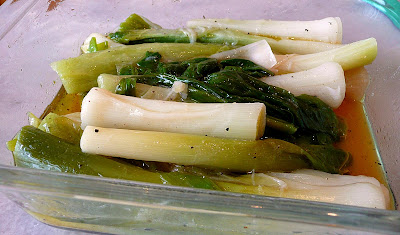 Since the leeks are cooked, the salad will keep
for several days in the refrigerator.
To make a salad of leeks with vinaigrette, you need... leeks and vinaigrette. It's really the white parts of the leeks that are good in salad — the dark green tops are too tough and fibrous. You trim up the leeks and then cook the white parts in simmering water until they are tender. Be careful to check that the leeks don't have sand in them. Split them open and wash them under running water if they do. 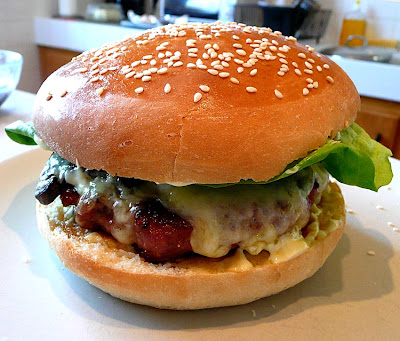 Here's the mushroom turkey cheeseburger we made
a few days ago, using the buns Walt baked.
When the leeks are cooked, let them dry on a rack or on a towel. Put them in a serving dish and pour vinaigrette over them. Vinaigrette is a mixture of Dijon mustard and vinegar — a teaspoon of mustard in two tablespoons of vinegar, say — seasoned with salt and pepper and then mixed with four to six tablespoons of good salad oil — olive, sunflower, or canola, for example.

Don't forget the salt. Actually, the word "salad" — French salade — derives from the word "salt."
Posted by Ken Broadhurst at 08:00