Yesterday I posted a couple of photos of flowers you might think of as exotic and unusual — orchids. Today, here's a plant that is anything but. It's the dandelion. 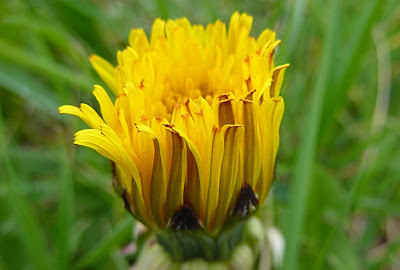 A dandelion flower out in the vineyard
The word dandelion comes from the old French name dents-de-lion, which means "lion's teeth." The name has to do with the shape of the leaves, which are jagged and pointy. Names like dandelion appear in other languages too.

Dandelion seeds and their "parachutes"
In French today, however, the plant has another name — it's called le pissenlit. That means more or less "pee in the bed." It refers to the pronounced diuretic effect the dried, pulverized taproot of the plant has on the human organism when ingested. 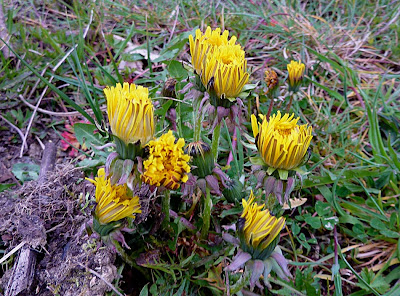 More flowers than leaves here
You can also eat the leaves of the pissenlit, but they are bitter. Cooking them a little before eating them in a salad dressed with a vinegary sauce that includes a little bit of bacon or ham can make the leaves more palatable. Walt and I actually picked some dandelion leaves in the yard a couple of weeks ago and tried them, but they were too bitter even for us. They say you should pick the leaves of young dandelions before the plants have flowered.

This one just needs a puff of air to start sending seeds far and wide.
One last thing about dandelions: they appear in an expression in French where we favor a different flower, daisies, in English. We all know what it means when we say that somebody is "pushing up daisies" — it means the person is dead and buried. In French, the equivalent expression says that the dead person « mange les pissenlits par la racine », or "is eating dandelions by their roots."

We are off to Sazilly, near Chinon, today, after a 24-hour delay. It did rain some yesterday, but not as hard or long as the weather reports said it might. Today is just supposed to be showery.
Posted by Ken Broadhurst at 08:00