A few years ago I went to North Carolina to visit family and friends. When I came home, I brought back to France a tiny cutting — not more than three or four little round leaves on a stem — of a plant known commonly as a Donkey's Tail. It's a sedum — Sedum morganianum is the Latin name. It's from Mexico and is sometimes called Burro's Tail or Lamb's Tail. 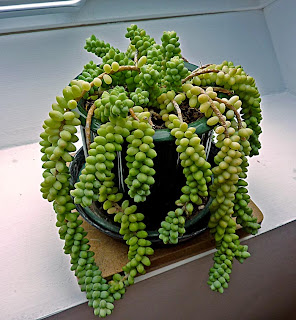 I don't think I had ever seen such a plant before, even though I had a lot of succulents planted in pots and in the ground when we lived in San Francisco. Out there, where the temperature very rarely goes down to freezing, you could grow plants like these outdoors year-round. But I'd never seen one like this before. 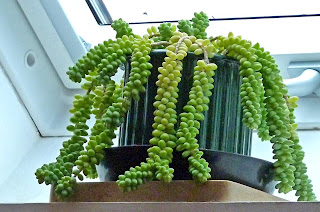 On a subsequent trip to N.C., I went to visit an old friend — a distant cousin I grew up with — who had bought an old house in the neighborhood where we lived and was in the process of renovating it. I was surprised to see that he had a gigantic Donkey's tail plant in a hanging pot on his south-facing back porch. The long leaf-covered stems hung down a foot or more in a huge mass of fat green leaves. 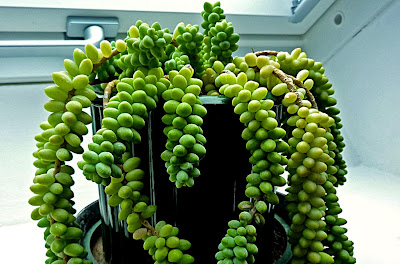 It turns out that Sedum morganianum is very easy to grow, despite its fragile appearance. One web site says: "Donkey's tails are pretty forgiving plants — if you forget to water them once or twice, they'll probably be just fine. If you want your plant to really thrive, make sure to provide strong light, fertilizer during the growing season, and adequate moisture during the growing season. Too often, these are left to fend for themselves, simply because they can. But with a little effort, the plant can be a remarkable specimen." I bring it inside in the wintertime. 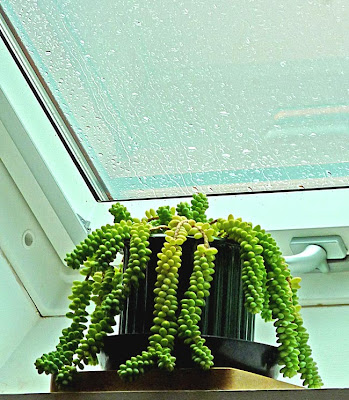 The Donkey's Tail is easy to propagate too. I have a second one in another pot that came from a cutting. It's been neglected. Last summer I put it outside and hardly watered it at all. I thought keeping such plants dry was the key to keeping them alive. The neglected sedum has grown to be about as big as the parent plant in these pictures. This summer, I plan to fertilize and water the plants more generously to see how big I can get them to grow.

Caution: I just read on another web page that the sap from this sedum's leaves can cause infections and even blindness if you get it in your eyes. I don't know if it's true but better safe than sorry.
Posted by Ken Broadhurst at 07:40