Hollande's in the lead, but...

Not to focus on the negative, but IMO the bad news (and biggest surprise) yesterday was the high score of the right-wing Front National candidate in the first round of the French presidential election. Marine Le Pen, successor to her father as head of the FN, pulled in 18% of the vote. That's a higher score than her father ever won. There's a history of people refusing to tell poll-takers that they intend to vote for the far right. They then do it anyway.

The good news, I guess, is the turnout. Slightly more than 80% of the registered voters in France actually voted. They voted in spite of the fact that election day fell right in the middle of spring school vacations, when many people are away from home. Predictions had been that turnout would be much lower.

For the incumbent, Nicolas Sarkozy, the picture looks better than it did a couple of days ago — in a way. If you add up his votes — 27% — and Le Pen's 18%, you get close to the 50% he would need to win a second term in office. His problem, however, is that he can't move too far to the right in an effort to attract the FN vote without risking alienation of the moderate base that is an important part of his party. Besides, Le Pen has never had much good to say about Sarkozy.

In fact, this is the first time that an incumbent president has not won the largest share of the vote in a first-round election. The Socialist Party candidate, François Hollande, got 28% to Sarkozy's 27%, and he is still out-polling the incumbent for the second round of voting, with a 54-to-46 percent advantage. Of course, the voting is still two weeks away...

The centrist candidate, François Bayrou, got just under 10% of the first-round vote this year, after getting twice that in 2007. Who his voters turn to will be an important factor on May 6. 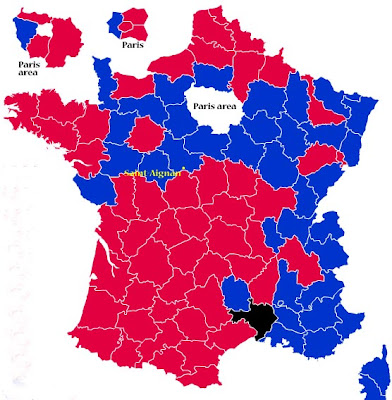 Here's a map showing the French départements and who won the most votes
in each one — red = Hollande, blue = Sarkozy, and black = Le Pen.

Some commentators are saying that the results of the first round constitute a double slap in the face for Sarkozy. Not only did the Socialist candidate get more votes than he did, but the Front National candidate did much better than expected. Sarkozy's effort to get people to vote for him rather than for Le Pen wasn't very effective. In fact, he may have actually helped Le Pen do better.

For the Socialists, just getting through the first round is an important step. They did well in the last election, in 2007, but not quite well enough to win the presidency. Their candidate, Ségolène Royal, got into the second round and actually won 48% of the final vote to Sarkozy's 52%.

In the 2002 election, however, the Socialist Party candidate, Lionel Jospin, was edged out by the FN's Jean-Marie Le Pen, setting up an all-right-wing run-off with incumbent Jacques Chirac. Chirac won a second term as president with more than 80% of the vote. The only Socialist president of France since the 1960s has been François Mitterrand, who served for 14 years (1981-95).

What does the Front National want for France? I'm no expert, but one thing Marine Le Pen says is that France needs to leave the euro zone and go back to using the French franc. She also wants to clamp down on immigration and beef up law-and-order forces. Her party is would try to isolate France and protect it from globalization. Could France go it alone in today's world? Probably not.

Locally, Saint-Aignan and the village we live in gave Sarkozy the most votes, followed closely by Le Pen and Hollande. But on the other side of the river, many of the villages near us went for Le Pen. Blois and its suburbs gave the Socialist Hollande more than 30% of the vote.

But overall in our département, the famously rural Loir-et-Cher, Sarkozy got 28%, Holland got 25%, and Le Pen got 21%. Hollande did slightly better in neighboring, less-rural Indre-et-Loire, centered on the city of Tours, and Le Pen did worse there. Interestingly, Hollande out-polled Sarkozy in the even more rural Indre département just to our south.
Posted by Ken Broadhurst at 08:00