Dogs and cats famously do not become fast friends — even though many people might jump in with stories about how well their felines and canines tolerate each other or even seem to show affection for each other. In the case of border collies like Callie, I think the herding instinct is just too strong.

A few days ago, Callie and I went out for the afternoon walk and had an unplanned encounter with Bertie the black cat. He was out hunting, I think, in the little wooded area that borders our property on the north. Callie didn't greet the cat in a friendly way, but neither did the dog act ferocious or uncontrollably aggressive. 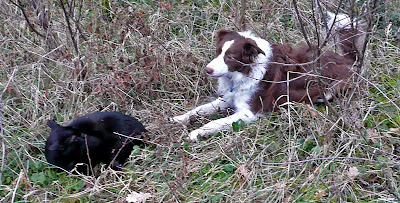 Bertie and Callie during an unscheduled meeting
Bertie didn't run, either. He hunkered down, ears bent back the way a cat's ears do when he's getting ready to defend himself, and he waited. Callie tried to bite his back legs, the way sheep dogs do to herd sheep. She also tried to grab the cat by the scruff of his neck — not to pick him up and shake him, I think, but just to show dominance. She drooled on the poor cat too, as she's done before. 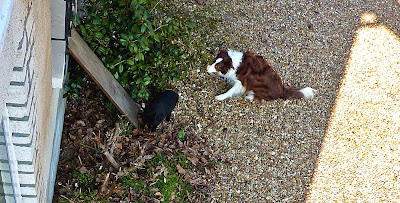 Another outdoor encounter a day or two ago
went about the same way.
If the cat could talk to the dog, everything would be just fine. But that's obviously not going to happen. Talking to Callie is what allowed a little boy, the 5- or 6-year-old son of friends visiting from California last summer, to get Callie to settle down. Until he spoke to her, using the words that dogs learn from people — sit! down! no! good dog! — Callie wouldn't leave the boy alone. She wanted to herd him, and that scared the daylights out of him. As soon as Callie realized he was a person who could talk like a person, the dog starting obeying and playing in a tame way. 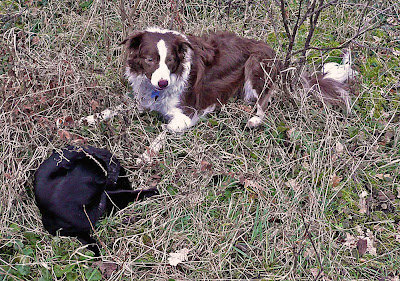 I tell myself that the cat's refusal to run and the dog's
lack of ferociousness are signs of progress.
Anybody got any clues about teaching a cat to talk? English or French will work, no problem. He just needs half a dozen of the right words.
Posted by Ken Broadhurst at 07:30