The big news in France remains the weather, because it has returned more or less to normal. There's still some snow in the east — in Alsace, for example, and the mountains near Switzerland — but that's normal over there. Our thaw has happened here in Saint-Aignan, and we had what felt almost like warm rain showers yesterday afternoon.

They are saying that the recent cold snap was the wintertime equivalent of the grande canicule — the great heat wave — of the summer of 2003. It was the polar opposite of that event — pardon the pun. In a comment, CHM mentioned the winter of 1956, which is famous in France as one of the coldest ever — many thousands of olive trees down south in Provence were killed by the freeze that year, for example. 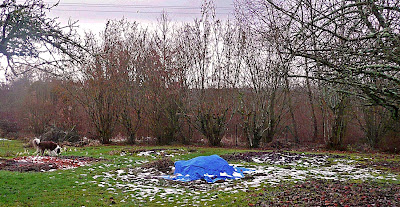 There's not much snow left out in the back yard.
It's time to think about the 2012 vegetable garden.
The winter of 1985 was the last time it was as cold in France as it has been this month, according to reports. I wasn't living here in 1985, but the people who owned our house back then have told me that the bay laurel hedge around our yard froze completely and died back to ground level that winter. Temperatures went down below minus 20ºC, compared to the –10 to -12ºC we had a few days ago. Minus 20ºC is a few degrees below zero Fahrenheit. 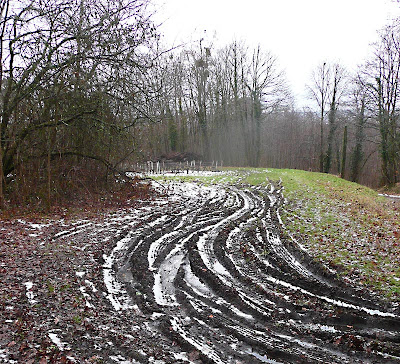 Tire tracks in the mud and the remains of the snow
Other news: rumors are that President Nicolas Sarkozy is going to declare his candidacy for re-election on the TF1 news tonight. One journalist described the build-up to his (expected) announcement as a case of faux suspense. (I won't even put those "French" words in italics.) The timing of Sarkozy's announcement fits a pattern; previous incumbent presidents have waited until late January, February, or even March to declare themselves candidates for re-election in May.

Presidential election campaigns have never dragged on and on for months and years the way they now do in the U.S. That's the trend here now, however. Last year the Socialists held a months-long primary campaign that was thrown for a loop by the Dominique Strauss-Kahn affair in New York and resulted in the nomination last fall of François Hollande.

Hollande, by the way is the former domestic partner of the 2007 Socialist candidate for president, Ségolène Royal. Royal and Hollande lived together for decades and have four children together. She got 48% of the vote against Sarkozy in the second round of presidential voting in 2007. 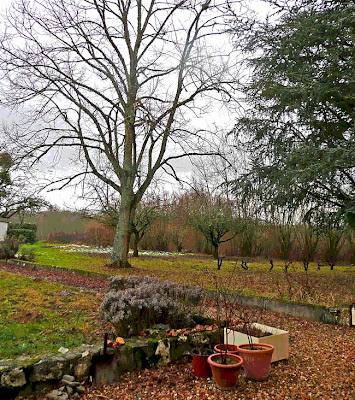 The view out the back door yesterday afternoon
The other big news is the price of gas/petrol and diesel fuel at the pump in France. The average price of diesel fuel (called gazole or gasoil) nationwide hit a new record of 1.41 euros per liter. That's the equivalent, at today's exchange rate, of $1.86 US per liter, or $7.05 per US gallon. About two-thirds of the cars in France have diesel engines. Nine years ago, when we arrived in Saint-Aignan, the price of diesel fuel was only about 85 eurocents per liter.

For gasoline (essence in French), the average price is about 1.65 euros per liter, or $8.25 per US gallon. That's premium; regular is slightly lower, of course. People interviewed on the news say that fuel for the car is becoming a luxury item. Prices in Paris are a lot higher than they are out in the country, and prices in the supermarket filling stations are lower than prices at name-brand service stations, especially the ones along the autoroutes, where tolls too increased significantly last month.

Luckily, our lifestyle doesn't involve much driving, and we almost never take the autoroutes, so we don't pay tolls. We fill the tank of the little Peugeot with diesel fuel about once a month. I feel sorry for people who have to commute long distances to work by car. They say fuel is even more expensive in Italy than in France.
Posted by Ken Broadhurst at 08:00