A pie of duck confit and Sarladaise potatoes

Confit de canard is duck that is slow-cooked in duck fat. Legs, thighs, and wings are the pieces used for confit; the breast is cooked separately, either grilled or pan roasted, and often served rare. The legs, thighs, and wings need long, slow cooking, until the meat is fairly falling off the bones.

There are several ways to serve and eat confit de canard. The leg & thigh sections can be taken out of the duck fat and roasted on a rack in a hot oven. The fat drips away and the duck becomes brown and crispy. Slow-cooked duck legs done that way are often served with fried or sauteed potatoes. 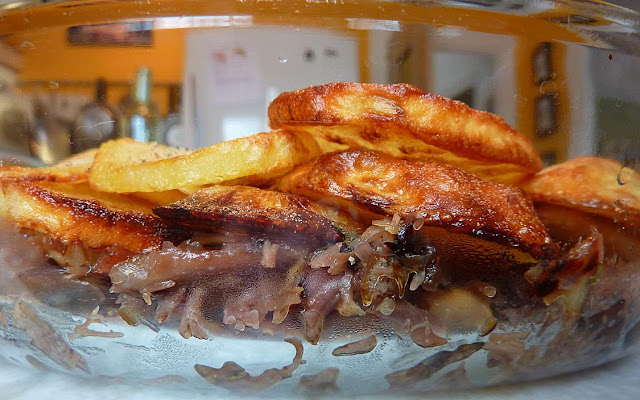 Duck-meat hash in a pie with sauteed potato slices 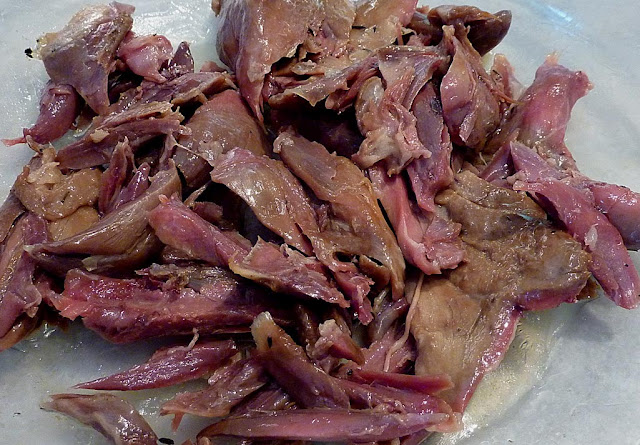 Nowadays, a third popular method of using confit de canard is to make and kind of parmentier — a meat and potato pie — with it. Again, you take the skin off the duck pieces and pull the meat off the bones. Chop the meat coarsely. Saute some diced onions and mushrooms (or truffles) in duck fat with herbs, and then add in the chopped duck meat to make a hash. Put the hash in a baking dish, cover it with a layer of mashed potatoes, and cook it in the oven. That was what I started to do last week with the three leg & thigh pieces of confit de canard I had left from December. (After cooking, the confit will keep for months in congealed duck fat in the refrigerator or a cold cellar.) I liked the idea of a meat and potato pie, but I wasn't sure I wanted to combine potatoes containing butter and milk (or cream) with the duck and duck fat. Duck isn't usually cooked in butter — at least not in the French southwest, where duck is a mainstay of the diet. 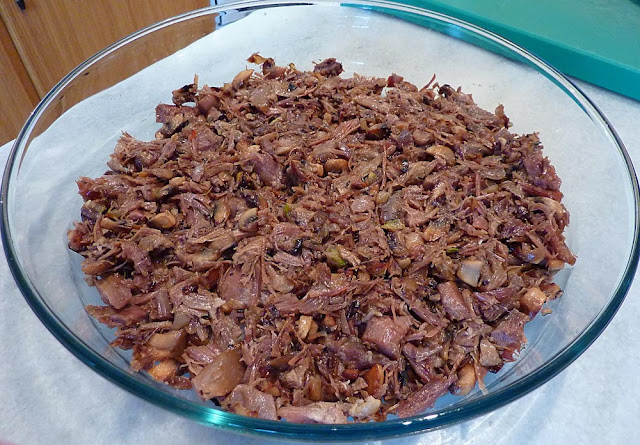 Spread the hash over the bottom of a baking dish

Instead, I decided to make sauteed potatoes, cooking them too in duck fat. Actually, the recipe for potatoes cooked in duck fat is a standard one down in the Dordogne and the town of Sarlat. They're called pommes de terre sarladaises. Slices of potato are first browned in the duck fat. Then they're left to cook with some garlic or even truffles on low heat in a covered pan. The potatoes are served soft and tender rather than crispy and crunchy. 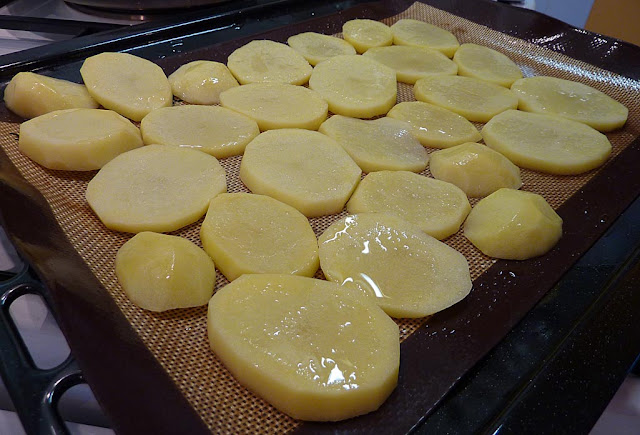 So why not a combination of hachis parmentier (a kind of shepherd's pie) and confit de canard, made with pommes sarladaises? Rather than saute the sliced potatoes in a pan on the stove, I decided to cook them in the oven by arranging them on a baking sheet lined with a silicone baking pad (parchment paper would work too) and brushing them with melted duck fat. 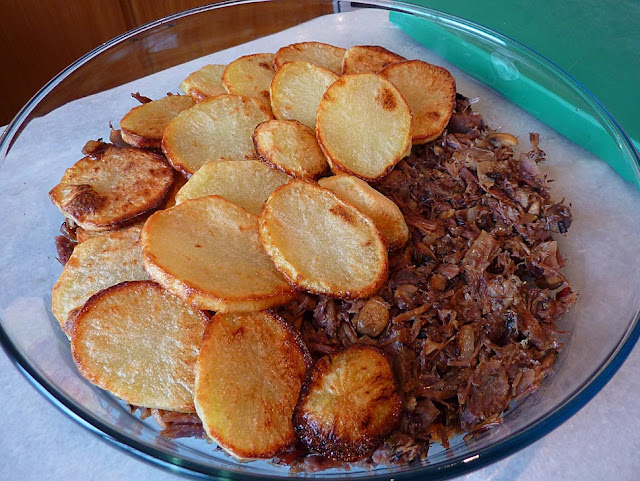 Arrange a layer of golden brown potato slices over the hash

I made a hash of the duck meat while the potatoes cooked and browned in the oven. When the potatoes were done, I spread the hash in the bottom of a baking dish and arranged the potatoes over the top. You of course could eat it just like that, with crispy potatoes. 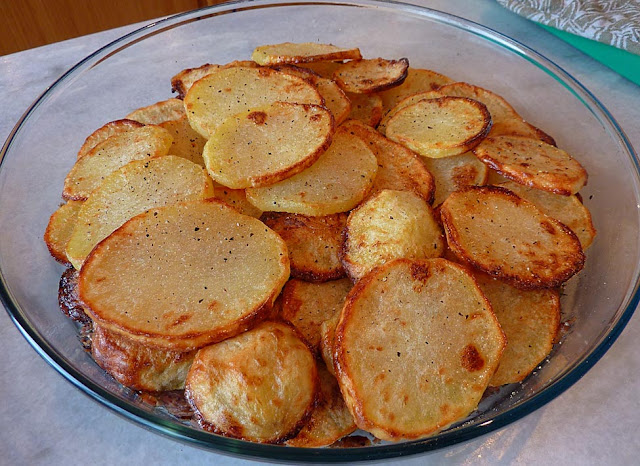 Or you can put the whole pan in a slow oven, cover it, and let it cook for another 20 to 30 minutes. The potatoes will soften up and continue cooking, taking on a texture that is closer to the texture of mashed potatoes than sauteed potatoes. And then you can cut wedges out of the pie and serve them the way you'd serve, well, a pie.

It's all about the texture you want. And you could use any chopped meat — beef, pork, lamb, chicken, turkey, rabbit... — for the hash and do the same thing. Instead of duck fat, brush the potatoes with olive or vegetable oil, melted butter, or pork fat — whatever goes with the meat you're using.

By the way, pommes sarladaises are also really good served with a grilled duck breast filet cooked rare.
Posted by Ken Broadhurst at 08:30