The gluten-free flour that is called sarassin or blé noir in France is used especially to make savory crêpes (thin pancakes). Blé noir literally means "black wheat" and it's what we call "buckwheat" in English, but it fact it's not a kind of wheat at all. Buckwheat crêpes are often called galettes (or galettes bretonnes) in France and come specifically from Brittany.

The reason buckwheat is called sarrasin is that the plant was supposedly brought back to France by the Crusaders in the Middle Ages. At the time, Europeans called the people of the Middle East "Saracens" and had found them growing buckwheat and eating the seeds as a cereal or grinding them into flour. 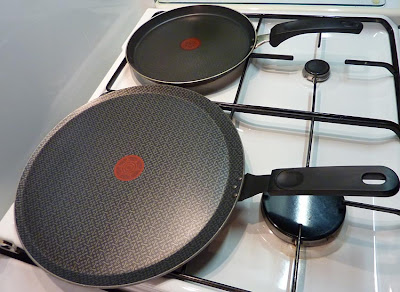 We recently acquired a new, larger crepe pan for making
galettes. The smaller pan is for making dessert crepes.
Buckwheat flour alone can be used to make pancakes, or it can be mixed with wheat flour. A typical recipe calls for just buckwheat flour, egg, salt, and water or milk, to make a thin batter. I posted a recipe back in 2009. Here's a gluten-free version: 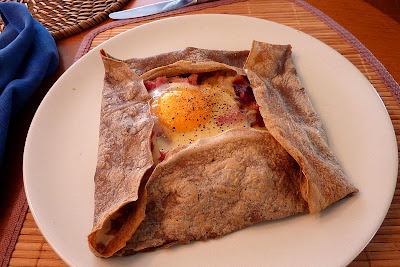 Put the buckwheat flour and salt in a big mixing bowl and make a well in the middle. Drop in the egg. Gradually stir in the water and then beat the batter to make it a little frothy. Let the batter rest for at least an hour. If it's too thick, stir in more water before cooking. [You want it pretty liquid to make thin pancakes.]

To finish the pancakes, put each one back into the pan, lay on a slice of ham (or two or three strips of cooked bacon), and sprinkle grated cheese over all. Fold up the edges of the pancake to make it into a square shape (see picture) and let the cheese melt.

Optionally, add sliced, cooked mushrooms and/or break an egg onto the center of each crepe. As you fill the pancakes, put them in a low to medium-hot oven to wait until you're ready to take them to the table.

If you're not worried about gluten, you can replace about a quarter of the buckwheat flour with regular wheat flour for a different texture.
Posted by Ken Broadhurst at 08:00