...and sausage from Toulouse. Saucisse de Toulouse is made with plain, unsmoked pork (lean and fat, of course). Because the sausage is seasoned only with salt and pepper, it's kind of a blank slate you can use with all sorts of flavoring ingredients and seasonings. Toulouse and Montbéliard, which is smoked, are two of the tastiest French sausages.

Espinaca con garbanzos — spinach and chickpeas — is a Spanish concoction served evidently in tapas bars as a kind of spread on bread. At least that's what I've read and been told. Walt has made it before, a couple of times. This last time, we added the Toulouse sausages, poached and then cut into thick slices. The spinach-chickpea mixture became a main course. 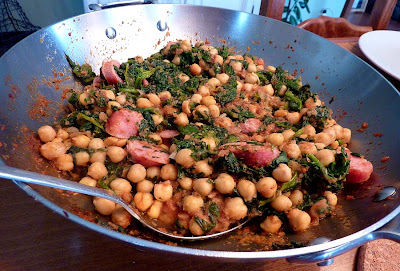 Spinach, chickpeas, Toulouse sausage, spices, and garlic
Besides the spinach (fresh or frozen, pre-cooked) and chickpeas (out of a can or dried, cooked), the dish depends on a thickening sauce made with bread crumbs, garlic, tomato sauce, herbs, olive oil, and a little bit of vinegar. Brown the bread crumbs and chopped or pressed garlic in olive oil, and then add just a little tomato sauce and vinegar so that you have a thick paste.

Herbs and spices to use are cumin, paprika (smoked, hot, or sweet), thyme, rosemary... whatever you like... along with salt and pepper. A squeeze of lemon juice at the end will freshen it up. Serve it hot, warm, or even cold. This is not so much a recipe as an idea that you can customize.

Here's a link to the recipe that Walt says he found and followed, and that we really like.
Posted by Ken Broadhurst at 07:03