“France is shivering...” Our temperature this morning is –8ºC; that's +17.6ºF. The cold wave is expected to last into the middle of next week, and more snow is predicted for Sunday. It's cold in France, but it's even colder in Eastern Europe, and it's colder in the eastern half of France than here on the west side. 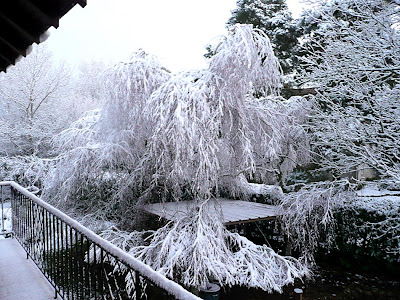 So far, our pipes haven't frozen. The house is warm enough in the afternoon and evening. We still take the dog out on her regular walks, but today we have to drive her over to the veterinarian's office. Callie has developed a cough. It's gotten gradually worse over the past two or three days. 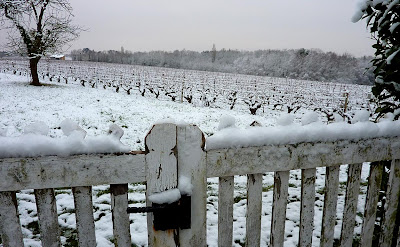 The dog is still eating normally, and she's energetic on the walks. She ran after a deer yesterday afternoon. However, she sleeps during much of the day, and isn't as interested in playing indoors as she was a week ago. We don't know if the cough is related to the cold weather. 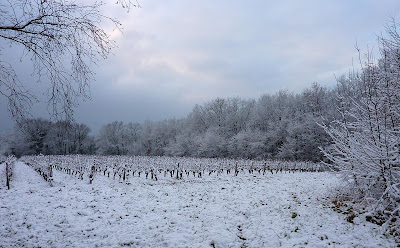 Bertie the Black Cat seems to be doing fine. He's been coming into the house in the afternoon and either spending some time sitting on the fireplace hearth by the wood fire, or sleeping with Walt on the downstairs sofa, which is also near the fire. Callie stays upstairs in the loft space, sleeping. 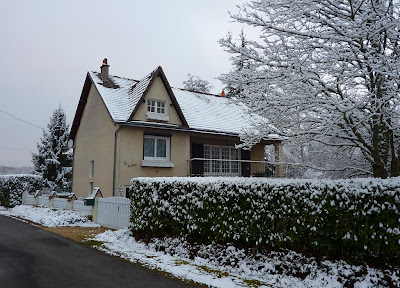 The loft space we had finished off in 2010 is well insulated, and it doesn't get too cold up there. There's a light wind from the northeast these days, but it's not strong enough to be a problem. We still turn the heat off overnight, and the house is pretty cold in the morning. Right now, the inside temperature is just 11ºC, or 52ºF. It's slowing warming up. 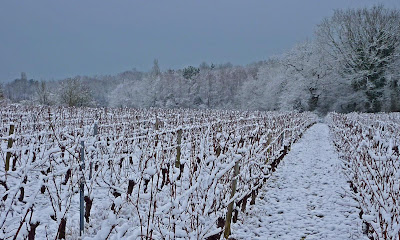 We've had colder mornings here at La Renaudière since 2003, but not many. The pictures in this post are ones I took around the vineyard and hamlet on Tuesday afternoon. The snow has melted a little since then, and the north wind has blown some of it out of the trees. Even though afternoon temperatures stay below freezing, the sun shines brightly, resulting in some snow melt.
Posted by Ken Broadhurst at 07:45