During the recent spell of frigid weather, I started working on my recipe collection. Over the past eight or nine years, I've collected quite a few recipes, mostly from the Internet. Some are in French. Some are in English. When I find an interesting recipe, I copy the text, paste it into a word processing file, and re-format it, adding my own notes or modifications after I've made whatever the recipe describes. 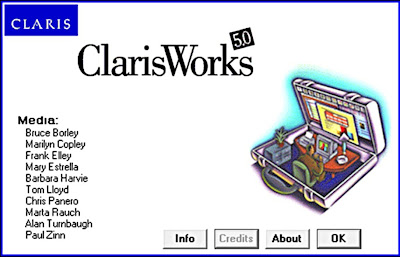 I'm not scrapping ClarisWorks, but just saving files
in a more widely used format from now on.
The word processor I use is a very old one, by software standards. It's the word-processing application in ClarisWorks for Windows version 5, which was released in 1997. Un logiciel d'époque, on pourrait dire — a real antique. I worked at Claris for six years in the 1990s, before Apple laid 400 of us off in 1998 and closed down the company. Claris had been Apple's end-user software subsidiary for 11 years.

When it comes to ClarisWorks, I need to move on, but I've never found another word processor that I like better. One day, with changes in the Windows operating system, the old software will just stop working. When that happened, I'd be stuck with a lot of useless files, and my recipe collection would be lost. Already, I'm seeing a lot of bugs in ClarisWorks under Windows 7. 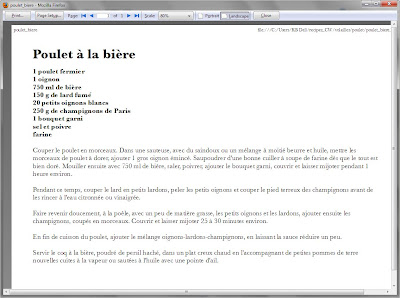 A typical recipe, now an HTML file I can open and print
using Firefox, Chrome, or another web browser
During the cold snap, while I was looking for a way to keep busy, I decided the time had come to work on all the recipes I have archived in ClarisWorks format and save them as HTML files, which we can open all open on our computers these days. And now I've done it. I had to process the files manually by opening each one in ClarisWorks and re-saving it as HTML — a laborious process.

Lucky for me, ClarisWorks has a good HTML export filter. Re-saving all my files took me several days — well, not full days, because my back would start hurting after a couple of hours in front of the computer so I'd stop for a while and do something else. Go cook something, for example. Take a walk with the dog. 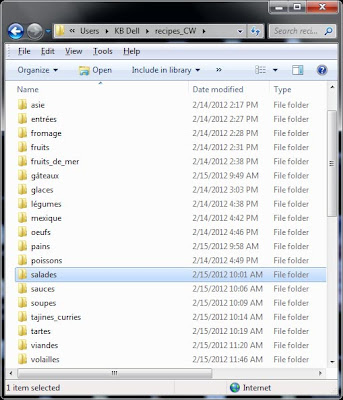 The collection by category — more than 1,000 recipes
How many recipes did I convert? Between a thousand and twelve hundred. I didn't count them with any precision, but there are a lot of them. Most are filed by category, but I still have a couple of fat folders of miscellaneous recipes I need to move into the appropriate folders. It feels good to get the collection organized and "modernized" — informatiquement parlant. It's a job I had put off for years.

The Internet is an endless source of new recipes and cooking ideas, but it's nice to have your old favorites in files organized by category and in a format you'll be able to work with for the foreseeable future. You hope.
Posted by Ken Broadhurst at 07:52