The temperature on our thermometer this morning is –6.3ºC, which translates to just under +21ºF. For this part of France, that's very cold. It's not a record, but after the mild weather we had in December and January, it's kind of a shock to the system. 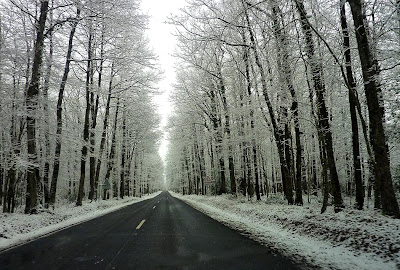 Driving through the forest south of Saint-Aignan
When I got up at 6:45 a.m., the temperature in the house was 11ºC, or 52ºF. It will take a while for the boiler to heat the radiators up enough to get the temperature up to a comfortable temperature. On TV, they are asking people to moderate their use of electricity by keeping lights and unnecessary appliances turned off, and but trying not to turn the heat up too high. There might be brownouts in some regions. 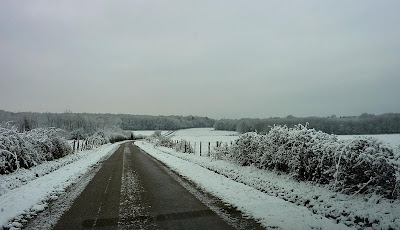 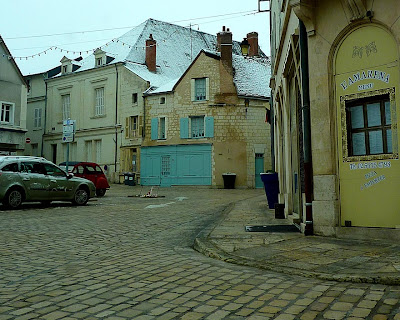 The market square in Saint-Aignan
Well, you'd be hard-pressed to find a gold coin in our house. Maybe what they call a pièce jaune — a "yellow coin" and that means one worth less than a euro — will do the job. We will definitely be making crêpes. Two kinds: crêpes de sarrasin — buckwheat pancakes — which are filled with and folded around savory ingredients like ham, cheese, eggs, and mushrooms; and crêpes de la Chandeleur — dessert crêpes — that are served with additions like melted butter, jam, sugar, melted chocolate, lemon juice, or liqueurs. 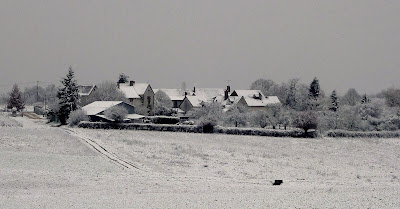 A hamlet called La Pounière on the outskirts of Saint-Aignan
La Chandeleur is the name of the holiday that falls on February 2. It's called Candlemas in English. I post about it nearly every year. (Wow, the years are flying by.) if you want to look back and read more about it, here are some links: 2006, 2009, 2010. 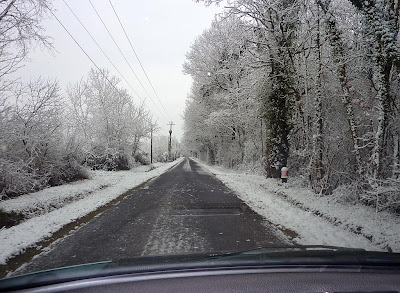 The road from Mareuil to Orbigny is just barely wide enough
to allow two small cars to get by each other.
It snowed on Monday, and we still have snow on the ground. On Tuesday morning, I drove out to Orbigny, a village south of Saint-Aignan, to see a friend who lives there. It's about a 10-mile drive. Along the way I took the pictures you see here. 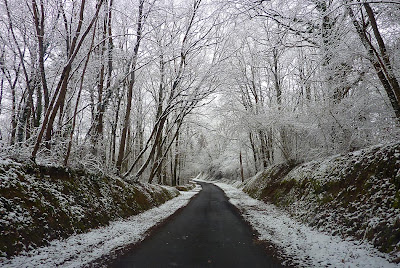 The road up to our house at La Renaudière
The roads were a little icy but I didn't really feel the car slide around at all. On the way to Orbigny at 9:30 in the morning, I drove 30 m.p.h. the whole way, just to be safe. Almost nobody else was out — I saw one other car. On a slightly wider road on the way home, I felt safe going along at 40 m.p.h. There was so little traffic that I was free to stop wherever I wanted and snap a picture or two.
Posted by Ken Broadhurst at 08:15