Driving or walking, slipping and sliding

I went for a drive yesterday. I didn't take my camera — too distracting. I didn't know what state of iciness to expect on the roads. The temperature was well below freezing when I left home at 9:30 a.m. The road down out of our little hamlet was clear, and the bigger road to the village center two miles away was mostly clear too, with only a few icy patches.

After I turned south to drive to the next village south, Orbigny, the situation was different. It's only seven or eight miles from Mareuil to Orbigny, but it took me a while to get there. In places where the road surface is exposed to sunlight, there was evidence of some melting, but you have to beware of black ice. In other places, especially where the road runs through woods and the roadway is shaded — a good part of the distance — as well as all the way through the little settlement called Les Bucherons, the snow hadn't been plowed and hadn't melted at all. The road was covered in slick snow that had been packed down by car tires. 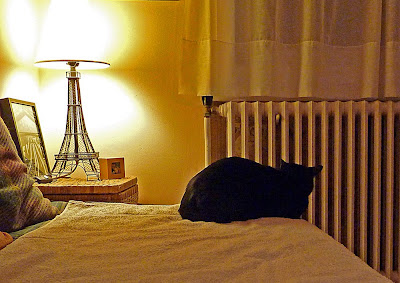 Bertie sleeping this morning next to his favorite radiator,
soaking up some warmth
I was headed to Orbigny to pick up a friend and take her with me to the supermarket for my regular shopping. Her car gave up the ghost a couple of weeks ago, just as the weather turned so frigid. Her house is cold too — when I got there, the temperature in the downstairs living/dining room was 11ºC, which nobody could call comfortable. It's 11º in our living room this morning, but I've got the heat on now and the temperature will slowly rise to 18 or even 20 over the next few hours. Not everybody is so lucky.

The road that runs directly from Orbigny to Saint-Aignan was not as icy as the little road I had driven a few minutes earlier to get to our friend's house. It's a wider road, with room for two vehicles to pass each other without one or both of them having to pull off onto the (snowy) shoulder. It passes through a mile or two of forest, and there the road surface was pure ice. I didn't slide around very much, but my anti-lock breaks got a good workout. I could feel the brake pedal pulsing every time I pressed on it. 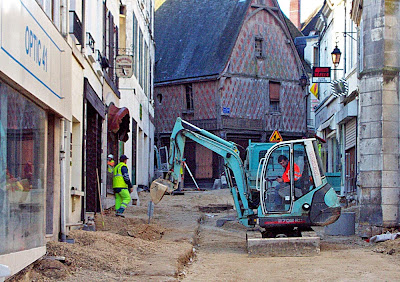 In February 2003, the main street in Saint-Aignan was done up
in cobblestones, after years of being paved with asphalt.
After the shopping trip at SuperU, a big hangar of a sheet metal building where the heating system is completely inadequate to cope with the current weather, we went into old Saint-Aignan, where we both had a couple of errands to do. By the way, the streets and squares in the old town have been completely redone in cobblestones over the past 10 years. 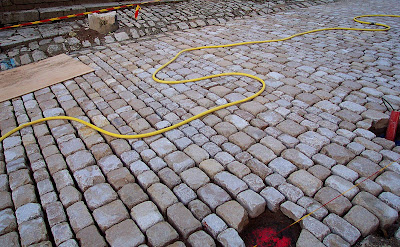 Pretty and quaint, but treacherous in icy weather
Those cobblestones were shiny with ice yesterday, all around the town. The tops of the stones are smooth and slightly rounded. The pavement slopes along the edges of the streets, where pedestrians are supposed to walk. At one point, and older lady stood at the intersection in front of the post office warning people, including me, not to try to walk on the sidewalk. It was too treacherous. "Walk out on the road, where the cars drive," she said. "They've salted and gritted the road, but not the pedestrian walkways. Regardez comme ça brille." 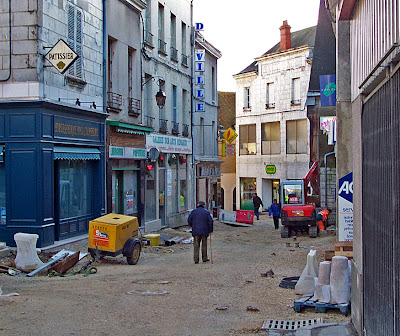 Saint-Aignan's main street being repaved in February 2003
My friend and I got a coffee in one of the local cafés, Le Lapin Blanc, and ran into a German woman who has lived in the Saint-Aignan area for many years. She said her house is cold too, but she has a big fire burning in the fireplace. The supermarket had been pretty crowded, but the streets of Saint-Aignan and the cafés were occupied by just a few hardy souls yesterday morning. I didn't see anybody slip and fall, but we were all being exceedingly careful. 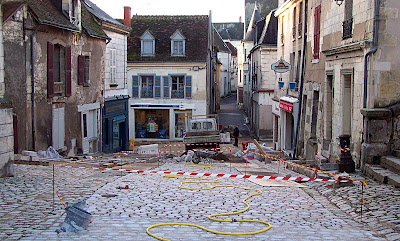 The streets were a real obstacle course nine years ago.
Then it was time to drive back to Orbigny and, for me, back to Mareuil. The whole round trip measured nearly 40 miles. It made me realize that I'm happy not to have to do that kind of driving more than once in a while in this weather. I won't be going out again this weekend, barring the unforeseen. Driving was nerve-wracking. Dangerous. Frigid. And beautiful, by the way. It was kind of fun.

The temperature this morning is minus 8ºC. Yesterday afternoon it got almost up to freezing outdoors, but not quite. The thaw will come Monday or Tuesday. But on Monday, the forecast is for rain! The rain will freeze on the frozen ground and roads. For a day or two, they are saying, we will probably be living in a vast ice-skating rink.
Posted by Ken Broadhurst at 07:30