For two nights in a row I've tried to get the boiler regulated so that the radiators all through the house will stay warm and keep the temperature warm but not too warm. Night before last, I set the dial to the night-time setting and turned the temperature down slightly. The result was that I woke up suffocating at 3:00 a.m. I really don't like sleeping in a heated room.

In the middle of the night, then, I had to go down and turn the boiler completely off. By the time I got up (again) at 7:00 the temperature in the house was down to 11ºC (which is about 52ºF). It took two or three hours to get it back up to a comfortable level (which for us is about 65ºF/18ºC). However, I talked to a friend yesterday and she said she hasn't been able to get the temperature inside her house up above 12/54 this whole week.

So I guess I shouldn't complain. I'm sure a lot of other people are shivering these days too. And many are dealing with frozen pipes, which is a problem we haven't had (knock on wood). The weather widget on my Windows 7 desktop says the temperature in Saint-Aignan this morning is a balmy –17ºC ( between +1 and +2 on the Farenheit scale). That's an aberration, I'm sure. Our thermometer says it's closer to –10. 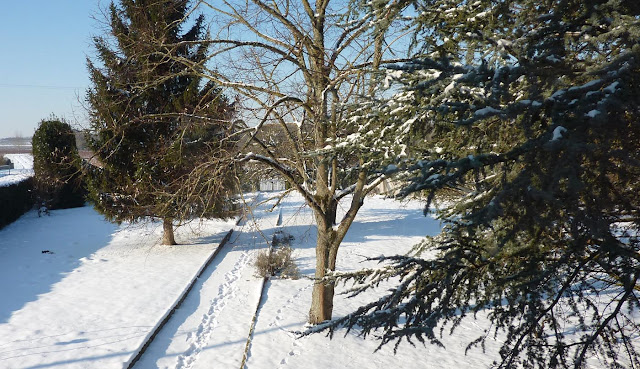 Just what you wanted to see: more snow pix.
They say we might have a thaw by Monday or Tuesday.

What they are saying on the TV news is that it's not so much that temperatures are frigid — they've been as low or lower in the past — but that the cold snap is lasting so long. Crops are freezing in the ground, even inside greenhouses. The rivers, including the upper Loire and the Rhine along the Alsace-Germany border, are frozen over. Even the Canal St-Martin in Paris is frozen over. I haven't been down to see if the Cher is ice-covered.

The last time I remember weather like this in France was in 1978. It was also very cold — colder than now — in 1985 (I wasn't living here then). Right now, our house is getting colder and colder with each passing day. It's a losing battle, despite the fact that we are using the central heating system a lot more than we normally do, along with having roaring fires in the woodstove every afternoon and evening.

So last night I tried once more to change the settings on the boiler to get it to keep the house just minimally warm. Can you believe we don't have any thermostat in the house? I guess we need to get one installed. These days, I think you can get a thermostat that's a remote-control unit. As for the boiler settings, I was once again unsuccessful.

I woke up at about 2:30 a.m. and I could hear the pump on the boiler running. I came downstairs and touched some radiators. They were almost stone cold, and the house was cold too. I guess I turned it down too low. When I hear the boiler running for nothing, I think about the small quantity of heating oil that we bought in January to get us through the season, and how much it cost. It was 265 U.S. gallons, and it set us back more than $1300 U.S. (just over a thousand euros). I don't want to waste any of that precious substance.

When I went down to tinker with the boiler one more time, I of course woke up poor Bertie, who was sleeping down there in the cold. Finally I decided just to turn the boiler on, take the cat upstairs with me into the relative warmth, and block the dog in up in the loft, where Walt was sleeping. That worked.

I got out a couple of blankets, took the cushions off the downstairs sofa, and made up my temporary bed. Bertie jumped up and slept on my chest and abdomen for a couple of hours. I of course couldn't move without knocking him off, so I wasn't very comfortable, but I did sleep a little. The house started warming up a little bit more with the radiators back on. 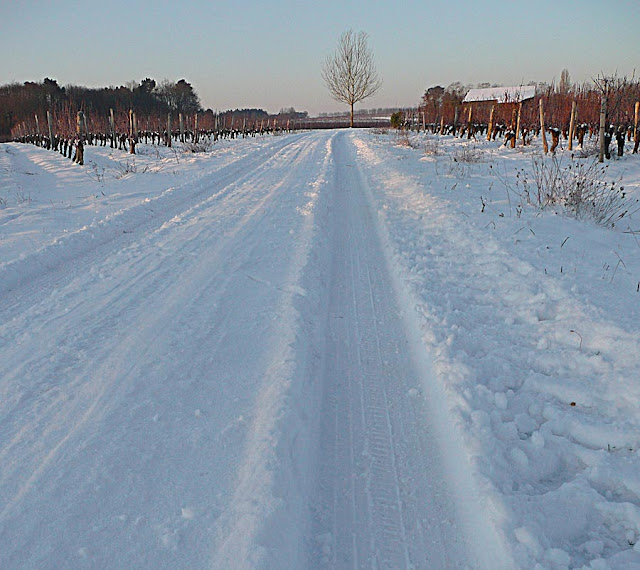 I have to go out and tromp around in this with the dog
in a few minutes — unless Callie chickens out.

At one point, Bertie got up and had a long drink out of Callie's water bowl. I was able to move around and find a more comfortable position, on my side. Bertie came back and slept next to me instead of on top of me for a while. Then, the last I remember, he climbed up on my side, sort of on my shoulder, and he slept perched up there for a couple of hours. Again I couldn't move, but I slept. We woke up at 6:45 and I fed him. He's still in the house.

Sometimes I feel like Callie is just not being cooperative. She lunges at Bertie, barks, and tries to bite him. He panics. We have to keep them separated. I don't think Callie really intends to hurt the cat. She must see him as an intruder, and as an animal to be herded. That's a border collie's nature. I don't think it will ever change. I try not to despair.
Posted by Ken Broadhurst at 08:05