The hamlet where we live near Saint-Aignan is made up of 9 houses located between vineyards and woods. It's a hamlet in French — un hameau — because it is a group of houses without a church. If it had a church, it would be a village — un village. Most villages also have a shop or two and maybe other businesses in them, but hamlets usually don't. Ours doesn't.

The hamlet is just two miles (3 km) from the center of Saint-Aignan, and it is also two miles from the center of the village whose territory it is administratively a part of. The paved road ends at the hamlet but continues as a gravel path for tractors, cars, and trucks that drive into or through the vineyard. The gravel road is a mile long and gets almost no traffic. At the other end it joins two paved roads at their intersection — one of those is the Route Touristique that winds through the local (Touraine) vineyards. 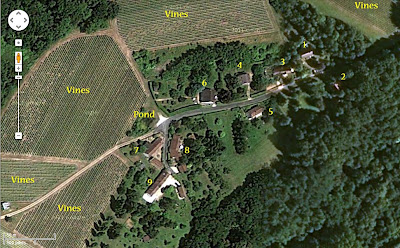 The paved road comes in from the right, through some woods,
and ends at the pond. Our house is no. 6.
I like the feeling of being out in the country without being isolated at all. We have several supermarkets within three or four miles' drive, and there are outdoor markets nearby on Saturdays and Sundays. Saint-Aignan is close, and the comparable towns of Montrichard, Contres, and Selles-sur-Cher are just 10 miles from us. They all have supermarkets and weekly open-air markets too, as well as central business districts.