It was about 5:30 yesterday afternoon. Walt had gone out to walk with the dog a little earlier than usual. We'd had hazy sunshine all afternoon, after a couple of hours of fine rain in the late morning.

I was sitting at my computer, looking at blog comments, e-mails, and newspaper headlines. As I looked at the screen, I kept hearing rumbling sounds. Was the furnace on? I didn't think it was. Maybe it was an airplane going over. But it would have to be more than one plane, because the rumbling noises kept starting up again and again.

Did I tell you you that we heard a big boom a few days ago? I was on the phone with our friend Cheryl in California, around
7 p.m. France time. She had talked to some mutual friends who live near Christchurch, in New Zealand, and found out they and their house survived the big quake. That was good news. Then, in the middle of our conversation, there was a loud boom that rattled the windows. From downstairs, Walt said he felt the whole house shake. 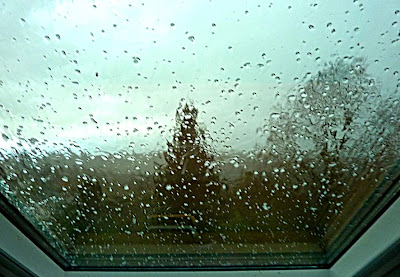 After Walt went outside and inspected the exterior of the house, we decided that it was a sonic boom, and we heard planes go over for hours that evening. We wondered if it had anything to do with evacuating French ressortissants (the word for "nationals") from Libya. But we never found out anything more about it. Friends of ours who live seven or eight miles east of us also heard and felt the boom, though. 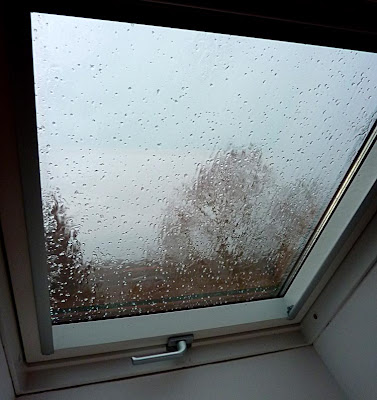 With these Velux roof windows, you can
always tell if it's raining or not.
Yesterday it wasn't a sonic boom or an earthquake. I finally got up and opened up one of the Velux windows here in our loft. What I saw was a jet black sky off to the northwest. And the rumblings were thunder. Then I saw Walt and Callie coming down the vineyard road toward the house.

Walt said he not only heard the thunder but from his perspective he could see amazing flashes of lightning. The storm seemed to be going by to the north of us. Then suddenly there were some strong gusts of wind and rain started falling. Actually, it was a little bit of rain mixed with a whole lot of ice pellets. 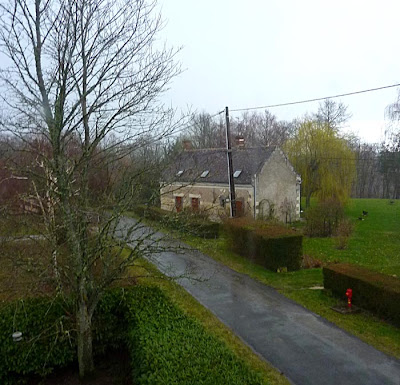 Our neighbors' little summer/country house, across the street
One advantage of having these skylight windows up here in the loft is that it's easy to see if it's raining outdoors — or snowing, or hailing. What we had yesterday was an ice shower. It fell pretty hard and made a lot of noise on the skylights. It lasted about an hour. There wasn't enough ice, or the pellets weren't big enough, and the wind wasn't strong enough, to cause any kind of damage.

As it had appeared to be doing, the thunderstorm passed by to the north of us. I imagine Blois and Chambord took the brunt of it. Or Chaumont and Onzain. Amboise maybe. We were just on the southern edge of the real weather. 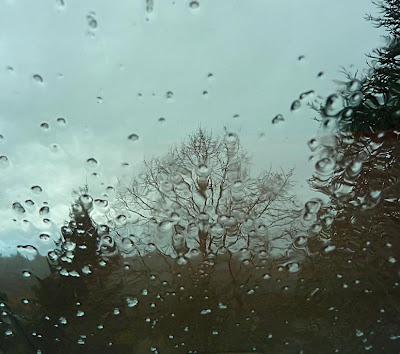 A giboulée de mars blew through yesterday, two days early.
Now I know it's springtime. That was what in France is called
« une giboulée » — a sudden downpour, an ice shower, a gust of wind, with dark skies — and giboulées don't last long. They are cold though, and if you get caught outside during one you'd better have rain gear or, in town, at least an umbrella.