Gray, and then rain, but green

I don't have a lot to blog about today, so I'll talk about the weather again. We all do it. 'Tis the season.

I kind of like the weather maps that they have on the France 2 television web site. Here's the forecast. On the left, you have today's afternoon weather. On the right, it's the forecast for tomorrow morning. Rain is coming in. Mais rien de bien méchant — just showers. I put Tours and Paris on the map for reference.

Gray today, gray and damp tomorrow
(those are centigrade temperatures of course)
Meanwhile, the pond out back has been overflowing, as I've said. Again, nothing very serious, but the pond is really full. A day or two I saw a couple of toads swimming in it. It's nearly the toad breeding season. They come in from all around the vineyard and hamlet to do what they do at this time of year. Toads here are a harbinger of spring, and the last gasp of winter. 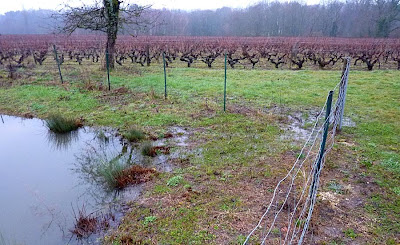 The overflowing pond by the vines
In some years there are hundreds of toads all up and down the road and in our back yard this time of year. Callie loves to chase them. They are not the most attractive animals on the planet, however, and I really don't want the dog to catch one. I hope that toads smell or taste bad to a border collie. 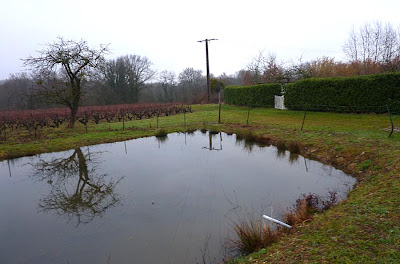 Our pond will soon be full of brown toads
Meanwhile, the San Francisco Bay Area where we used to live, and where we still have a lot of friends, is getting the really cold weather right now. Temperatures are supposed to drop below freezing possibly right down to sea level — that's a rare event out there, except at high altitudes. It might snow this weekend in SF and in Silicon Valley, they say. 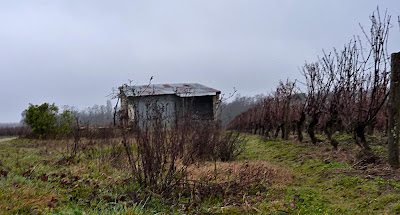 We haven't had a hard freeze in weeks and weeks
here in Saint-Aignan.
I remember that back in 1990 we had a very sharp cold snap in San Francisco. Walt and I lived in a top floor apartment on Gough Street near Sutter, and we had a skylight in the bathroom that wasn't at all airtight. It got so cold outside that December that even with the heat up full blast we couldn't get the temperature in the apartment above about 55ºF.

The worst thing was that the temperature went below freezing, and a lot of beautiful succulent plants and trees were killed. We had been out there for three or four years already, and we were used to being able to leave potted plants outside on the balcony year-round. Many froze, as did a lot of beautiful old plants in people's yards and gardens. 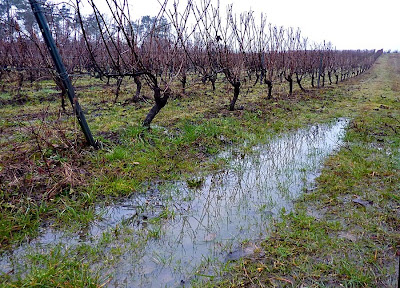 It's been really wet, however, and
we could use some sunshine.
Anyway, it's all what you are used to and prepared for. Temperatures just a few degrees below freezing don't seem like a big deal in most places, including Saint-Aignan, but in other places, where freezes are so few and far between, nobody is really prepared for the consequences. Oh well, it's not an earthquake at least.
Posted by ckb at 07:55