Walt went to the Saturday-morning market in Saint-Aignan yesterday to look for locally grown asparagus. He found some. It was a man we often buy asparagus and strawberries from who had asparagus at a reasonable price — 6.00€/kg, or just over $3.50/lb. in U.S. terms, at current exchange rates. 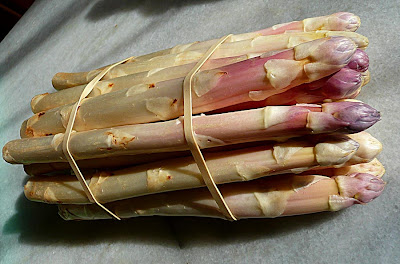 Asperges blanches
The dollar is worth about 75 eurocents right now; that's the euro being worth $1.31 U.S. The euro went up to almost $1.60 last summer, so we were getting only about 63 eurocents for a U.S. dollar. It's better now, but when you live here with a limited income in $$, you have to pay attention to costs.

Anyway, you can see the difference between the asparagus we buy and the ones that grow untended out in the vineyard. The vineyard asparagus are the green ones. The cultivated ones, grown here along the Cher River Valley and over in neighboring Sologne, where the soil is sandy, are grown buried in sand so that sunlight doesn't turn them green. 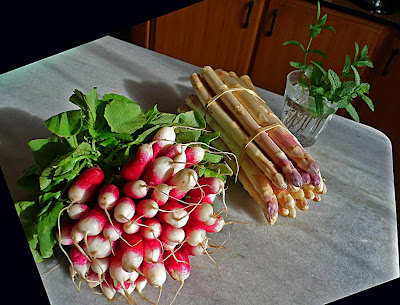 Radishes, asparagus, and mint rooting in a glass of water
It's hard to say which is better, green or white asparagus. They are the same plant — only the growing methods are different. With the white ones, you have to peel each asparagus. Green ones don't need peeling. And the white ones take longer to cook. They have a more delicate, less asparagus-y flavor, maybe. We like both.

Oh, I almost forgot to mention our experiment with true wild asparagus. A few days ago, we cooked the slender stalks I had picked out back. Because it was an experiment, we decided not to cook the wild asparagus into an omelet or scrambled eggs, but to cook them separately and try them. To go with them, we made a mushroom risotto. Well, the wild asparagus turned out to be bitter. Almost too bitter to eat. I ate some by cutting them into small pieces and mixing them into the risotto. But I can't say I thought they were very good. Tant pis. 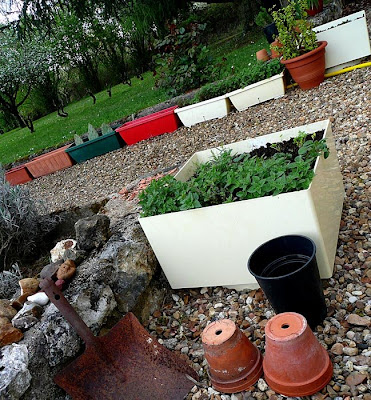 Herbs in planters. Mostly you see oregano.
Also cactus pads and a desert jade plant.
The other spring vegetable Walt picked up at the market was a big bunch of radishes. French people eat a lot of radishes. First you wash them well to get rid of any sand. You take them to the table slightly damp with the clear fresh water you washed them in. Then each person puts a pat of butter and a little pile of salt on a plate. Spread a little sweet butter on a nice piece of French bread. Take a radish and touch it to the salt so a little bit sticks to it. Then eat a bite of the salty radish and the crunchy bread spread with sweet butter. Now I'm hungry. 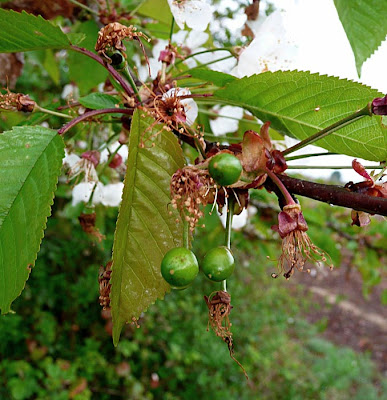 One of the trees I'm keeping any eye on out in the vineyard
now has fruit on it. Plums, I guess. I'll soon know.
For lunch Walt is going to make an asparagus and ham pie. More on that in a day or two.

Another spring food is herbs. We've been lucky this year. Our parsley came back up and is green and leafy. It's more beautiful than it was last summer. And mint that we planted last summer has come back up too. It was attacked by an insect (we assume) last summer. All the leaves were completely covered underneath with what I assume was insect eggs. We couldn't eat it. Mint is supposed to be invasive, but ours died back while the parsley next to it thrived. 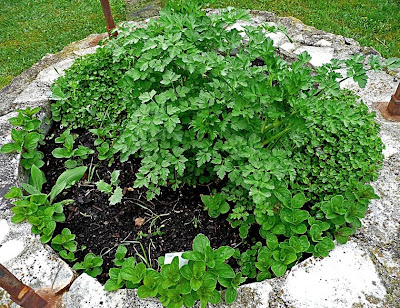 Parsley and mint growing in the well
I've also planted chives and some other mint in planter boxes. We gave up on the herb garden last summer. Weeds took it over when the weather was rainy, and it's hard to go weed it in rainy weather. So we are going to grow herbs in pots and planter boxes this year.

Last June CHM came to visit and he bought us a couple of tarragon plants from a vendor at the farmers' market in Montrichard. We planted them and they did fine. At the end of the growing season, I dug them up and put them in pots for the winter. I left the pots of tarragon outdoors, at the base of the south wall of the house. I didn't know if they would survive. 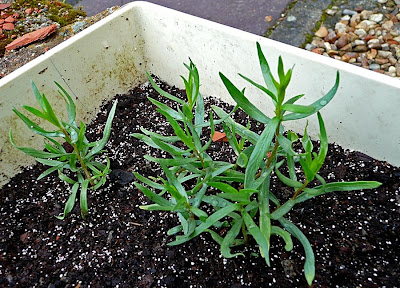 Tarragon survived the winter
Well, they did we have a couple of tarragon plants now. I've transplanted them into good potting soil. I want to save them, because the plants were very expensive — 6.00€ apiece. Chicken with tarragon is a classic combination. 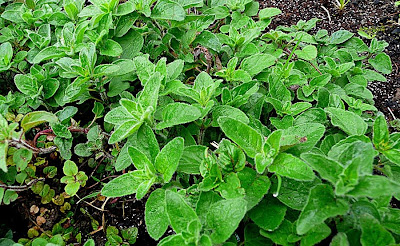 Oregano
Another herb that reseeded itself, or grew back from the roots, is oregano. I've transplanted a lot of it from the abandoned herb garden plot (where we will plant vegetables next month) into planters. It is thriving too. It has nice flowers in summertime.

I foresee lots of herby salads over the course of the summer.
Posted by Ken Broadhurst at 08:52