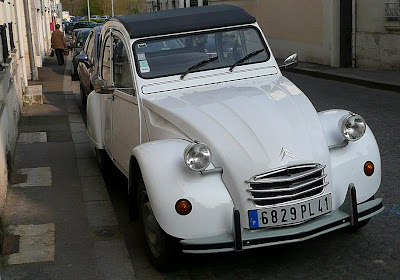 A spiffed-up old Citroën 2CV parked on a street in Saint-Aignan
Nadège says in a recent comment that none of the people she works with can pronounce the French first name Gilles. She's working with Gilles Marini, who played Dante in Sex and the City: The Movie. Nadège is a makeup artist in Hollywood. 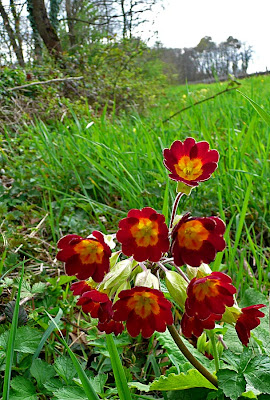 The red cowslips were still there a few days ago.
Well, Gilles is hard to pronounce for Americans because we don't have any words in English that begin with that voiced sibilant sound. We have [sh] but not [zh] as an initial consonant — [sheep] for example, but not [zheep]. We do have the [zh] sound, however, in the middle of words like treasure, pleasure, and measure (all pronounced [-'eh-zhoor]). It's the same sound that is the final consonant in Nadège [nah-'dehzh].

French is full of words that have [zh] as the initial sound: je, jeudi, jouer, jurer, jamais, gîte, giboulée, Giverny, and on and on. Maybe telling people that Gilles is pronounced [zheel] will help.

* * * *
A few days ago Callie found a hedgehog in the yard. Well, a hedgehog that was trying to get into the yard. It was stuck in the fence. Callie was doing her daily early-morning inspection tour when she started barking wildly.

I went over to see what the problem was, thinking she might have chased a cat out of the yard and into the hedge. But the barking was too hysterical. And there was the poor hedgehog, wedged in and trapped. 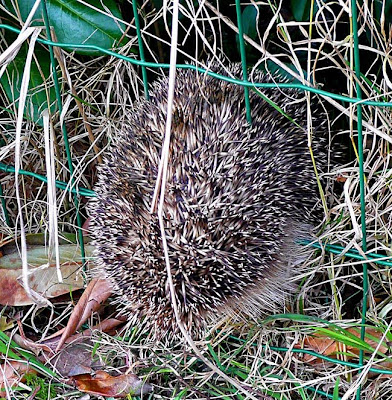 A hedgehog stuck in the fence
I told Walt about it when Callie and I got back from our walk. He put on some very heavy leather fireplace gloves and went out to see if he could extricate the poor animal. He succeeded, only getting stabbed once or twice by the hedgehog's quills. He stretched the wire fence and little and pushed the animal through. It rolled itself up into a tight ball and stayed there under the hedge for the rest of the day. We wondered it it was injured or even dead. 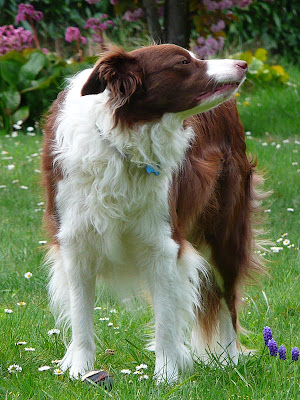 Callie loves being outside on warm afternoons.
The next morning it was gone. Hedgehogs are nocturnal. It was probably just waiting for nightfall before making its move. Hedgehogs are also animals you want to have in your garden, because they eat slugs and bugs. It's too bad they can't fit through the slots in our wire fence. Maybe that one was just overweight. 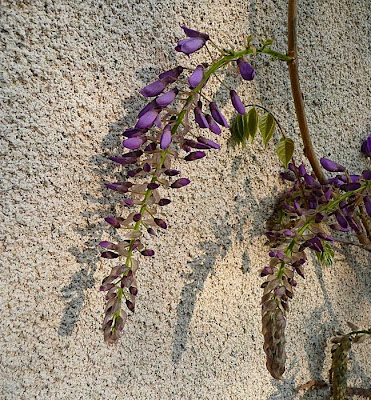 The wisteria is starting to bloom.
The plum and pear tree blossoms are now falling, and the cherry blossoms are not far behind. I'm getting worried that our weather is not yet warm enough for all these trees to actually set fruit. I think chilly damp weather is not ideal at this stage in their development. 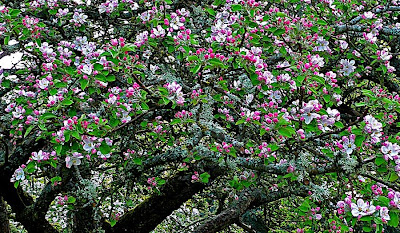 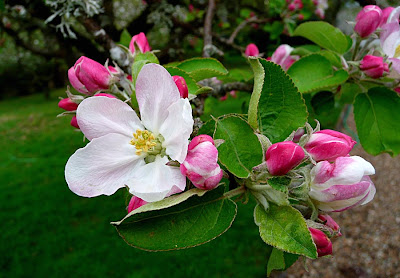 Apple blossoms, a wide shot and a close-up
Now the apple trees and the wisteria are blooming. I wish we knew how to keep the apple trees from setting fruit. Thousands of apples — it seems like millions — cover the ground under the five apple trees in our yard for most of the summer. We can't use them all, and we can't even give them away because everybody we know has just as many apple trees and apples as we do. 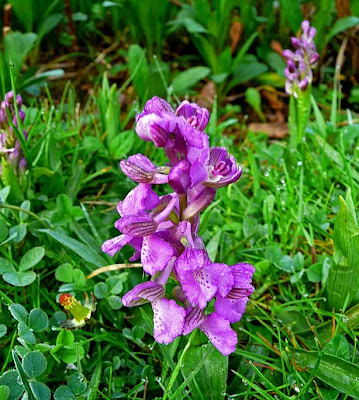 And I found these little orchids growing in our back yard...
Meanwhile, we're happy because parsley, oregano, mint, and tarragon from last year's garden have all come up again and look really healthy. Our thyme and rosemary plants also survived the cold winter. Now if we can just get some good tomatoes and eggplant going in the veggie garden, we will be sitting pretty.
Posted by Ken Broadhurst at 08:15