The house and the bilingual dog

Even though it is only moderately picturesque, I never get tired of taking pictures of our house from out in the vineyard. This is a series from farthest out to closest up that I've taken over the past week or so. It makes me remember how lucky we were to find place in such a setting. 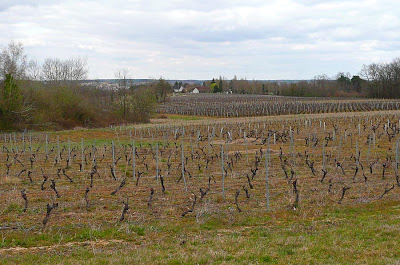 The Renaudière vineyards and the hamlet called
La Renaudière, near Saint-Aignan-sur-Cher
The sky has been what the MétéoFrance forecasters call laiteux — milky — for a few days now. We're in that exceptional April period when the weather is better up here in the north of France than it is down south in places like Provence and the Nice area. They're having rain, and we are getting just the edge of the storm, with thin clouds, here in Saint-Aignan. Farther north, the skies are bluer and sunnier, they say. 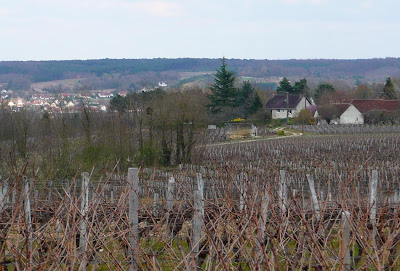 Our house is the taller boxy one with the dark brown roof tiles.
The houses on the left are across the river valley from us.
By the way, the Guerriers, our winemaker neighbors whom I mentioned yesterday, have been really happy this week to learn that Callie seems to understand French now. Walt was out walking the dog and saw them. Callie was acting shy, and Walt told her: « Va dire bonjour ! » — "Go say hello !" And Callie did. 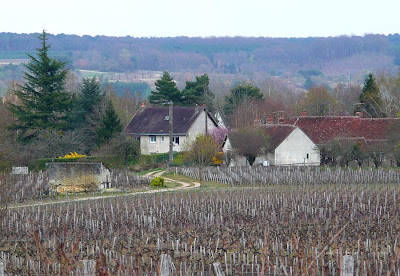 There are three houses in this picture. The one on the right
is the oldest, and ours, on the left, is by far the newest.
In the back you can see the highlands across the river valley.
The same thing happened when I went out with Callie day before yesterday. Again, she obeyed when I said « Va dire bonjour ! ». Chantal and Jean-Noël laughed in amazement and said it was a good thing that Callie can understand some French now. Everybody here things it's hilarious that the dog "speak" English. 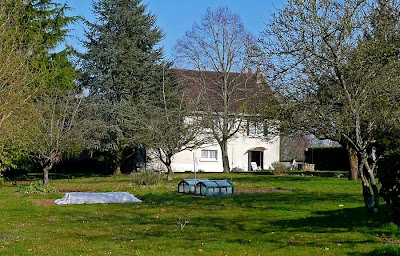 This is the back of the house, the west side, from just outside
the yard. You can see our garden tunnels and cold frames
(mini-serres) in the vegetable garden. We've planted
radishes and mustard greens so far.
I told them that Callie is only 2 years old, after all. And French is a hard language to learn. She's making good progress, considering that she's a British dog, a border collie. Her parents were named Ruby and Vince, and I don't know if French was their native language, or English. Silly, isn't it? But Callie makes for a good conversation piece. 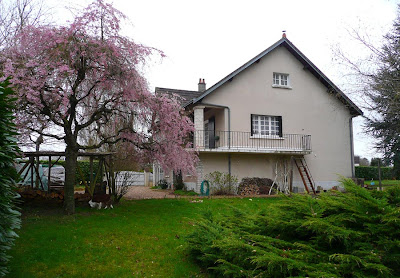 Here's the north side of the house from out in the side yard.
The weather continues to be nice and dry. We've had hardly any rain since mid-February. If it stays warm like this in April, we might have bumper crops of cherries and plums again, the way we did in 2007. Here's hoping...
Posted by Ken Broadhurst at 09:04