Loving where you live

Sylvie just came by to deliver today's baguette ordinaire, and I realized I had been sitting here thinking about California all morning. I lived there for 18 years and never quite got used to it. I didn't actively dislike it every day — au contraire — but California never lived up to my expectations.

What did I expect when I went there? The idea of moving from Washington DC to San Francisco didn't even appeal to me at first. But San Francisco was on the edge of wine country, so it had that in common with a lot of France. I thought I might end up working in the wine business. But I ended up in the software industry instead. 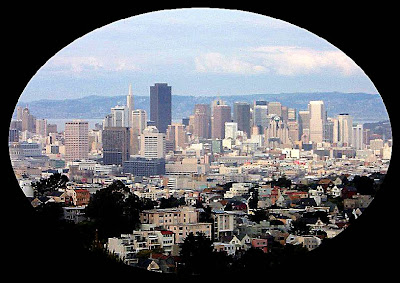 San Francisco in 1999 — one of several old photos
that I'm posting today
People said the California cuisine was good. There had been significant immigration to the West Coast from France (and Italy). In my mind, I came to believe that San Francisco would be much more like Paris, where I had been happy for eight years in the 1970s and early 1980s, than Washington DC had turned out to be. 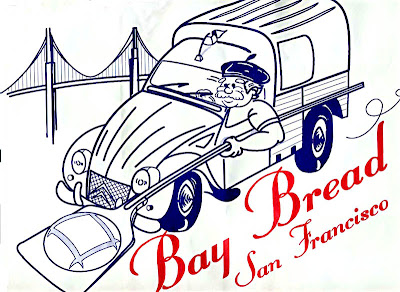 No, this boulanger didn't deliver, but he did have an old 2CV.
I moved to Washington DC in 1982 when I decided I needed to leave Paris and go have a "real"career in America. You know, retirement funds and all that. After many years of thinking that I would enjoy living in "the international city" that was the U.S. capital, I realized after two or three years there that I didn't want to stay. 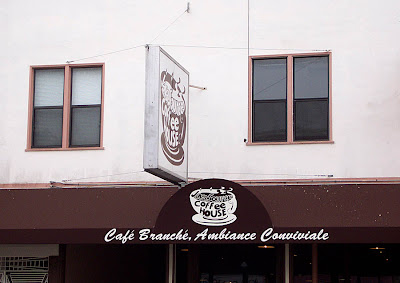 San Francisco had a French veneer... 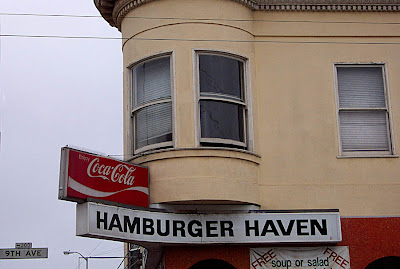 ...over a very American structure.
I had a great Washington job thanks to CHM. We were a good team as translators, with complementary skills. I worked in a French environment. I had opportunities to travel all over the U.S. and to Africa and Switzerland, to observe important people in action, and to see the inner workings of the U.S. government. I had never dreamed I would have such a life. But, of course, those were the Reagan years. The Washington environment — the prevailing mindset — wasn't exactly the same as mine back then. 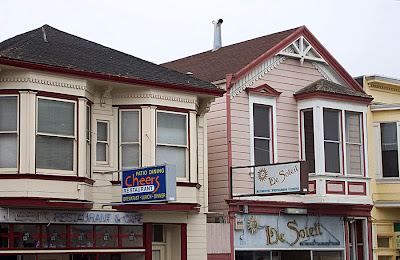 Le Soleil, not French but Vietnamese, in S.F.
In 1985 Walt and I went to San Francisco for the first time. He wanted to move out there. When I got there, I saw everything French — restaurants especially. Cafés. French on signs. The streets downtown were narrow compared to streets in Washington, Chicago, or New York. The City, as they say out there, was definitely compact and urban, like Paris. Bustling. Confident. Self-important, even. 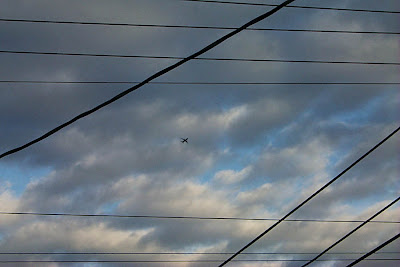 Seen from our front windows in San Francisco.
I figured the plane was probably going to France.
Why wasn't I on it?
I went to Fisherman's Wharf. There I smelled the ocean. Salt air. Low tide. Mud. Fish. For a minute, I felt like I was back on the coast of North Carolina. A hint of France — good food and wine, varied fresh produce, fine restaurants — with the smell of coastal North Carolina in the air. What was not to like? Somehow I felt I had been transported back in time by 10 or even 25 years. There was a definite familiarity about it all. 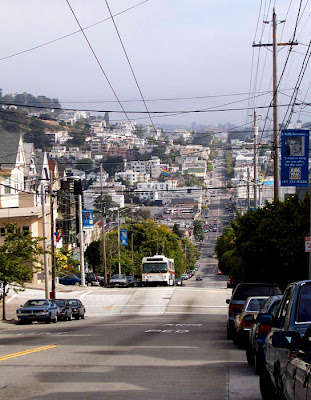 The streets of San Francisco (not downtown)
We moved out in 1986. I would have forged a special bond with other recent immigrants to California, except there were all immigrants. It was hard to find a native Californian. There was nobody to blame the nature of the place on but ourselves. Besides, we all spoke the same language, just with slightly different accents. There was really nobody to complain to or commiserate with because, after all, we had all chosen to pull up stakes and move our lives to California (swimming pools, movie stars...). 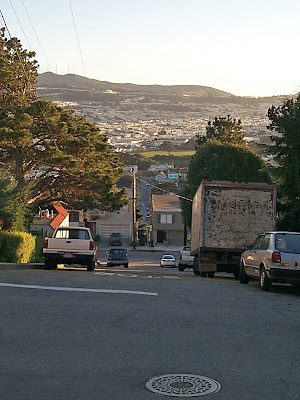 This street was near our house. Quite steep.
If you did find a native Californian, he or she just looked at you like you were crazy if you weren't ecstatic about living in paradise. The natives knew it was paradise because all these refugees from Back East — not to mention Mexico, Central America, and many Asian countries — kept streaming in. And most of the immigrants thought it was paradise too. Despite the lousy weather (at least in S.F.) and the earthquakes. If you didn't agree, there was something obviously wrong with you.

Well, they paved paradise and put up a parking lot, as Joni Mitchell sang. And miles and miles of... freeways. Not to mention suburbs. I'm just not a suburban kind of person. I didn't want to live just anywhere in the Bay Area — I wanted to live in The City if I was going to stay in California. 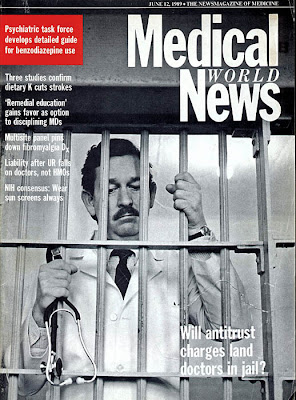 That's me, and no, I wasn't a doctor and I wasn't really in jail.
I was at Alcatrez doing a modeling gig. It's a long story.
Besides the commuting and the traffic jams, which I couldn't seem to escape because my work ended up being in Silicon Valley, what I didn't like about San Francisco was, fundamentally, that it wasn't Paris, and what I didn't like about California was that it wasn't France. It wasn't California's fault. I have come to understand that it was my attitude that was bad. I enjoyed so many days, so many people, so many jobs, and and so many leisure-time activities out there... but I was never able to just let go and feel comfortable. I think I was afraid I might never escape if I did. 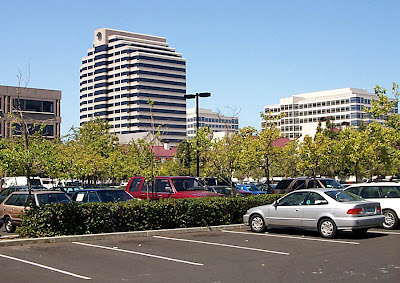 This was my California most of the time:
parking lots and office buildings.
It didn't help that I didn't really like my work. It wasn't work I had ever imagined doing. It was exciting to work for well-known software companies, to learn how to use computers — which I couldn't live without now — but the work never thrilled me. I enjoyed the people I worked with and admired the good work they did. The work in Washington had been much more interesting.

For many reasons, it took me 18 years to figure out how to make the big move. And in the end, leaving was Walt's idea, in fact, or at least the timing was. It's just not that easy to just pick up and quit a place. You have furniture, maybe property — all the material possessions that you accumulate over 20 years. A car. A dog. And you have a professional network — not to mention good friends. 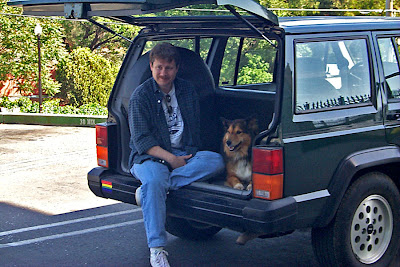 Walt in his Jeep with Collette in 1999
I never really told anybody besides Walt that I didn't like California very much. Or at least I don't think I did. Somebody like Cheryl, Ginny, or Susie might contradict me. Walt loved San Francisco, I know. But he's a much more positive person than I am, in many ways. Now he says he loves the life in Saint-Aignan too. He's been back to California, but I haven't, since leaving there exactly six years ago.

So here we are in France. What a relief! Six years and counting. I don't foresee another big move in my future.
Posted by Ken Broadhurst at 10:29