One thing you can say about MétéoFrance: when it starts predicting rain, you can count on it being consistent. Again today, they say, rain, rain, rain over the whole western half of France (and showers over the eastern half). We expect rain this afternoon.

Even though it never did rain yesterday. In fact, late in the afternoon the sun came out and I sat outdoors for more than an hour, throwing the ball to Callie. Walt taught her to bring the ball back the other day by giving her a treat each time she did it. It took less than an hour for her to get the idea. So now it's more fun for all of us. 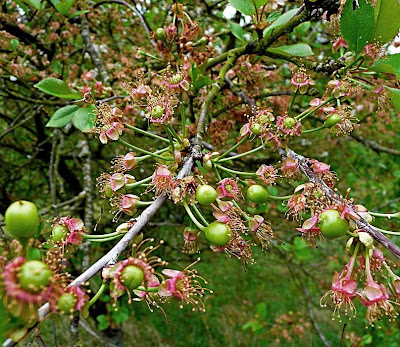 These are cherries. I remain optimistic
about their prospects, despite the weather.
It's hard to keep your spirits up when the weather turns on you. It takes just a few days to get used to bright sunshine and warm temperatures. The funny thing about French weather, at least in the northern half of the country, is that from April to October, as soon as the sun comes out, it feels warm and pleasant. As soon as a cloud covers the sun, you feel a chill. 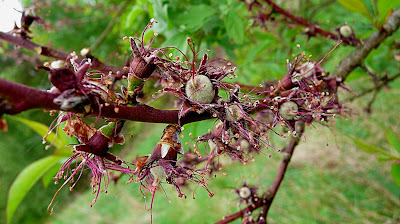 Peaches
Actually, the same thing was true in San Francisco, and even down in Silicon Valley when we lived there. As soon as the sun goes away — at dusk, for example — there's a chill in the air. Even on the hottest afternoons in Silicon Valley, you'd have to move indoors by the time the sun set because it was too cold to enjoy sitting outdoors, and there was nearly always a chilly breeze. San Francisco was worse, because summertime fog is a daily occurrence. It was nearly always cold in San Francisco, in other words, and the heat stayed on year-round. 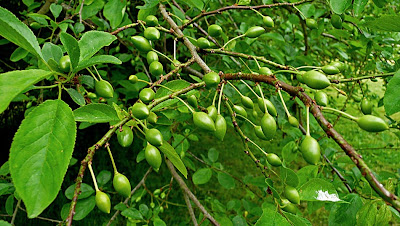 Plums
Happy here, though, that I am. Happier than I would be in other places I've lived, I think. We have a beautiful place to live, with privacy, wide open spaces, and room enough for a nice garden. It's quiet. People don't meddle in your private life. The scenery is beautiful, the food is great, and the neighbors are friendly and accommodating. We don't have so many close friends — it's harder and harder to find close friends when you get to be 50 or 60 years old. Other people have their own lives, and so do we. Most of our neighbors are older than we are and have their own extended families to occupy their time and energy. 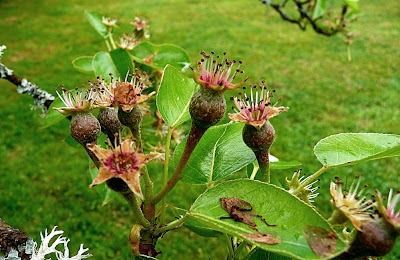 Pears
I read several expatriate blogs. Most of them are written by Americans who are living in France. Some of them take on a fairly negative tone when it comes to what it's like to be a foreigner here. People miss American food, friends, weather, and culture terribly. They can't say something good about the American things they love without turning it into a string of negative comments about the near-equivalent in France. They can't stop comparing... or complaining.

Some call French people "the Frenchies." They fall into stereotyping, as if all French people were the same. They judge the entire population on the basis of the few people they interact with or observe. That's a recipe for failure when it comes to feeling like you are a part of the culture and society around you, and finding happiness here. When you say "the Frenchies," you are implicitly setting yourself apart and you are expressing a negative, dismissive judgment of all these people who, in your mind, aren't "like us." And there's just a short distance between "not like us" and "not as good as we are." 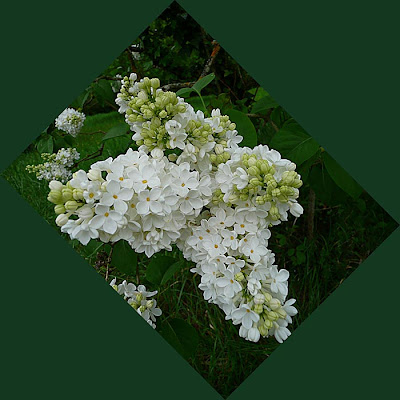 Local lilacs
I think I understood long ago that France is an entire world in itself, and, as they say, « il faut de tout pour faire un monde » — it takes all kinds to make a world. You have to keep reminding yourself of that reality. Gross generalizations about "Frenchie" behavior, appearance, attitudes, manners, habits, or intelligence are just that — generalizations. Abstractions. You have to take each person you meet as an individual, whatever the person's nationality or background. 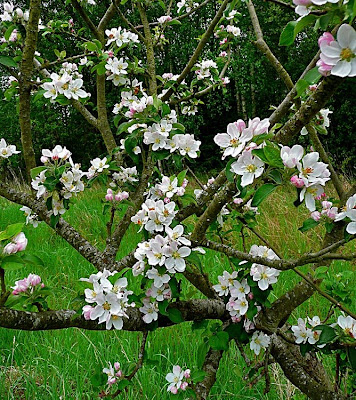 Apple blossoms
Often I feel like the negative feelings that expatriates develop about the surrounding culture and population have very deep roots in the individual expatriate's psyche. Somebody once told me that people often seek in vain to find geographical causes or solutions to their psychological problems. I wonder if these unhappy expatriates would actually be happier if they returned to America (or England, or wherever). I'm sure they would miss France. But you have to wonder why they stay here. I know, life is complicated and you don't always feel like the option of going back home is the best one. Sometimes it isn' t even a possibility. 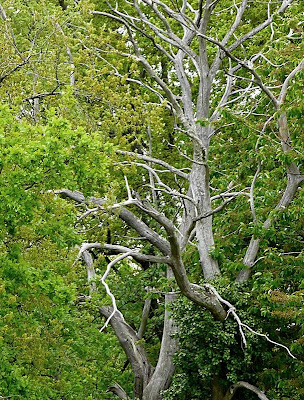 A big tree in the woods out back
I guess too that commenting, even negatively, on the stereotypical French person, situation, or way of doing things has a certain entertainment value — or at least the blogger thinks it does. There's a fine line between, on the one hand, astute observation and analysis of the society and individuals around you and, on the other, setting yourself up as a perpetual outsider examining every detail and foible you observe with a critical, even cynical, eye.
Posted by Ken Broadhurst at 07:44