Yesterday Walt made our "traditional" springtime asparagus and ham pie. It's a recipe he came up with two or three years ago, and we have it every April (and May and June). It's cooked asparagus spears wrapped in slices of ham (jambon de Paris or jambon blanc, they call it) and then baked in a pie shell with a layer of egg and cheese custard. 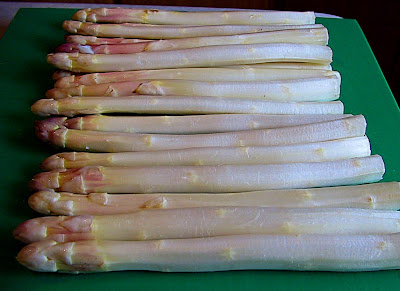 White asparagus peeled and ready to cook in simmering water
The original idea came from a recipe we saw on a CuisineTV show called Fiches Cuisine, hosted by Carinne Teyssandier. Here's a link to that recipe. Teyssandier used Parma ham (a.k.a proscuitto or jambon de Parme) but we tried that once and it was too salty for our taste. So we substituted the Paris-style ham (probably what we call Danish ham in the U.S. would be the same). Use what you like. 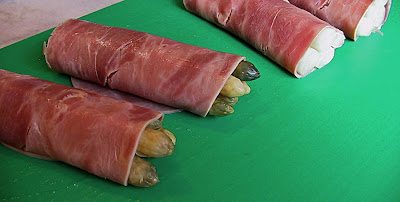 Bundles of cooked asparagus spears wrapped in ham
And use green or white asparagus spears. The custard is 2 eggs, half a cup of cream, half a cup of milk, and 2 oz. of grated parmesan cheese blended together and seasoned with salt, pepper, and nutmeg. A green salad dressed with vinaigrette is all you need to make this into a nice lunch for four people. And maybe an appetizer like radishes with butter and salt, some cheese after the pie, and a dessert! Need I mention bread and wine? 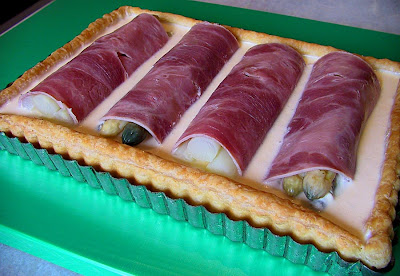 The wrapped asparagus bundles in custard (not yet cooked)
poured into a pre-baked pie shell
If you've been reading this blog for a while, you've seen this tart a couple of times now, including here. And here is a link to Walt's recipe with pictures from back in 2007. If you like asparagus, try this. If you don't eat ham, wrap the spears in thin slices of chicken or turkey breast — maybe smoked chicken or turkey. That would be just as good (we've done it). Or you could use no meat at all — just tie up the bundles of cooked asparagus spears with string and cook them the same way. Sprinkle some extra grated cheese on top before baking. 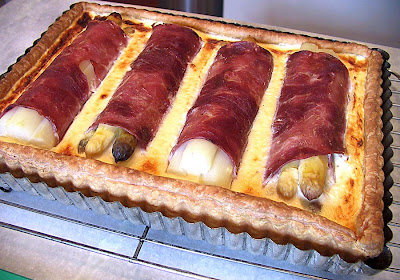 And the Asparagus and Ham Tart as it comes out of the oven
Carinne Teyssandier has a new show on CuisineTV now called Aujourd'hui je cuisine and it just came on the TV here in my "office." She and her co-host, Eric Léautey, are making white asparagus in a radish vinaigrette, green asparagus pan-roasted in the oven and served with shavings of parmesan cheese, and a cream soup made with the trimmings of the asparagus used in the other two recipes. There are a lot of idea for good asparagus meals. 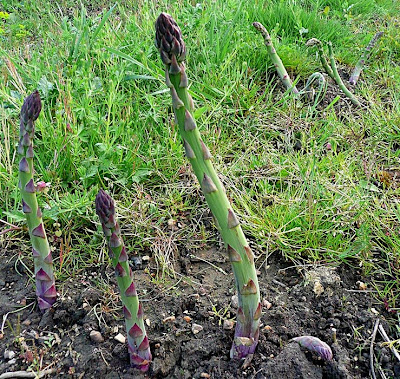