Thanks to all who commented on my wireless adapter problem. The computer is a Compaq F500 laptop that I bought in late 2007 for a really good price (at Circuit City — R.I.P.). It came with Windows Vista, but I ditched that dog (can you "ditch a dog"?) a while back. Now I'm running XP Home Edition — or should I say Edition Familiale? — in French. It's a long story.

Susie, that thread on the HP support forum was especially interesting. The posts go back to 2007. Before reading it, I had stumbled onto a kind of solution to the problem, and one of the posts describes what I did. I rebooted into Safe Mode. When I again rebooted, using Selective Startup using the "Modified BOOT.INI" rather than the "Original BOOT.INI" option, the idiot light on the built-in wireless adapter changed from orange (not working) to blue (working!). 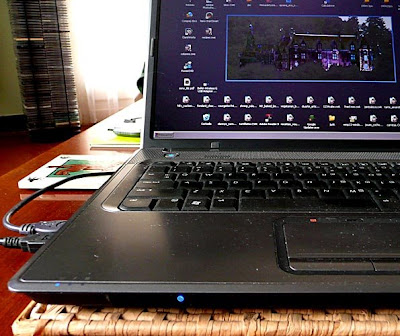 In this case, the blue light means "Go"...
The wireless adapter light had been orange for months, until about a week ago, when it turned blue all by itself. That's when I realized that it might not a hardware problem. I had been capturing video and making DVDs for a few hours. After all that work, the computer seemed sluggish. I rebooted. The blue light came on and the new hardware wizard popped up on the screen. The wireless adapter re-installed itself. 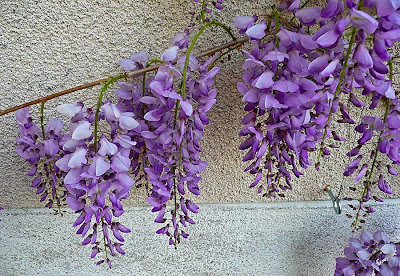 The wisteria we planted a couple of years ago is doing well.
This morning, after all the fiddling I did yesterday, when I restarted the computer the built-in wireless adapter was still working. This is my secondary computer we are talking about, not the one I use for writing blog posts or any other serious (?) work. The laptop sits on the coffee table in the living room and it's the one I use to look up recipes or information about people, history, language, and anything else I might hear on TV or the radio and have a desire to know more about.

When I thought that the wireless adapter problem was a hardware issue, I just gave up. I chatted one day back in January or February with an HP support representative. He told me the only thing to do was send them the computer so they could replace the motherboard. HP would send me a postage-paid FedEx box so both shipping and the repair would be free to me. Until I told him I happened to be in France... 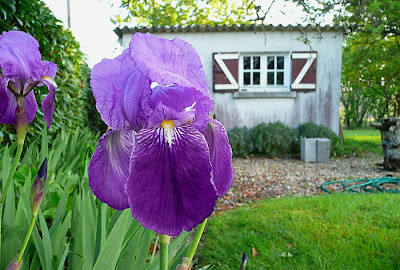 Irises have started flowering...
Meanwhile, I had bought a Belkin USB wireless adapter to use in the place of the unrecognized, defective, uncooperative Broadcom adapter built into the laptop. The Belkin adapter worked just fine (we have our two desktop computers on USB wireless adapters now too) but it took up a USB port on the laptop, which has only three USB ports, one of which is for the mouse. That left just one for other devices, including my flash card readers and the USB video capture device. 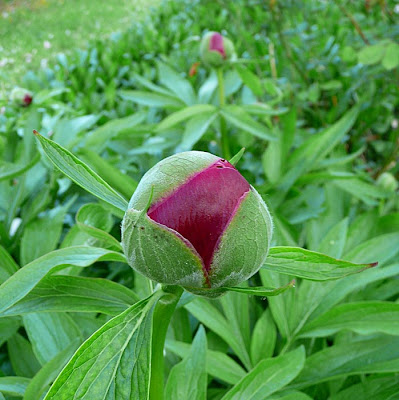 ...and the peonies are not far behind.
All of this just reinforces my realization that this rural life we lead, with few neighbors that we don't see very often and few good friends who live nearby — I'm not complaining, we love it — would not be possible without computers and the Internet for e-mailing, web-surfing, forum trolling... and blogging.

I'm a codger now so I can tell you what it was like 35 or 40 years ago when I lived in France. I always lived in cities — mostly Paris, but also Rouen in Normandy, Metz in the Lorraine region, and Grenoble and Aix-en-Provence for short times. Why, we didn't even have computers back then! Can you imagine? 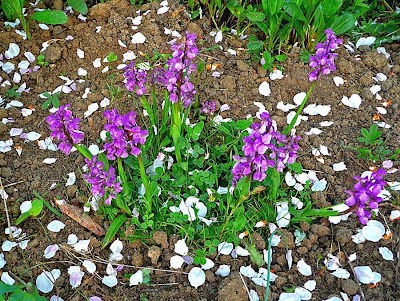 The wild orchids that I rescued from the mower, and
Walt planted in a protected spot, are flowering like crazy.
Hell, we didn't have telephones. Cell phones didn't exist, and there was a two-year wait to get a land-line phone installed, even in Paris. I always had several good American friends in those cities when I lived there, and I don't know how we managed to stay in touch with each other. Nobody had a phone. We just had to meet up somewhere, or drop by hoping the other person would be at home when we got there.

The isolation back then was kind of exciting. You couldn't call friends and family in the U.S. because you couldn't afford the long-distance charges. And nobody could call you because you didn't have a telephone. So what did you do? You wrote letters. I've got several boxes full of old letters that friends and family wrote to me, and I've got all the letters I ever wrote to my parents back then, because my mother saved them all for me. 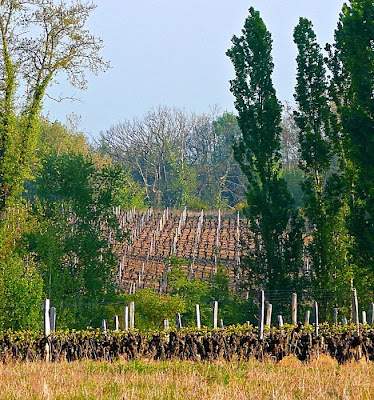 Nearby vineyards
It's easy to get nostalgic about all the time we devoted to letter-writing, about aerograms and beautiful postage stamps, about the excitement when you found a letter in your mailbox. But e-mail is better, let me tell you. And now we can devote our time not to a limited-distribution, hand-written letter but to blog posts for all the world to enjoy. We hope.
Posted by Ken Broadhurst at 08:11