"The house stinks." That's what Walt said yesterday afternoon when he came back from walking the dog out in the vineyard.

"Well, yeah, I'm cooking collard greens," I told him. I had told him I was going to. "That's what they smell like when the first start cooking." It's a smell I don't mind. I grew up with it. 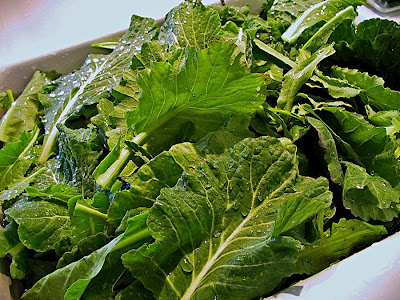 Collard greens
A couple of years ago I was at home in North Carolina and I called the mother of an old high-school friend to see if I could stop by for a visit. "Well, I'm cooking a pot of collards, but if you don't mind the smell, come on over," she said. So I did, and I don't remember even noticing the smell.

The fact is, collard greens, fully cooked, taste a lot better than they smell when you first put them on to cook. Today, I cooked a batch with a big chunk of poitrine fumée, smoked pork belly, that I bought from Mme Doudouille at the outdoor market in Saint-Aignan last Saturday. 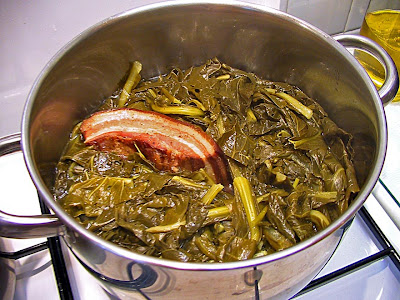 A pot of greens cooking on the stove
Where did the collard greens come from? I grew them. And no, you can't find them in France otherwise. These are plants that I planted last October. They survived a cold winter. Then in March, they started bolting — going to seed. I waited a few weeks to see if they would grow more, if the leaves would get bigger, with the coming of warmer weather. But they didn't. Here's a link to a picture of the puny little collard patch I had.

Yesterday morning I decided the time had come. I pulled the dozen or so plants out of the ground and cut off the woody root section with pruning shears. Into the compost pile went the roots. I put the stalks and leaves in a bucket and took them to the laundry sink in our utility room. There I ran a sink full of water and let the plants soak for a few hours. That loosens up any dirt stuck to the leaves. 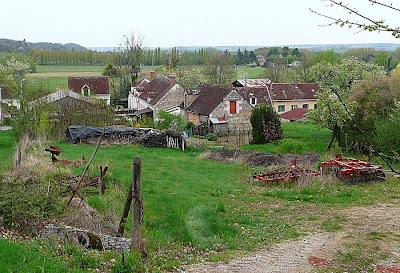 The hamlet just 1 km NW of ours is Les Bas-Bonneaux.
The grape-growing, wine-making Guerriers live there.
The afternoon was nice, so we sat outside and enjoyed the sun. After having mowed most of the yard (that was Walt) and tilled up another garden plot with the rotary cultivator (that was me), we deserved a relaxing afternoon. We worked hard in the morning. 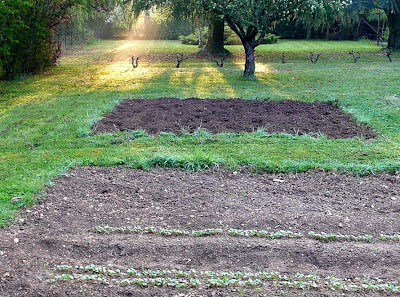 Yard mowed, garden plot tilled (sunrise view)
We had gone into high gear yesterday because for days and days MétéoFrance kept predicting rain in Saint-Aignan. So we bided our time. It never did rain, except last Saturday. Sunday morning skies looked threatening, so we didn't go out to start any big projects in the garden. 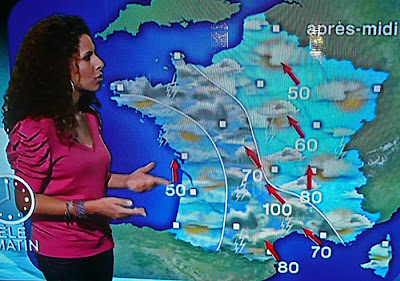 Today's weather — Saint-Aignan is in the band of rain and
storms. The numbers are wind velocities in km.
Then Sunday afternoon the sun came out and it was very pleasant outside. But the village has noise-restriction ordinances — no power tools allowed on Sunday afternoons. That gave us a good excuse to relax some more. On Monday, exactly the same thing happened. Gray morning, partly cloudy afternoon. And because it was Easter Monday, the same noise restrictions were in effect. More relaxing for us.

Yesterday just light scattered showers were predicted. We decided we'd better take our chances. I harvested the greens and tilled up a plot. Walt picked up sticks all around the yard and mowed two-thirds of it. The prediction for today is a decent morning and then "sustained" rains and maybe even thunderstorms in the afternoon. So we needed to get things like mowing and tilling done yesterday, while we could. 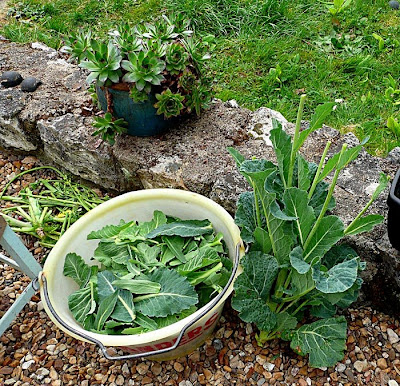 Pulling the leaves off collard plants
In the afternoon, while we sat outside, I pulled the leaves off all the collard plants. I was surprised at the amount I got. It must have been about 2 pecks. If you don't know what a peck is, let me tell you. It's one-fourth of a bushel. And that means it's about nine liters, if that means anything to you. Two pecks = 18 liters. Take my word for it, it's more than I thought I would get from my little collard patch. Maybe you can judge from the pictures. 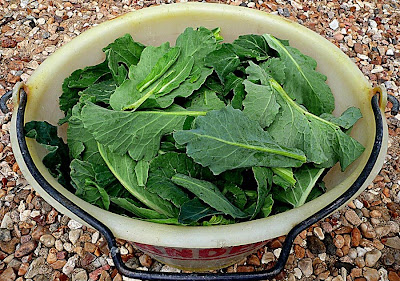 Here's the take
My mother told me on Sunday that she was eating some more of those prison-farm collards that we enjoyed back in February when I was back in N.C. on a visit. I haven't tasted my own collard greens yet. I hope they are as tasty as those "incarceration collards" (here's a link to that topic).

People in Saint-Aignan don't have collard patches, but they grow Swiss chard. We've been served chard by friends and neighbors here. And a lot of people have cabbage patches in their gardens. They grow not only cabbage but also a lot brussels sprouts. Collards, cabbages, and sprouts are plants that survive cold weather, so they give you something fresh and green to eat in winter.

One other good thing happened yesterday morning: I discovered a lot more asparagus growing out back, just outside our yard. First, I noticed wild asparagus growing on a patch of ground that was, last year, a big blackberry bramble, until a crew from Electricité de France came in with some major equipment and cut it all down, along with a lot of small trees. All that vegetation was growing directly under the power lines that feed electricity into our hamlet (9 houses). 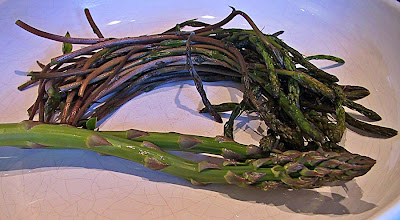 Wild asparagus and the garden variety
that I gathered just outside our yard
You'll see from the pictures how much wild asparagus I was able to gather. The stalks are very thin and fine. I haven't eaten any yet so I don't know what the taste is like. Recipes I've found on the web say to cook them and then eat them cold, with vinaigrette, or hot, in an omlet or scrambled eggs.

After finding the wild asparagus, I walked over to the patch of ground that until last year had been covered by a huge compost pile, until the mayor (our neighbor) sent a crew in and haul it all away. She also had a sign put up to warn people that they could be fined for dumping anything on that patch of land.

We've been dumping wildflower seeds on that plot of ground this spring. I hope we don't get arrested. No flowers have come up yet. 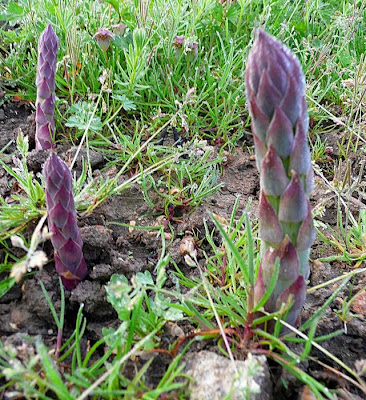 Asparagus coming up out back where the big compost pile used to be
And what did I find there yesterday? More asparagus — the garden variety. I picked only two stalks, which were ready, but I noticed another dozen or more that are pushing up out of the ground now and might be ready to harvest in day or two. You can bet I will keep my eye on them and cut them as soon as I think they are just right.

Susan of Days on the Claise calls this kind of wildcat harvesting "vergetarianism" — it means foraging for food on the verge of the road. I might call it "edgetarianism" — gathering wild plants around the edge of our property, including asparagus, plums, and cherries (he says, ever the optimist).
Posted by Ken Broadhurst at 08:54