Yes, those flowers I teased you all with in yesterday's post were blossoms on an old pear tree. They also resemble the flowers on our plum trees. The apple trees here haven't bloomed yet, but they are getting ready to. A lot of trees out around the vineyard are sporting white flowers these days, but I don't know how many of them will actually bear fruit of some kind. I plan to keep my eye on certain ones to see.

Today's flowers are ones nobody who has a lawn will have a hard time identifying. They are called pissenlits in French, and yes, that means what it looks like it means. It means "pee in the bed." Pissenlits can also be called dents-de-lion — "lion's teeth" — but I've almost never heard anybody use that name for them. 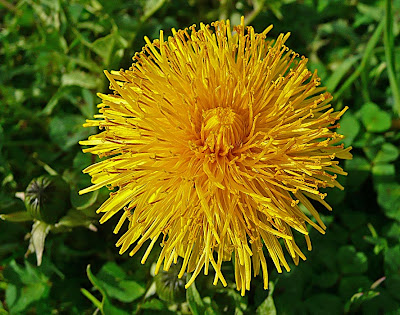 I always wondered why dandelions were called pissenlits in French. From a gardening show on TV the other day, I learned that the dandelion root can be used as a diuretic in homeopathic medicine. So this explains that, as we say in French — ceci explique cela. 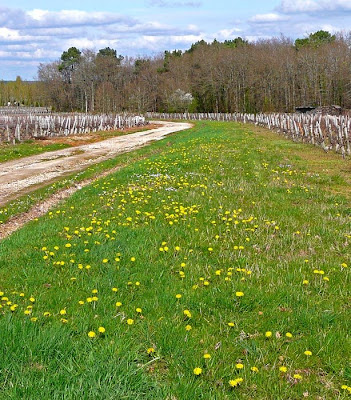 When I just looked up the word in the Robert dictionary, I learned a new expression. If you say about someone « il mange les pissenlits par la racine » — he's eating dandelion roots — it means he is « mort et enterré » — dead and buried. Compare our expression: He's pushing up daisies. 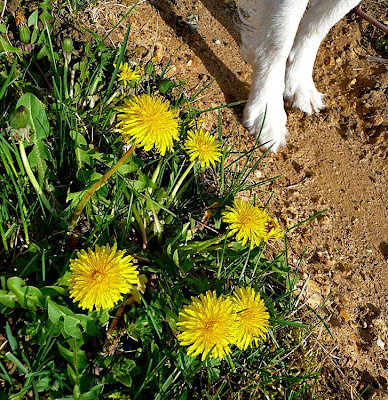 So you have to be careful about eating dandelion roots before you go to bed at night — not because you might die but because you don't want to wet the bed. But do you know that you can also eat dandelion leaves? Maybe everybody knows that by now. The woman who sold us our house here in Saint-Aignan said her husband used to gather fresh dandelion leaves early in the spring to eat them as a salad. 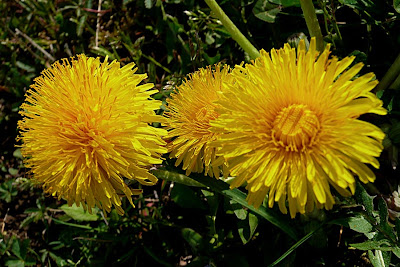 On that same gardening show I watched a few days ago, I learned that dandelion leaves are good to eat only before flowers appear on the plant. After the pissenlit flowers, the leaves get too tough. So it's obviously too late to pick any now. Maybe next year. It seems there are several species of dandelions, and some are better to eat than others. For me, it would be a question of trial and error. 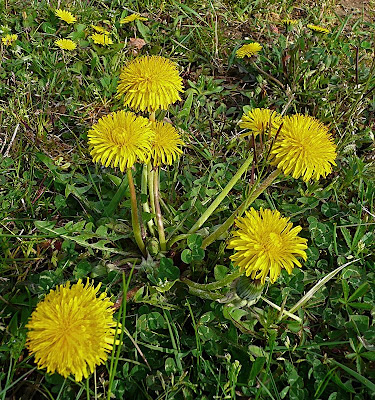 I think I remember seeing dandelion greens in the produce departments of supermarkets in California. Maybe it was only at Whole Foods. I can't remember ever eating them, but I might have.

The Larousse Gastronomique doesn't say much about dandelions except that they are edible. They must not be considered gastronomical. People mostly content themselves with picking wild ones in the meadows, the Larousse says, but some improved varieties are grown in gardens. Tender dandelion leaves are eaten raw, in salads. You can also cook them and serve them like spinach. 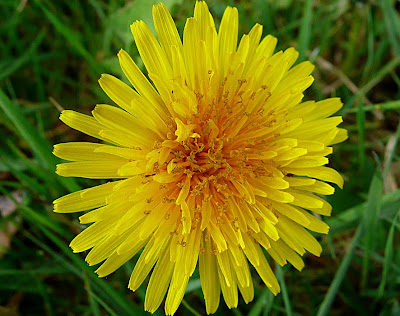 In her book Cuisine pour Toute l'Année, Monique Maine gives a recipe for Salade de Pissenlits aux Lardons: 8 oz. of dandelion leaves, 5 oz. of smoked pork lardons, one teaspoon of mustard, on tablespoon of vinegar, two tablespoons of oil, salt, and pepper. Make a vinaigrette of mustard, vinegar,oil, salt, and pepper in the bottom of a big salad bowl. Wash the dandelion leaves thoroughly and dry them. Fry up the lardons (or bacon). Put the dandelion greens and lardons in the salad bowl and toss with the vinaigrette. Serve immediately. 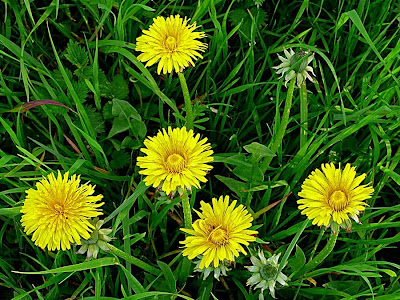 Dandelions here around Saint-Aignan don't seem to be the pest they are in American lawns. They flower in April and May, and then they appear to go dormant. Our yard and the neighbors' are not really lawns, anyway — they are described in France as prairies, which can be translated as "meadows." Whatever grows in or on them, grows. That includes cyclemen, primroses, violets, dandelions, grasses, clover, and a lot of other plants at different times of the year.

Back in the 1970s, one weekend my friend Cheryl and I drove from Champaign-Urbana over to the Amana Colony in Iowa. I think we boughta bottle of dandelion wine in a general store there. It was a traditional product made by the colony's residents. I don't remember if it was sweet or dry, but I bet it was sweet.
Posted by Ken Broadhurst at 08:48