Yesterday when Sylvie la boulangère drove up to sell us our daily baguette de pain, I was the one who went out to get it and pay her (still 81 cents). She looked at me closely — she hadn't seen me in about a week — and she said: « On dirait que vous êtes bronzé. » — you look like you have a tan.

« Ça n m'étonnerais pas — je passe mes après-midi au soleil depuis quelques jours, » I told her. I've been spending my afternoons outdoors in the sun. The weather has been that nice. My routine is to write a blog post in the morning, walk the dog (if it's my day), and then do some work in the kitchen until lunchtime. 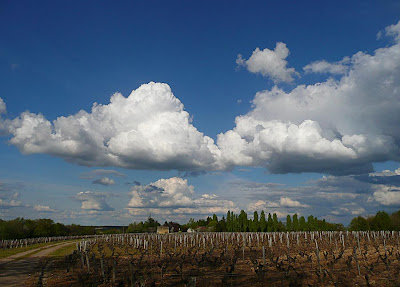 Work in the kitchen might be making lunch, or it might be preparing food I've bought for the freezer. Yesterday, for example, I had about 5 lbs. of bœuf pour bourguignon, stew beef, that I had bought at Intermarché Thursday morning. It was on sale, and I stock up when the price is right (3.50€/kg, or about $2.20/lb. in U.S. currency).

I give prices because I think it's interesting to be able to compare French prices with U.S. prices (or other countries'). If you're thinking of moving to France, this will give you an idea of the cost of living. And if you are retiring, you will find that prices and bargains matter more than ever. 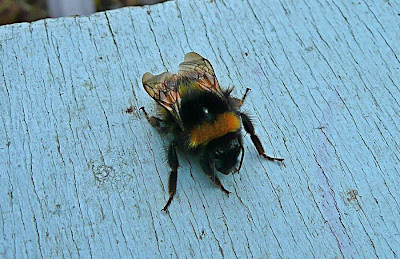 Before I freeze the beef, I trim it up to remove most of the fat and connective tissue. Walt and I eat the meat, either in stew or ground up to make meatballs, and Callie gets the scraps, which I cook to add to cooked rice or her kibbble. I'm retired, so I have time to fiddle with food a lot — that's why I can buy inexpensive meat and vegetables, for example, and do the long cooking required to make a good bœuf bourguignon, bœuf aux carottes, coq au vin, or blanquette de veau. 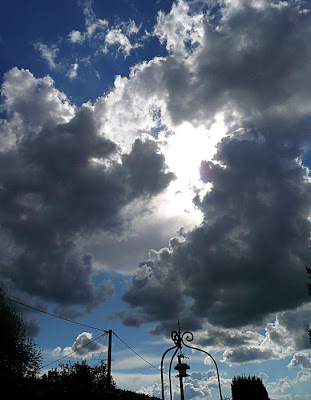 I had also bought four nice chicken leg-thigh sections because they were also on sale — 2.99€/kg, or about $1.85/lb. Those just need to be repackaged for freezing, so that we don't have to thaw them all at once. Then I started getting lunch ready.

Meanwhile, Walt got out the vacuum cleaner and sucked up all the dust and dog hair in the living room while he watched tennis on TV — he watches without needing to listen. The tournament going on TV right now is a clay-court event down in Monte Carlo. Roger Federer lost yesterday to a fellow Swiss player. 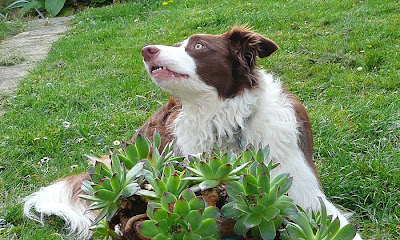 This is Callie keeping her eye on an inteloping bird...

Lunch yesterday was leftovers — more of that rabbit I cooked Easter Sunday, which made three meals for the two of us out of that. The rabbit cost about 9.00€, but we got our money's worth out of it. The leftovers were almost better than the dish was on the day I cooked it. Neither one of us minds eating leftovers for a few days after a big cooking project. I know some people who can't stand to eat the same thing two or three times in a row, but that's not us — as long as it's tasty. 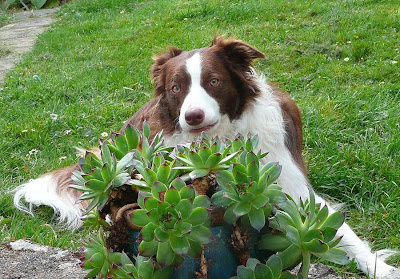 After lunch, I watched a Woody Allen movie on TV. We have a satellite system and a program package from French CanalSat (which is the only game in town since CanalSat bought out it only competitor, TPS). We get 6 or 8 movie channels, and a lot of them show English-language films in the original English version. They also show a lot of French movies, of course, and we watch many of those, along with a scattering of German, Spanish, Italian, Japanese, and Chinese films. 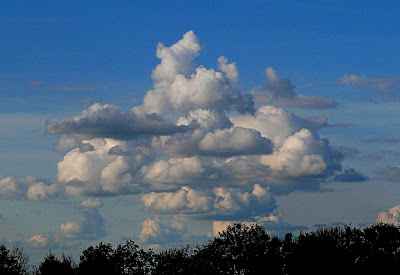 The makings for April showers

The films always have French subtitles if they are in a foreign language, and you usually have the option of watching them dubbed into French if you'd prefer. Only a few films are actually shown in V.O., which means version originale, with subtitles. Most are broadcast in V.M., version multilingue, which means you can choose the language soundtrack you want to hear. It's nice, and we don't see the point of watching American or British movies dubbed into French. The French movies don't have subtitles, but we're both past the point of needing those. 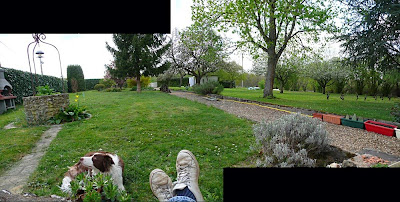 After the movie, at about 3:30, for the past week or two I've been relocating myself to the outdoors. There are usually some clouds but the sun pokes through often enough to keep the temperature at pleasant levels. And as a result of sitting outdoors or working in the garden most afternoons, I've gotten a tan. It's probably bad for my skin, but it feels good.

I have a lot of plants in pots that need re-potting this time of year, and that's a perfect activity for a nice afternoon out in the sun. Yesterday, I re-potted my grandmother's Sanseveria plants. My grandmother died in 1974, and I've had the plants since the early 1980s, when a cousin in North Carolina gave me some of them. There's no telling how long Grandmama had had them. Walt and I lived in Washington DC back then. I moved the plants to California with us in 1986 and they thrived out there for many years. 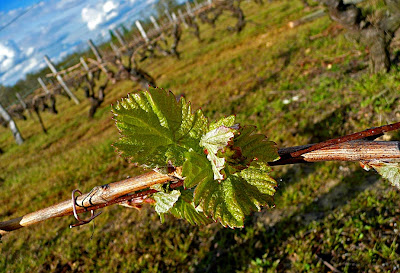 The grapevines are starting to get some leaves on them.

When I moved to France in 2003, I took most of the Sanseveria plants back to North Carolina and gave them back to my cousin. I had a planter-box full of them. She said all hers had died in an unexpected freeze one night. I didn't see how I could move any of the plants to France. But meanwhile, Walt and I stopped off to see CHM in southern California on our way to N.C., and I gave him a couple of cuttings from Grandmama's plants.

In 2004, CHM came to Saint-Aignan for a visit. And guess what he brought me — a cutting from my grandmother's plant. He wanted me to have it. I potted it up and it has done well. In 2005, I brought back another cutting from North Carolina — my mother had one of the plants I had brought back from California. One of the plants produced a baby a couple of years ago, so now I have three. 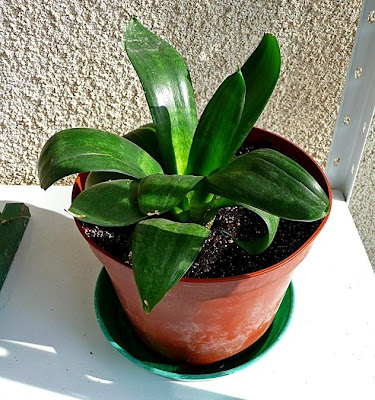 One of Grandmama's Sansevieria plants

Anyway, sitting outdoors reading and listening to the radio (my favorite radio program, a French talk/game show called Les Grosses Têtes, is on from 4:00 to 6:00 every afternoon), or puttering around with potted plants, is my idea of a rally nice way to spend an April afternoon. Every other day I walk Callie at 6:00, so that gives me some good exercise too, and a chance to take a lot of pictures.
Posted by Ken Broadhurst at 09:22