Tasting the wines, smelling the flowers

Yesterday we went over to Jean-Noël and Chantal Guerriers' place to taste and buy some wine. It's April now and wines of the 2008 vintage are just getting ready for tasting and bottling.

When we got there, Chantal came out and greeted us. She sent us up into the courtyard (more like a barnyard) of the house that Jean-Noël grew up in and where his 87-year-old father still lives. The older Mr Guerrier came out and greeted us to. Jean-Noël was in one of the outbuildings pumping wine into what we call "cubitainers" for another customer. 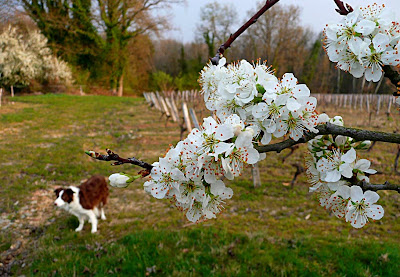 Callie in the vineyard under a plum tree
The wine was a 2008 Sauvignon Blanc, and Chantal soon brought a couple of glasses for us. Jean-Noël tasted it along with us. The glasses were small, but they were filled almost to the brim. J-N said the Sauvignon was ready to be put in bottles. We bought 10 liters — that's 13.33 bottles — which J-N pumped out of the vat into one of our plastic jugs.

The other customer paid for his wine and departed. The next two wines J-N wanted us to taste were in tanks under a shelter on the other side of the barnyard. "Walk this way," he said. By the way, there are chickens and a rooster in a pen in the barnyard, and there are even a pair of pheasants in a separate cage. We admired the colorful birds. It is definitely a rustic scene. 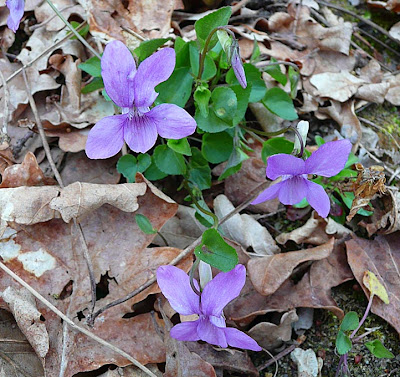 The next wine we tasted was a late-harvest Chenin Blanc. It's a dessert wine and would also be good with foie gras, for example, or as an apéritif. The much-drier Sauvignon Blanc would be good with oysters. The Chenin is not yet ready for bottling, but it's getting close. J-N said he wouldn't sell it in bulk, but only in bottles. I plan to buy some when it's ready.
The third wine was a rosé made from Pineau d'Aunis grapes, a local specialty. The rosé is very dry and has a definite peppery taste. It's not ready to be bottled yet either. 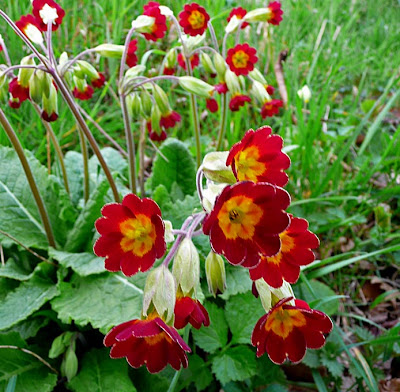 As we were tasting the rosé, ad car pulled up into the courtyard and two men got out. "It's a car from the 37, so it might be serious customers," Chantal said — the 37 département is the one just west of ours, and it's capital is Tours, the big city of the region.

The two men were indeed serious customers. One seemed to have his own wine business, and he was looking for new stock for his shop or shops. The other is in the charcuterie and goat cheese business, and he has a boutique where you can sample his products. To go with the sausages and cheeses, you of course also need a little glass of wine. 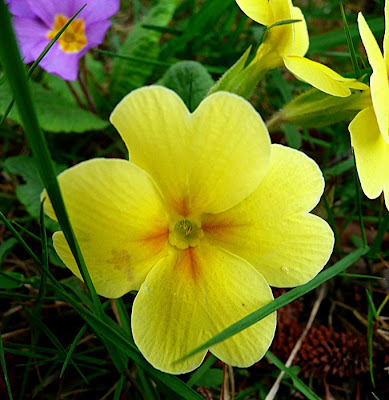 At this point, we moved on to the wine cellar, which is a vaulted room under the old house. All the walls are covered in black, powdery mold or fungus because of the evaporating wine and alcohol. There are bare light bulbs hanging on wires off the ceiling. There are quite a few bottles of wine on racks along the sides of the cave, there's bottling machine, and there are several big fiberglass vats full of various new wines.

The first one we tasted was a 2007 Côt. Known as Côt in the Loire Valley, this varietal is called Malbec in much of the rest of the wine world. It's the grape grown a lot in Argentina, and by the name of Auxerrois it's the grape grown in Cahors, in SW France, to make what has been called « vin noir », "black wine." Côt'/Malbec/Auxerrois makes a dark, luscious red wine. 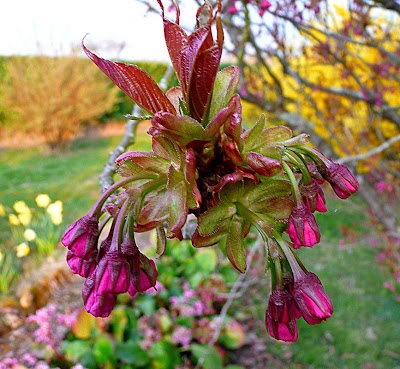 Walt and I had tasted the 2007 Côt last fall and bought some, so we knew we liked it. The two other customers (they were from small towns near Loches and we plan to visit their shops and tasting rooms the next time we get over that way) liked the 2007, but they weren't that enthusiastic. We then tasted the 2008 Côt, but it paled in comparison to the 2007. It's still a little too young.

One of them said what he really liked was a wine often called
« Tradition » around here, which is made from a blend or assemblage of three grapes: Côt, Cabernet Franc, and Gamay. Jean-Noël said the only assemblage he had on hand was a 2004 wine made with Côt and Cabernet Franc.

As I said, Côt is used to make the "black wine of Cahors, and Cabernet Franc is the grape used to make two of the Loire Valley's best known and most appreciated red wines, Chinon and Bourgueil. Both of these wine towns are on the other side of the city of Tours from us, to the west, and they sort of face each other across the Loire River. 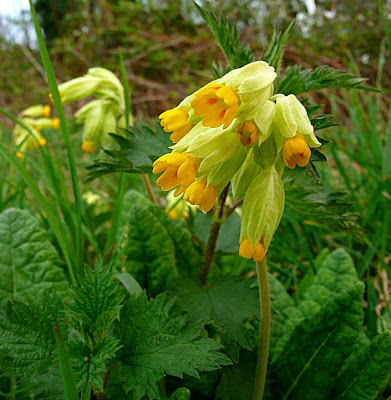 When we tasted the dark, dry 2004 assemblage, the man who buys and sells wine was obviously pleased and interested. A 2004 is a very old vintage for most Loire Valley wines. He immediately wanted to know how many bottles of this wine J-N still had to sell. He implied that he would buy the whole stock.

We went on to taste some Gamay, but the guys from Loches were not impressed. Walt and I really like Gamay, and we bought 10 liters of the 2008 Gamay along with 10 liters of the 2007 Côt. Gamay makes a very light, drinkable red wine that we like. A lot of people think it's too thin. They like the heavier, "structured" wines made with grapes like Côt and Cabernet. 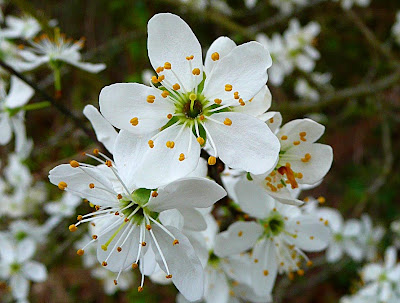 My impression is that if you like Gamay, that means you probably like all dry red wines. I know I do. Gamay is easy to drink, even when the weather is warm. It goes really well with foods of all kinds, to my taste. It complements and accompanies rather than overpowering the food. Gamay isn't the point — the food is — and Gamay's taste stays in the background, kind of the way a pretty blue sky highlights rather than dominates a nice landscape.

By the time we paid for our wine (30 liters, which is 40 bottles, for 40 euros!) we were slightly tipsy and past ready to eat lunch. Jean-Noël and his two new customers from Loches (it's ironic that that word is pronounced "lush" in French) were feeling no pain either. 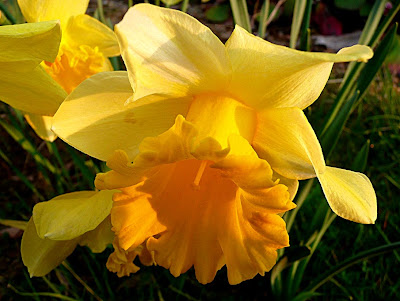 Walt and I just had about a mile to drive up the paved road into the vineyard and then a mile on the gravel road through the vines (the one where we walk Callie) to get home. We didn't pass a single other car along the way. So we lived to tell the story.

I didn't take any pictures during the wine tasting so I'm dressing up this post with some recent pictures of flowers.
Posted by Ken Broadhurst at 09:42