Yesterday afternoon was beautiful, and I went out for my walk with Callie at 5:30. She wanted to go around the north side of the vineyard so we did, despite the dangerous donkey that lives over there. I was taking pictures of flowers, bugs, and berries.

I noticed, as did Callie, that somebody was whistling and calling for a dog on the other side of the woods. There are half a dozen houses up there, on the other side of the donkey pen and a little wooded ravine, along the paved road. Then I looked up into the vineyard and saw a yellow dog watching me and Callie. Callie saw the dog too, but she stayed with me. 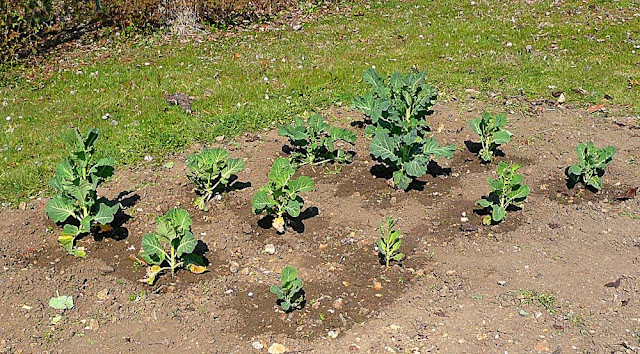 I have now weeded and watered my collard patch.

As we looped around the parcels of vines back up toward the gravel road, there was that dog watching us again. I thought at first that it was Max, a dog that belongs to one of the grape growers and spends time with him out there when the man pruning back his vines. But we were pretty far from that grower's parcels, and it wouldn't be like Max to stray so far. 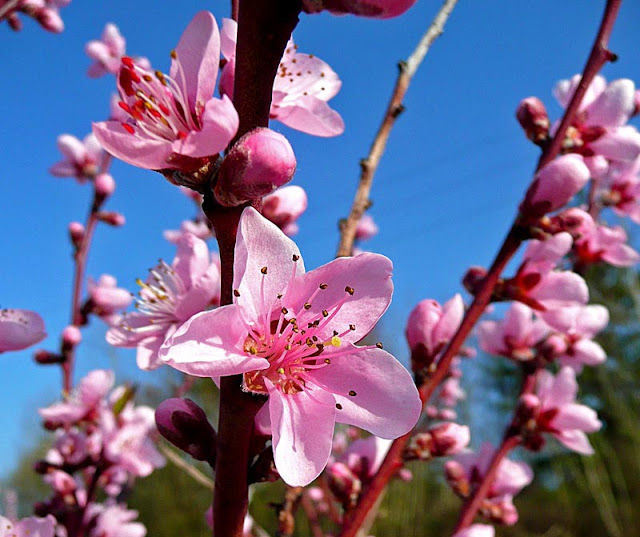 Cherry blossoms out on the edge of the vineyard

Then I realized it was Lili, and she was the dog being called. She's lives with a couple who moved to Saint-Aignan from Paris a few years back and whose house is up on the paved road. I wrote about Lili and the woman who walked with her back in December 2007 — here's a link to that topic. What I said then, in part, was that I didn't enjoy seeing Lili and That Woman — we ended up calling her La Dame à Lili, or The Lili Lady — because:


“Callie and Lili take off together and disappear from view for long minutes. I stand around calling Callie, but she doesn't come back. I'm afraid she'll end up out on the paved road, where The Woman and Lili live, and in front of a car. And when she finally does feel like coming back, she's a muddy, tangled mess. She has to have a full bath when we get home, and giving her a full bath every day is not my idea of Quality Time spent with her.

Besides, the woman who walks with Lili is so boring. We have nothing to say to each other, and we always end up standing around or walking together for a good part of the time I'm outdoors. That also is not my idea of Quality Time in the Vineyard. I'd rather be walking briskly, for the exercise, or taking pictures. Thinking my own thoughts. Keeping tabs on Callie's activities.”

So yesterday, there was Lili. It had been many months since I'd seen the dog, but I'd seen the woman in Saint-Aignan on market days a few times and, I thought, not all that long ago. We'd said Bonjour to each other a couple of times, but that was all. Even then, it had been a while since I'd seen her out in the vineyard walking her dog — well, she didn't actually walk with Lili. She just let the dog go running off and stood around waiting for it to come back to her. 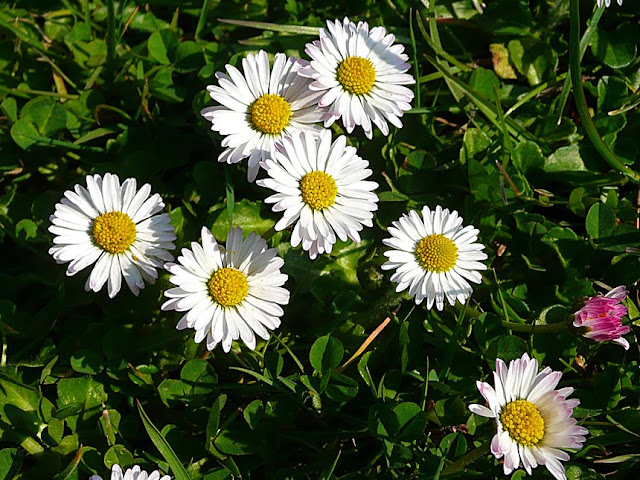 Les pâquerettes — English or "Easter" daisies —
are blooming all around now

Lili was friendlier yesterday than she had ever been before. I squatted down and called her. She came to me, hesitantly. She let me pat her on the head and rub her nose. She's part Labrador and part Greyhound, I think, a pretty dog, and fast. She's bigger than Callie, but not that much. She came from a shelter and had behavior problems at the beginning, La Dame à Lili had told me.

This time, Lili tried to get Callie to go running off with her, but Callie stayed with me. Lili ran ahead, toward some people who were working farther up, in a row of vines. It turned out to be the Guerriers, our neighbors who have about 15 acres planted in grapes and make very good wines, which they sell at low prices. I wanted to talk to them, so I headed that. Here's a link to earlier topics about the Guerriers and their wine business. 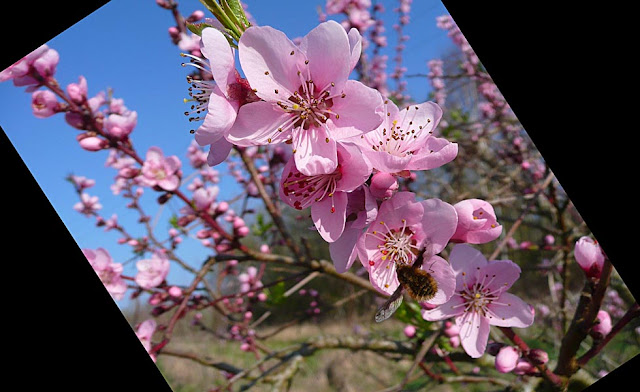 Cherry blossoms with an insect visitor

The Guerriers saw me and Callie coming and were worrried that Lili, who had joined them, might be aggressive towards Callie. "Oh, the two dogs know each other," Chantal Guerrier said. Yes, I told her, they've known each other for a couple of years. She could tell by the way they interacted with each other. There was no sign of La Dame à Lili.

Chantal started to say something about « la mère de Lili » — "Lili's mother" — but stopped herself because that sounded funny. That's when I told her that we called her La Dame à Lili, a name that one of the other grape grower's wives had come up with when I stumbled over finding the right phrase. That woman agreed that Lili was a problem dog. 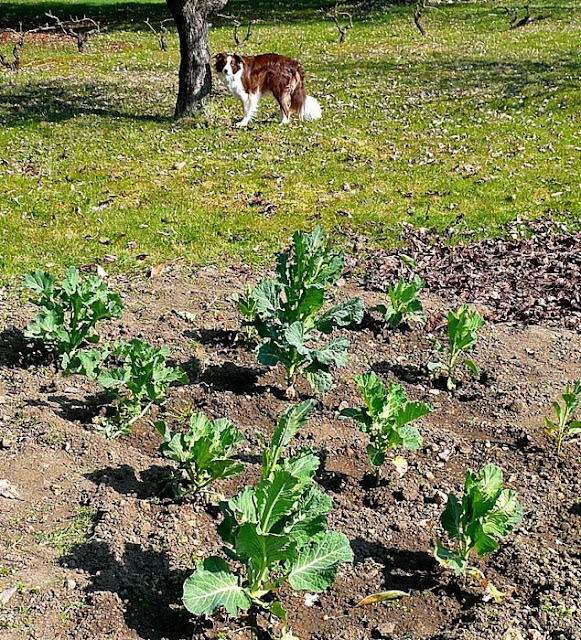 Callie in the back garden

Jean-Noël, Chantal's husband, said Lili had apparently run away from her owner while they were out for their afternoon walk, because they had heard Le Monsieur à Lili calling for her to come back home. You could see Lili's house out across the vines from where we were standing.

Last year it was usually La Dame à Lili who brought the dog out into the vineyard in the afternoon, and Le Monsieur who walked her in the morning, I told the Guerriers. But I haven't seen La Dame à Lili in quite a while, I said. 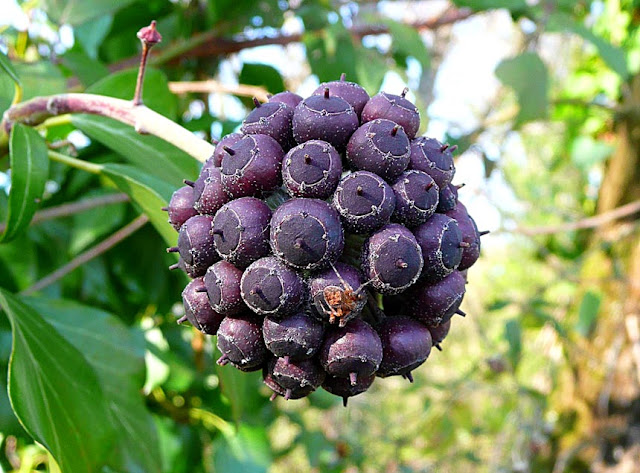 « C'est parce qu'elle est décédée, oh... en septembre », Chantal told me — that's because she passed away last September. I was stunned. She died? Yes, Chantal said, she died suddenly and unexpectedly. One morning her husband took Lili out for a walk. He left his wife sitting in an armchair watching the TéléMatin news on TV. When he got back from the walk 30 minutes later, his wife was still sitting in the same chair, but she had died. It was her heart.

La Dame à Lili was just 64 years old, the Guerriers told me. I of course feel bad about what I said about the poor woman in that post just over a year ago, but it was how I felt at the time. Le Monsieur à Lili has decided to stay in Saint-Aignan for now, even though he has grown children in the Paris area, where he and his wife lived until about three years ago.
Posted by Ken Broadhurst at 08:58