Compaq laptop: wireless off and on

I'm giving that nerdy title to this blog post because I'm hoping somebody might find it while doing a Google search and help me figure out what is going on. The built-in wireless adapter in a Compaq notebook computer that I bought in November 2007 suddenly stopped working in Nov. 2008.

The Broadcom wireless adapter just vanished from the computer's hardware list in the Windows Device Manager. There was no way to install new drivers for it because Windows didn't even "know" any more that the adapter was there. 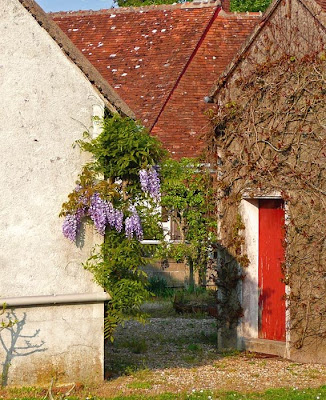 Wisteria in flower at the neighbors' place
Then suddenly one day last week, it came back. There's a light on the front of the laptop that indicates whether or not the wireless adapter is turned on. Orange is off, and blue is on. It was orange for five months. Suddenly it was blue again. And it worked fine.

It worked fine for maybe 4 hours. When I restarted the machine, it turned orange again. I wanted to give up on it. Now this morning I started the computer and the light came on blue again. How can I get it to stay blue? 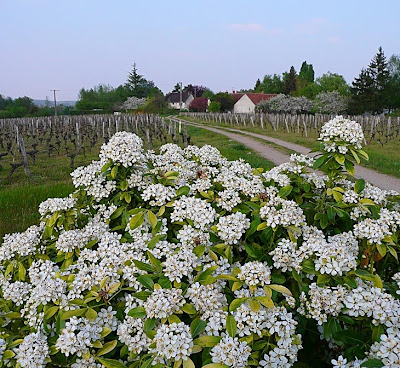 View of the Renaudière hamlet from the vineyard
The only thing I can figure out is that in November I also started using a Pinnacle Dazzle DVC100 video capture card on that computer. The capture card is a USB device. I am using it to capture movies off old VHS video tapes and the odd show or movie directly from the television. Or maybe the adapter's intermittent behavior is simply a bad connection inside the computer. 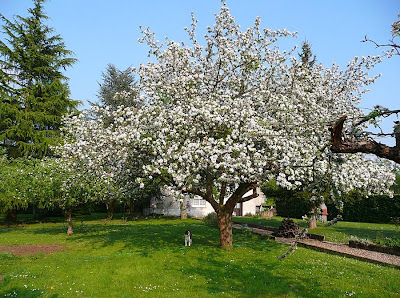 In 2009 we are going to get tons of apples from this big tree.
* * * *
Regarding horse manure: Thanks to Evelyn, Linda H., and Victoria for the comments yesterday. I wondered who would comment on a topic with that kind of title. Evelyn's father was a dedicated gardner until very late in life, so I wasn't surprised to see E.'s comment. I got the work done yesterday and successfully hosed and scraped all the mud off my boots.

Linda, yes, the SuperU supermarket has a gardening section and sells potting soil, fertilizers, and composted horse manure. Victoria, when you finish that patio, can we bring you over here to build one for us? Actually, the soil here is kind of like concrete, so just setting some bricks or stones in it might be sufficient, without much digging. 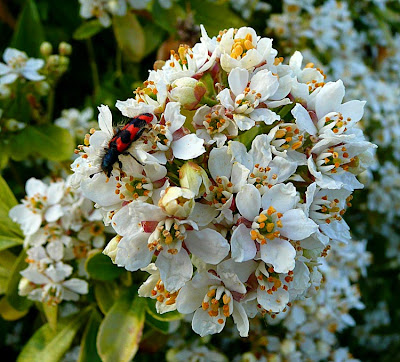 Flowers on an ornament orange,
with a black and red bug
All this beautiful weather we are having this week facilitates such tasks. Yesterday I was able to till up not one but 2½ garden plots. I'm sore this morning, but that's to be expected. In the afternoon, when I was out walking Callie, I saw our neighbor (the mayor's husband) out running his roto-tiller in their vegetable garden plot. Our other neighbor, Bernard, was out riding around on his mower. It's in the air right now. 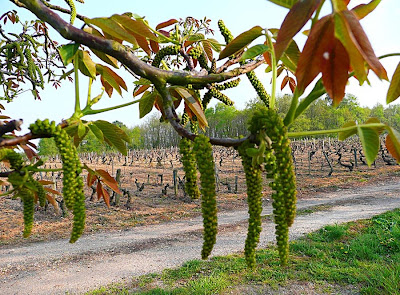 A walnut tree with tassels
I'm glad the bags of horse manure have a mode d'emploi printed on them. I followed the instructions on the package. It said to spread one kilogram of composted manure per square meter of surface area in the garden. It was a 20 kg bag and I have a 16 sq. meter plot, so I splurged and used the whole bag on it.

Well, it was nearly nothing — it was kind like powder sugar on a cake. There was just the slightest scattering of compost over the top of the soil. Left to my own devices, I would have applied three or four bags. That must be some strong stuff. But it has no smell at all. Callie paid it no notice. 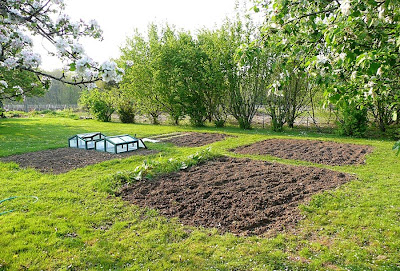 Four, four, four garden plots tilled — ha ha ha ha ha!
It's getting harder and harder to resist planting things in the garden, with this warm, sunny weather. I think I might get started today or tomorrow. We'll hold back on the plants that are sensitive to cold — tomatoes, eggplant, peppers — but get going on a few others. We are going to plant sweet corn this year for the first time. Wonder what our neighbors will think of corn on the cob roasted on the barbecue grill?
Posted by Ken Broadhurst at 06:54