“Some combinations become famous just because the mixture was such a happy one that it has lived on and on, pleasing successive generations of palates,” wrote Julia Child in The Way to Cook. “Salade Niçoise is certainly one of these...” Julia says her recipe is based on Escoffier’s — “he was a Niçois, after all” — using cooked potatoes, green beans, and eggs along with lettuce, tomatoes, olives, and tuna.

(November 2018 — There is some controversy about this recipe for the Salade Niçoise nowadays. People who claim to know the traditional recipe for the salad say it should contain no cooked vegetables — and no lettuce or vinegar! — and that either tuna or anchovies can be included, but not both! The recipe with cooked green beans and potatoes is what I've always known as Salade Niçoise, mostly in Paris where I lived for 6 or 7 years in the 1970s and early '80s. I've never spent much time in Nice.)

Salade Niçoise — which supposedly originated in the city of Nice, down on the French Mediterranean coast — is one of our favorite summertime foods. It's so easy to make, and after you've cooked potatoes, green beans, and eggs, you can have all the ingredients on hand in your refrigerator, where they will keep for a few days. 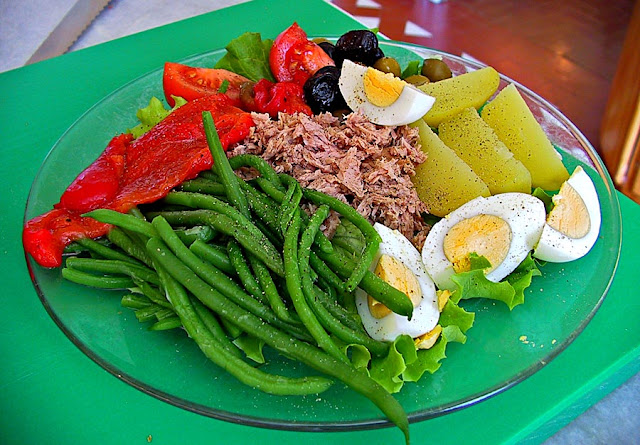 I remember a trip we took to Provence in June 1993. It was the first time we rented a house — a gîte rural — and the first time I had been back to Provence since the 1970s. We ate lunch out nearly every day, because we were going to see all the sights in the area. The way I remember it, we always ordered Salade Niçoise, because I wanted to see how different restaurants and cafés served it. Walt, of course, remembers eating pizza nearly every day! I think we had a lot of both. 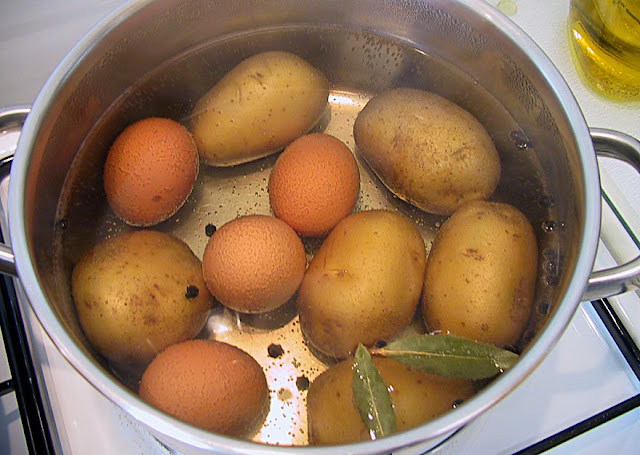 Boil some potatoes and eggs.
I like to put salt, black peppercorns, and bayleaves in the pot.

Some of the restaurants in Provence made their Salade Niçoise with rice instead of potatoes. Most used canned tuna, and the fancier places served you a freshly seared tuna steak. All included tomatoes, green beans, eggs, and olives. But that's Provence, not Nice.

For a lot of people, a Salade Niçoise wouldn't be complete without a few anchovy fillets on the plate. For me, the indispensable ingredient is freshly made vinaigrette. That's what brings the salad together. 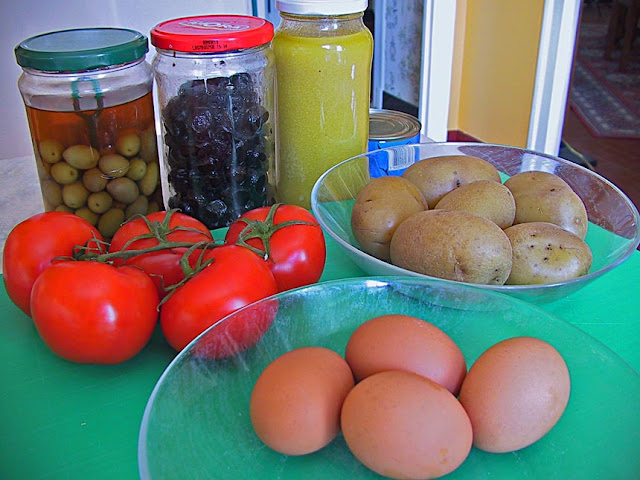 Some of the ingredients for Salade Niçoise,
including olives and vinaigrette

Here is Monique Maine's recipe (Cuisine pour toute l'année, 1969). She might not be a Niçoise like Escoffier, but I always like her recipes, at least as a starting point:

Soak the anchovies in cold water for an hour to de-salt them. Dry them with a paper towel and remove the bones.

Cut the tomatoes into quarters. Dice the green beans, celery, and bell pepper. Slice the eggs, potatoes, and onion into rounds. Cut the lettuce into strips.

Combine all the ingredients, including the olives and tuna, in a salad bowl, adding salt and pepper as you go. Lay the anchovy fillets over the top. Season with 5 Tbsp. of vinaigrette made with olive oil.

What we usually do is get all the ingredients ready and bring them to the table in their own bowls. (I don't do onion or celery.) Then you can make your own salad on your plate, using as much of each ingredient as you want, and finally spoon vinaigrette over all. 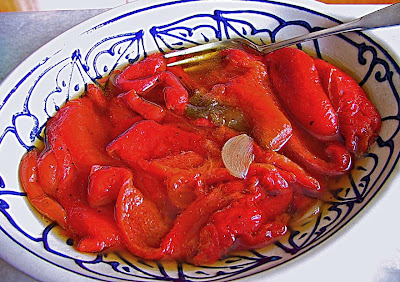 Roasted red peppers, thanks to the 2008 vegetable garden
(and the freezer)

It's not summer yet and this is a classic hot-weather dish. But we had eggs, olives, potatoes, and tuna in the house. We also had some roasted red peppers in the freezer. Walt bought tomatoes at the market in Montrichard. It was a great meal for the last day of our 2009 April mini-summer, and not the last Salade Niçoise we will eat this year.

The temperature this morning makes it feel like early March out there again. And skies are gray.
Posted by Ken Broadhurst at 07:59