There is a big clump of white daisies growing out in the garden, right next to the table and chairs we have out there. Yesterday I sat out there, under an umbrella so I wouldn't get sunburned, and listened to the radio for a couple of hours. 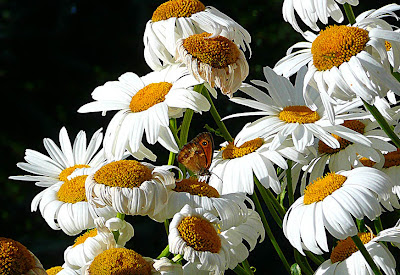 While I listened, I watched several butterflies and a lot of bees feeding in and on the daisies. And I took pictures. Here are some of the ones that came out the best. I took literally 200 pictures in two hours. As usual, you can click the pictures in this post with your mouse to see larger versions. 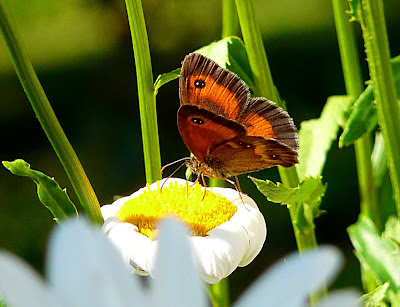 I especially tried to get good photos of the two or three orange-colored butterflies that I saw. One is just above. But they were the hardest to photograph, because they wouldn't sit still. And when they did, they seemed to sense my presence and turn themselves so that I couldn't see them very well. 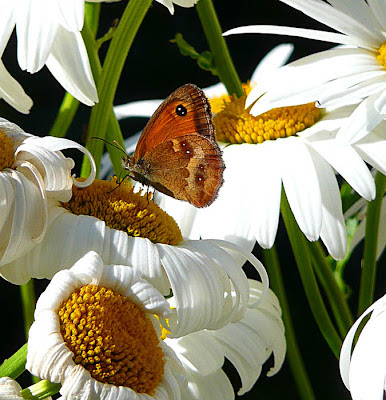 They would turn themselves around so that they were either facing me or looking in exactly the opposite direction. They'd keep their wings folded up. All I could see most of the time was a vertical line with six little stick-legs holding it up. But I finally did get a few good pictures. 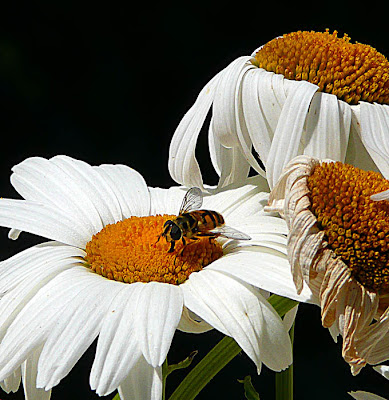 As I said, there were also a lot of bees out there but I didn't try to take pictures of them specifically. I did get a few though. It's nice to see bees, with all the talk about how their populations are declining. 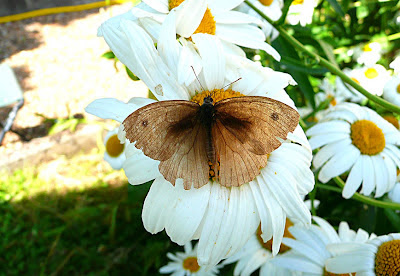 There was also one brown butterfly. It looked like it could be the same kind as the more colorful one, but it didn't act so shy and uncooperative. Could it be the female of the species? I think I remember that some butterflies have males and females that are differentiated this way.
Posted by Ken Broadhurst at 19:09