We spent the afternoon out in the country with friends who have a house about 10 miles south of Saint-Aignan. The land down there is given over to real agriculture, with rotating crops of barley, sunflowers, rapeseed (aka colza or Canola), and hay. Not grapes. 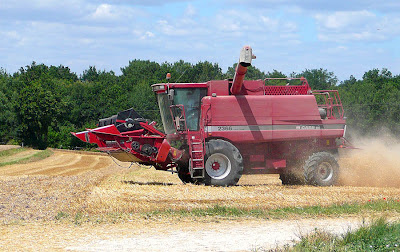 The grain harvest is under way at full tilt all over northern France right now. The weather has been relatively warm and dry since May 1 — especially compared to the weather a year ago. This is the driest July here since we put in our first vegetable garden in 2004 and started keeping track of rainfall. 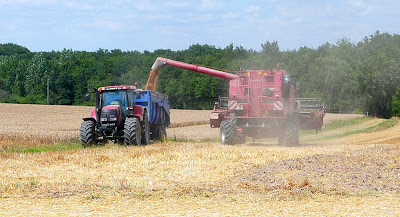 I think the grain you see being harvested in these two pictures is barley, but I'm not sure. It could be wheat. I know a lot of wheat is grown in the region called La Beauce, which is the flat country with wide fields of grain just north of us. We drive through there on the way to Chartres and Paris.

The grape harvest won't start until September unless the weather turns really hot and speeds things along.
Posted by Ken Broadhurst at 06:35