Yesterday two women from California, friends of good friends of ours back there, came by Saint-Aignan to see us. They said they wanted to meet some people who had actually done what they, and other people they know, dream of doing — picking up and moving their lives to France. 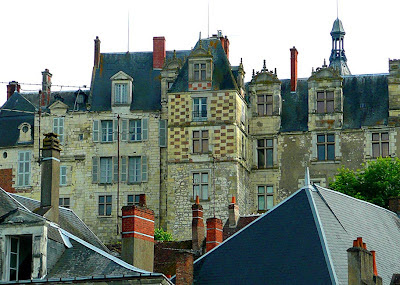 The back side of the château at Saint-Aignan
N. lives in a big town just north and west of Los Angeles in Southern California. C. lives in San Francisco, on Telegraph Hill. It's hard to imagine two more different environments — except if I think of Saint-Aignan and how different our lives are now from what they used to be in California.

C. and N. have been spending about two weeks in a gîte rural located in a town about a two-hour drive west of Saint-Aignan. They said it is owned by a couple of Americans from South Carolina who bought it eight years ago with the idea of opening a B&B and a gîte, or vacation rental unit. 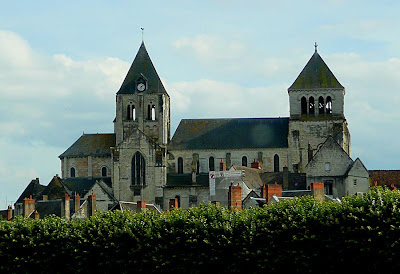 The enormous Saint-Aignan church, seen from the bridge
The French word gîte means "a shelter, a place to sleep." Since the mid-1960s, there has been a movement in the French countryside to turn unoccupied houses into short-term rentals for vacationers. They are called gîtes ruraux because they are usually old farm properties in a rural setting. The original clientele was French people or other Europeans. Now a lot of Americans rent gîtes in France. 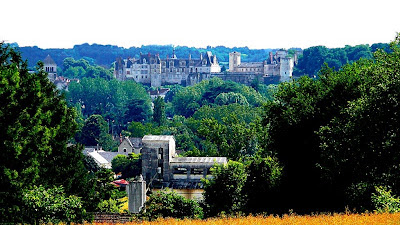 A longer view of the château de Saint-Aignan
The gîte movement has always been a kind of back-to-nature thing, giving people who live in crowded cities a chance to taste the country life their parents or grand-parents lived. Finding your roots, in other words. Some gîtes are very comfortable, even posh, but mostly they are sparsely furnished places with decent kitchens so that you can cook your own meals. Europeans often pack their own sheets, towels, TV, and other belongings into the car and drive out into the country to spend a week or a month. In a way, it's a form of camping, but slightly more comfortable. The little Saint-Lazare chapel across the river
in Noyers-sur-Cher was built in the 12th century
Anyway, when C. and N. arrived at Saint-Aignan yesterday afternoon, I drove down into town to meet them. We climbed up the steep, high steps to the courtyard of the château so that they could see it and enjoy the view of the town and river from up there.

Then we walked down the hill on the other side into the old town. We were passing by a café when I saw two friends of ours, J-L and S., sitting and having a mid-afternoon coffee. We stopped and talked for a minute, and I asked J-L and S. if they'd be willing to show us the house they are in the process of restoring. They said okay. The house is just around the corner, right on the little square where the Saint-Aignan farmers' market is set up every Saturday morning. They are restoring it to sell it. 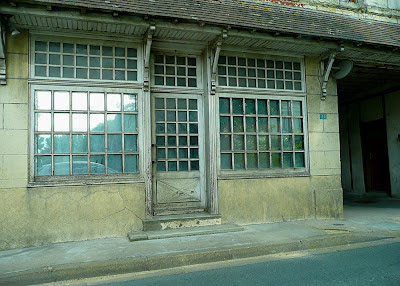 An old storefront in Saint-Aignan, no longer open for business
It's an old townhouse and was a boulangerie until very recently. There are three floors. On the ground level, J-L and S. are having a modern kitchen put in, and there is a second room which could be a living or dining room. On the second level are two bedrooms, one of them pretty large, with what is going to be a nice bathroom. On the third level there is a big open space which could easily be two bedrooms or a big family room, and they are putting in a spacious bathroom with nice fixtures. We were able to sit out in our back yard and lift a glass of
wine before our visitors drove back to their gîte.
There are great views of the Saint-Aignan church from most of the windows of the house, and as I said it is located on the square where the weekly outdoor market is held. But there are also two very narrow, very steep staircases in the house that go from one level to the next. They are the kind of staircases that are nearly ladders, and only one person at a time can get by. And on the third level there is a big old wooden beam across the room that a person as tall as I am has to duck to pass under. You could foresee bumping your head on it quite often if you lived there.

Besides, the restoration/renovation work is still very much under way. In other words, not much is finished and there is dust everywhere. Walls wait for paint. Tile floors still need cleaning and finishing. It's pretty much a mess, but will be very nice, for the right people, when it is done. If you're looking for a place in a small French town with character and convenience, let me know. 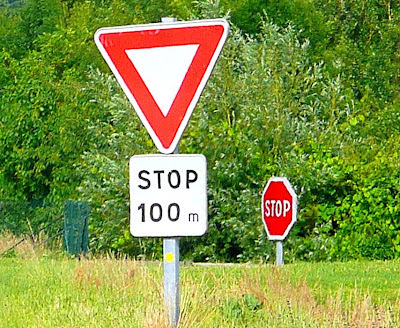 We were glad C. and N. found time to stop by...
Anyway, after we saw that house, we drove back to our much more modern place at La Renaudière. I thought C. and N. might be disappointed to see that our house is not particularly historic. It's built of concrete block and stucco, not old stone. But I could sense that they were actually relieved. They both commented that ours is the kind of house they could actually envision living in. We sat out in the back yard to talk and have a glass of wine before they headed off into the sunset.

I think the gîte C. and N. are staying in is pretty rustic. In fact, N. said it was an old stone barn before it was converted. She said she was convinced she could still smell centuries of cow pee in the old tile floors when the weather turned damp...
Posted by Ken Broadhurst at 08:35