It's funny how some places just keep coming back in visits and pictures. Last March, I decided to do some reading about the town of Vendôme and do a few blog entries about it. There are here: Porte St-Georges and Views of Vendôme. 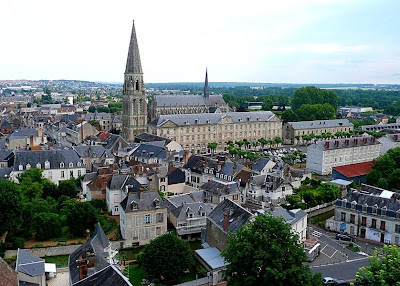 A view of Vendôme from up on "the mountain"
Vendôme is a small city located north of Blois and therefore a good hour's drive north of Saint-Aignan. At Vendôme there is a TGV station. The high-speed train puts the town just 45 minutes south of Paris. 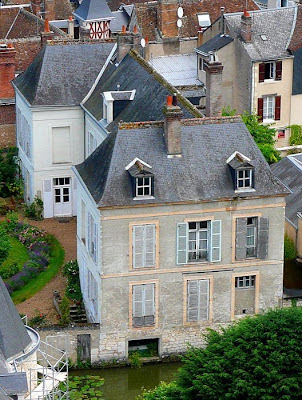 I enjoyed taking pictures of some of the houses
that we could see down in Vendôme
On June 22, a Sunday, CHM and I were driving to Paris. I decided to drive north from Saint-Aignan up to Chartres and then sort of east toward Paris. That route would take us close to Vendôme, and CHM asked if we might stop and look around there. 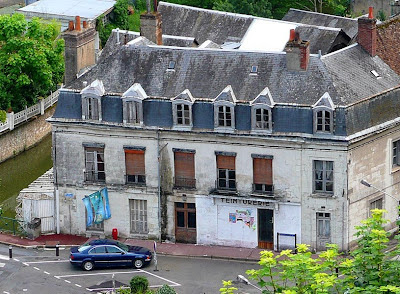 We were there at 11:00 a.m. We thought we'd go on farther before stopping for lunch, but the weather was nice and we looked around in Vendôme longer than we had planned. We went up to "the mountain," as the locals call it, to see the ruins of the massive château that used to be up there and to see the views of the city from that high up. 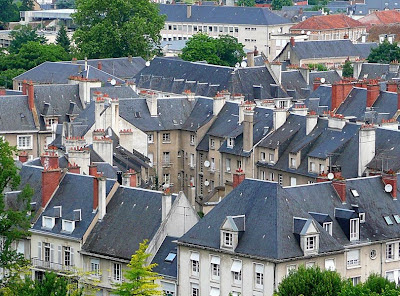 Then we drove down and parked in front of the church, which is the Abbaye de la Trinité. We walked through the old cloister and then went into the church. We took a lot of pictures, of course. 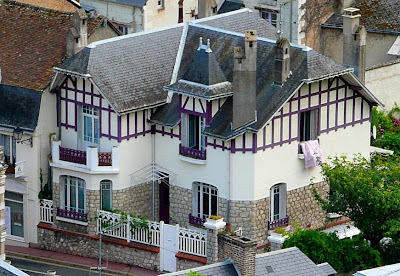 And then it was time for lunch. We had trouble finding a restaurant in the town center. A lot of restaurants were closed for the day. Some that were open said they served drinks only, and sandwiches, on Sundays. A waitress in one place recommended a pizzera just up the block, around the corner. We found it. 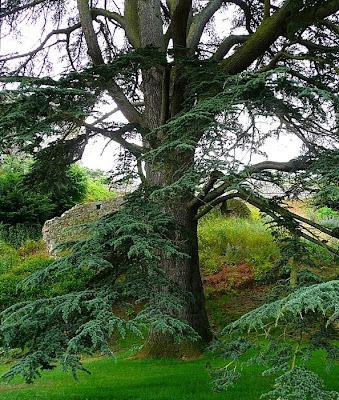 There is a very large Lebanon cedar tree
up on the château grounds in Vendôme. 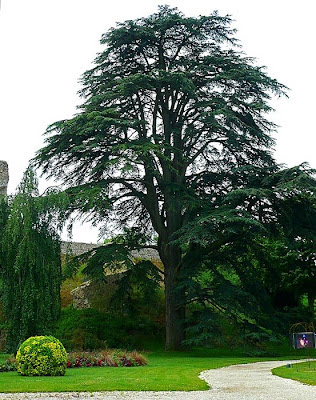 We sat "outside" but it turned out to be a sort of room that was open on the front but completely covered by a roof. It was in a courtyard and I can imagine that in a previous life the space was used as a garage or a storage area. In fact, there was a door at the top of a set of five or six concrete steps in the back right corner, near where we sat. As we were eating, a group of four young people came into the restaurant area, went up those steps, unlocked the door and went into a stairway. So it is the door through which they access their apartment building, I guess. 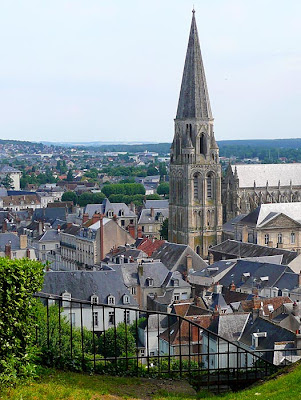 Trinity Abbey in Vendôme
For lunch I had a salade vendômoise, which was salad greens and tomatoes with duck gizzards, thin slices of cured duck breast (like ham), and some other meats including lardons fumés. CHM had a pizza. It was all very good. 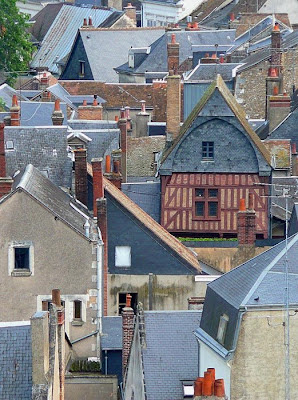 Vendôme
On a sign in the restaurant, we read that if you ordered a bottle of wine and didn't finish it, you were welcome to ask for a stopper and you could take the wine home with you. So we decided to order a bottle of the local rosé wine, a Coteaux vendômois, because that was the only way we could taste that specific vintage. The wines the restaurant served in carafes were from places Chinon and Oisly, which we know well. Vendôme rosés are made with Pineau d'Aunis grapes. 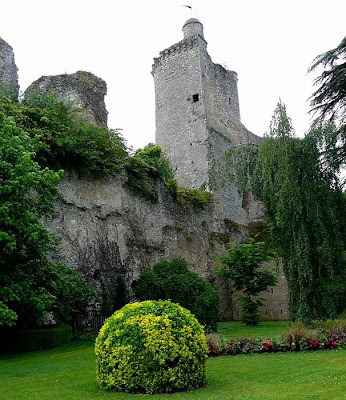 The ruins of the old château at Vendôme
At the end of the meal, we had more than half a bottle of rosé left. The waitress brought us a stopper and we took it to the car and then on to Paris with us. That was the first time I'd ever seen carry-out wine in a French restaurant.
Posted by Ken Broadhurst at 07:08