An afternoon walk in summertime

Yesterday afternoon it was my turn to walk Callie. It was a breezy summer afternoon, warmer than I expected. I put on a long-sleeved shirt over my tee-shirt but I was too hot almost immediately as we started down the hill on the north side of the house. 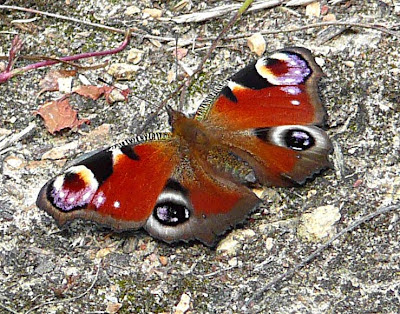 This butterfly seemed to wait for me to take its picture.
We walked along between vineyard plots, with the rows running away from us on either side of the so-called road. As we got down to the edge of the woods, I noticed the butterfly. It kept landing on the ground just a few feet ahead of me. I changed my camera to 7-megapixel mode and used the zoom lens to get a good picture. It waited patiently, ignoring the dog. Then it flew away. 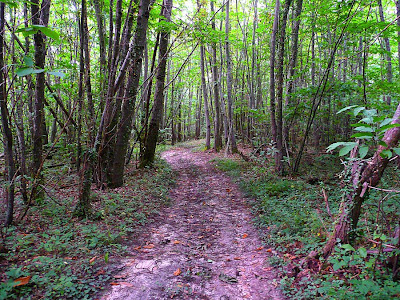 Off the left of the road, a barking deer...
As we (the dog and I) entered the woods on a fairly steep tractor path headed downhill, I heard a strange barking on my left. It was a high-pitched cough, not really similar to a dog's bark, but a bark nonetheless. I know friends of mine will laugh when they read this: I think it was a roe deer — a chevreuil in French. They are said to bark, and I believe I heard one barking this time. It's not the first time. 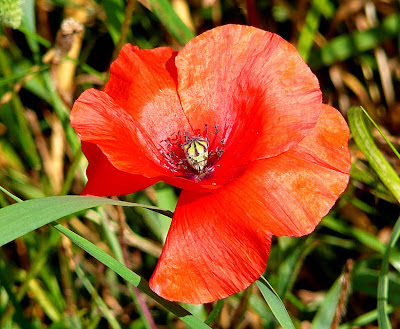 Poppies, known as coquelicots [kuck-lee-coe] in French
Callie went running off into the woods, chasing whatever it was that had barked. I continued down the path, calling her. In a minute, she showed up, panting, with her tongue hanging way out of her mouth. As I said, it was hot. Then I saw the poppies, one of which is pictured above. 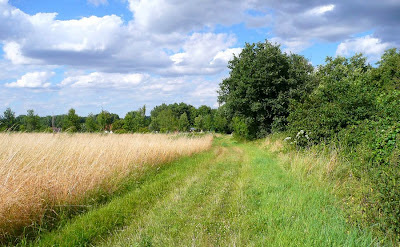 The grass "road"along the edge of fallow fields, leading down
to where new houses are being built
We emerged from the woods at the bottom of the hill and followed the grass "road" past some houses. One has a pool. The house is only a year or two old. There was a woman in bathing suit. She glanced at me and Callie and then quickly disappeared indoors. I noticed her car license indicated she was from the Paris area. 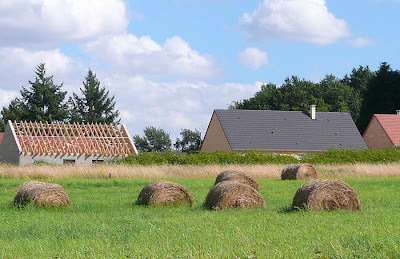 New houses near our hamlet
Since we arrived here in 2003, about a dozen new houses have been built within half a mile or so of ours. None is within sight of our place, but when people actually move in the local population will increase significantly. It will be interesting to see how different our neighborhood becomes.
Posted by Ken Broadhurst at 07:23