The Festival of the Snails 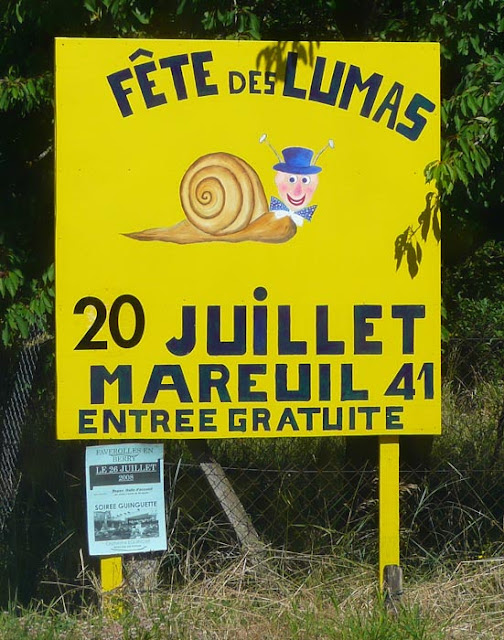 We didn't take a picture of this sign on Sunday,
but on Tuesday I had to go down to the village
and the sign was still out on the side of the road.

In our village near Saint-Aignan, the annual summer festival is called La Fête des Lumas. I was mystified when I first heard about it five years ago — that's when we moved to the Loire Valley. Then I found out that the word luma in regional French means "snail." (Here's a link to a Wikipedia article about snails in French. And also a link to Walt's blog topic on the subject of our local snail festival.)

Luma as a word for "snail" made some sense to me, despite the fact that in standard French the word would be escargot, as we all know. The French word for "slug" — which is a snail without a shell, as we all also know — is limace, pronounced [lee-MAHSS]. From luma to limace is but a short phonetic voyage. Even a snail wouldn't need much time to complete that linguistic trip. 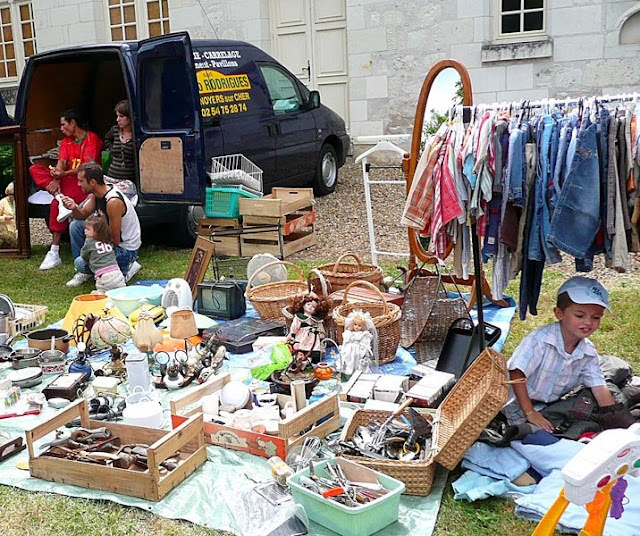 The part of the snail festival we went to see was the flea market.
It wasn't really "exotic" and we didn't buy anything.

Luma is another name for the snail called the petit-gris. That's different from the escargot de Bourgogne, which is called the gros-blanc. The color, gray or white, describes not the snail's shell but the color of its flesh. Here in Saint-Aignan, we see a lot of the "little-grays" outside in the garden, but I don't think I've ever seen a "big-white." We used to see a lot of petits-gris in California too. They were evidently imported from Europe in the 19th century or even earlier.

Somehow, calling snails by a term so closely related to the word for "slug" makes them seem even less appetizing, doesn't it? But people eat clams, oyster, mussels, conchs, and other mollusks, so mollusks that live on land, like snails, are fair game too.

Wonder why it is that people don't eat slugs? I bet some do. Or used to. As Walt said, one of the big acts at the festival was
this French group that performs Beatles' songs.

So when did people start eating snails? I found this web site in French that gives an answer to that question. Reading it, I learned that there are 40,000 species of gastropods (snails and slugs) on Earth and that, according to archeological evidence, people have been eating them since at least the Mesolithic Era —12,000 years ago.

The Ancients, Greek and Roman, enjoyed eating snails too. Pliny writes that Romans liked to have some grilled snails and a glass of wine at snack-time. One enterprising Roman came up with the idea of gathering and feeding snails to fatten them up. The practice spread throughout the Empire.

At the time of the French Renaissance, 500 years ago, people got interested in all things Ancient again — including snails. In fact, snails and frogs are cold-blooded animals, so they fall into the same category as fish. During Lent and on Fridays, in monasteries and convents all around France, members of religious orders ate snails, frog's legs, or fish instead of meat. In the French provinces, so did everybody else, even when the more affluent crowd in Paris turned their nose up at them. 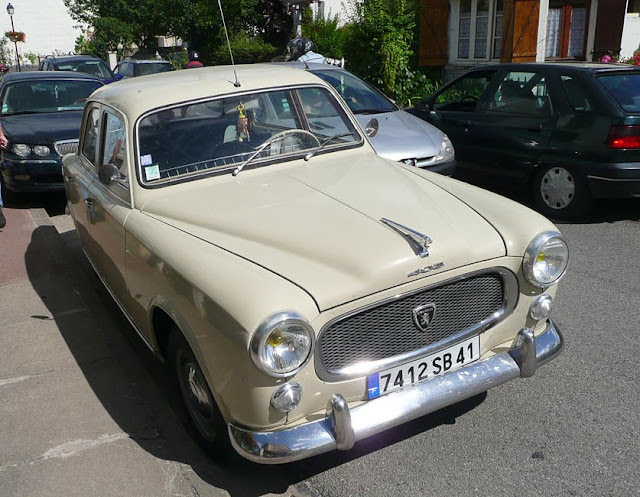 In the early 1800s, the famous chef and gastronome named Carême — he who presided over the kitchens at the Château de Valençay, about 20 minutes from Saint-Aignan — got interested in escargots. He served them to the Czar at a state dinner. They became all the rage in Paris society. Restaurants started serving snails Burgundy-style — that's with butter, garlic, and parsley. That's the way you eat them today in France, most of the time.

In fact, I can't remember the last time I ate snails. I didn't go to the Fête des Lumas to eat, but I know that snails are what was served. Walt had some in a restaurant a year or two ago. Maybe I'll have to do the same the next time we go out to dinner.
Posted by Ken Broadhurst at 06:15