That title is a line from an old Francis Cabrel song, and it means "as heavy as a bottle of butane" — which is really heavy. Butane gas is what we are using to fuel the gas burners on our new stove (see yesterday's post).

In the song Cabrel talks about getting up in the morning and having his paupières en panne... his eyelids won't work right and they feel as heavy as a bottle of butane. The song is called Sarbacane (1989) and the lyrics are here. 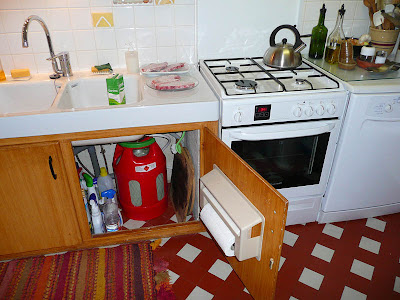 The red thing under the sink is the tank of butane.
I know how heavy a bottle (or tank, in better English) of butane can be. In 1972-73, when I lived in the rainy Normandy city of Rouen, I had a butane space heater in my little apartment. To get a new bottle of butane when one ran out, I had to walk across the old downtown — usually in a fine, cold rain, Rouen being famous as "the chamber pot of Normandy" (Le Pot de chambre de la Normandie) — carrying the empty tank on my shoulder. That wasn't too bad if you liked having wet feet.

But then when I got to the store called a droguerie (don't ask me why), where things like household supplies and cleaning products are sold, I traded in the empty and got a new full tank. Then I had to trudge back across the city, a 30-minute walk, if I remember, with the full, heavy bouteille de butane on my shoulder. I was, what, 24 years old, and I didn't have a car or know anybody who did.

Nowadays, of course, I do have a car, so getting a tank of butane at SuperU or Intermarché or even the little grocery store in our village is easy. We bought two of them, so when the first one is empty we will be able to connect the second one and then go get a refill.

I know you can get propane or butane in the U.S. People use it to fire their gas grills. That's what we did in San Francisco. There we would take in your tank and it would be refilled. Here, you just trade in the empty and get a new one. When you decide turn in your empty for good, you get your ten-euro deposit back. 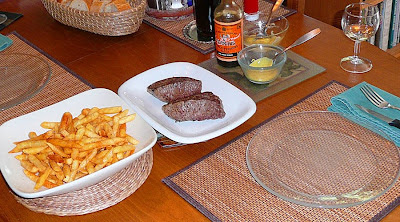 Steak and French fries, the classic steak-frites,
for lunch yesterday. The steaks, called pavés de rumsteak,
cooked nicely in a heavy metal pan on a hot hot gas burner.
Estimates we've seen say a tank of the size we have should give us between 60 and 100 hours of cooking time. That should last two or three months, I think. We have an electric oven and one electric burner on the stovetop, so we won't use as much gas as we would if it were an all-gas range.

Our neighborhood doesn't have piped-in gas (called gaz de ville here). We have no choice but to use butane or propane if we want a gas cookstove, and an outdoor propane tank would not be practical. Walt says we have really "gone native" (a British expression, I think) with our little butane tanks. Tant mieux.
Posted by Ken Broadhurst at 09:13