New "fireworks" for the Fourth

As part of our kitchen upgrade project, we've decided to trade in the stove we bought five years ago when we arrived here in Saint-Aignan. It's an all-electric model with a ceramic cooktop (called vitro-céramique in French). The brand name is Scholtès, which I think is a French company (although they are nearly all multinational or European these days).

We thought the ceramic cooktop would be easy to clean and therefore good-looking as well as otherwise fine for our cooking needs. And it has been for five years. From the very beginning, however, we realized that the burners under the glass top were not quite as hot as we would have liked. The burner we use most is rated at 1700 watts. 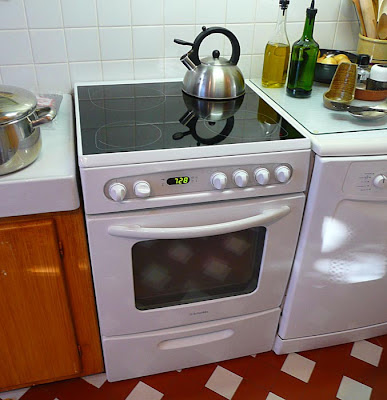 The Scholtès cookstove that we are trading in
for a mixed gas-electric Brandt stove
The Scholtès has one burner that is a halogen ring rated at 2400W. But the ring is so big that not very many pots and pans will work with it — they are too small. The ring has an 850W burner inside it, but you can't use both at the same time. If you could, it would be nice to have the equivalent of a 3250W heat source.

As it is, we have one big stock pot that, when filled with water, takes hours (it seems) to come to a boil on the ceramic stovetop. Some of our nice frying pans are not perfectly flat on the bottom, and they heat very unevenly on the flat glass surface. Food burns in one part of the pan and is undercooked in the other. 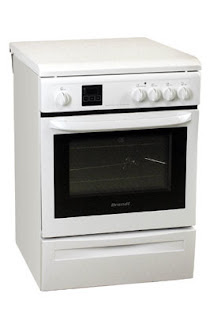 And the oven has turned into a problem too over the past couple of years. First, the door didn't close correctly and the light inside the oven stayed on all the time. We had a five-year service plan on the stove, so we called and got a repairman to come tighten up the hinges. That worked for a few months before the oven light began staying on all the time again. A second repairman came out a few months ago and replaced the old door hinges with new ones. Now it works, but you still have to keep an eye on it.

We paid a thousand euros for the Scholtès stove in 2003. For that price, it's been a disappointment. By trading it in, we get a good discount on the new stove, which will end up costing us about 500 euros. Considering the amount of cooking we do over the course of a year, we think it will be a good investment. It would be easy to spend 500 euros in restaurants over the course of a month, and we don't do that.

So yesterday we went to the store and bought a new stove (in French, une cuisinière). It's a cuisinière mixte made by Brandt, and mixte or "mixed" means it has three gas burners and one electric one on top of an electric oven. It will be delivered next Thursday.

One of the gas burners on the cooktop is rated at 3500W, which will be a lot hotter than anything we have now. There are two other gas burners, and then an electric burner rated 2000W. The oven is also electric, with electronic controls. We are hoping for the best with that.

We realized yesterday, at the proverbial last minute, that oven width was a big issue. We had picked out and were ready to go buy a "mixed" stove made by Electrolux, a Swedish company that has bought out two French appliance manufacturers called Arthur Martin and Faure. The oven on that stove was 41 cm wide. But it also had a 4000W gas burner that we really wanted. 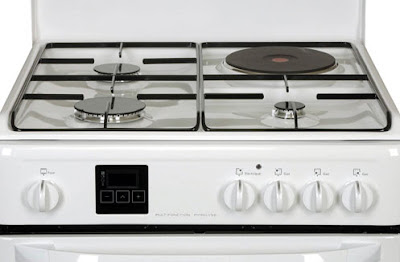 This is the "mixed" cooktop, with three gas burners
and one electric burner, plus an electric oven.
Walt started measuring some of our favorite cooking dishes, and at least four of them are 42 cm wide. That meant we wouldn't be able to use them in the new oven. So we quickly shifted gears and found a Brandt stove with an oven width of 43 cm, which is the same width as our current oven. That's 17 inches. (I bet your American oven is a lot wider.)

So we are getting a slightly wider oven, but a slightly less powerful main burner. We will also have to run the stove on bottled gas — butane in our case. We can buy bottles of butane gas at the supermarket for 15 euros each.

A bottle of butane is supposed to give you about 60 hours of cooking time. We'll keep a spare down in the garage, at the ready. With an electric burner and an electric oven, we shouldn't go through them too fast, we hope. Our frying pans will work better, big pots of soup or water will heat up faster, and our cooking will surely improve. Everybody knows that gas is better than electricity for cooking.

The standard French kitchen appliances are 60 cm or 23½" wide overall. So they are pretty small compared to North American appliances. Kitchens are often much smaller too. But some really good food comes out of small spaces.
Posted by Ken Broadhurst at 06:50