The new stove was delivered this afternoon. No dents in the sides this time. Thank you, Darty. 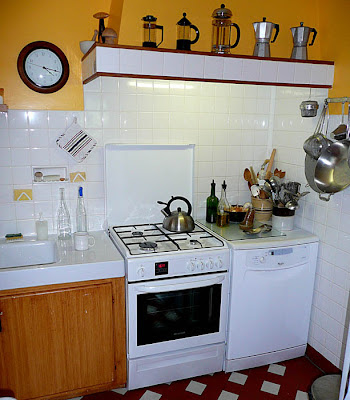 The Brandt KMP 715 W cooker, with both gas and
electric burners and a multi-function electric oven
The head delivery guy — the one who was obviously in charge — did a good-enough job. When I told him that the electrical cord on the old stove was the one that should be attached to the new stove, he stopped what he was doing. Yes, he said yes, that was a better cord, and he used it instead of the patched-together cord he was fabricating and had planned to use. The only reason I knew to tell him which cord to use was that the installation guy last week had told me he was going to use the cord we already had. 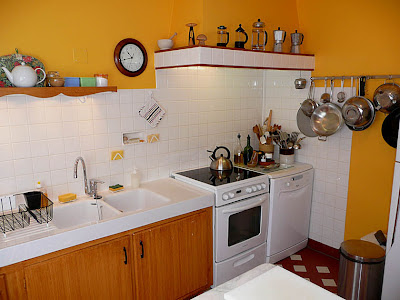 Did the "old" ceramic-cooktop stove look more modern?
Bottled gas? Maybe modern isn't all it's cracked up to be.
That first installation specialist was obviously a pro. He knew his job. Today's delivery guy, when he was stumped, had a moment of insecurity and told me: "I'm a student and just doing this job for the summer." Then he had a second thought and added: "But I plan to make a career of delivering and installing kitchen appliances, of course." Ha ha ha.

Anyway, he and his assistant got the old stove out and the new one hooked up. But it took Walt to figure out how the bottle of butane needed to be activated. The installer was trying to figure it out. It turned out there was a button on the gas bottle that needed to be pushed several times to get the gas flowing. When it finally worked, no problem. Whoosh! Let there be fire. 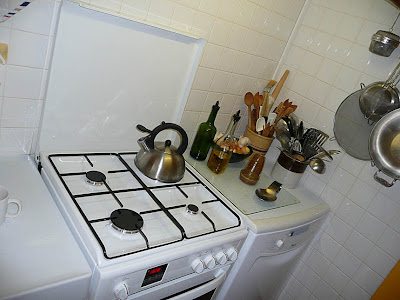 The tea kettle is hiding the electric burner...
The new stove has electronic oven controls, including a time-delayed cooking and stopping, and a timer. The documentation I had read before we bought the stove seemed to say it had no oven timer. We figured we could live without one — there's on on the microwave, after all — but I for one didn't believe a 21st-century cookstove with electronic oven controls would come without a timer. And for once I was right.

Today's lunch: steak-frites. We have to cook a steak on the new, hot gas burner. We'll use our electric deep-fryer, as usual, for the French fries. Report at 11:00.

Then we plan stir-fried dishes and others requiring hot, hot burners for the next few days. Stir-fry of eggplant and chicken, for example. Or pork and cauliflower. And so on. I went to the supermarket today and found prices for fresh produce to be very low. 'Tis the season.
Posted by Ken Broadhurst at 06:29