One day follows another 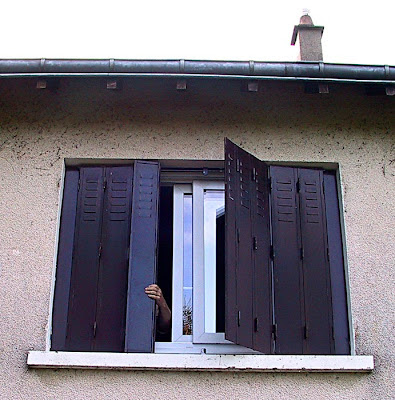 Day begins at La Renaudière when we open the shutters on the bedroom window and roll up the one on the kitchen window. Opening the bedroom shutter causes considerable screeching and clanging of metal against metal. It wakes you up if you are still half-asleep when you open it. 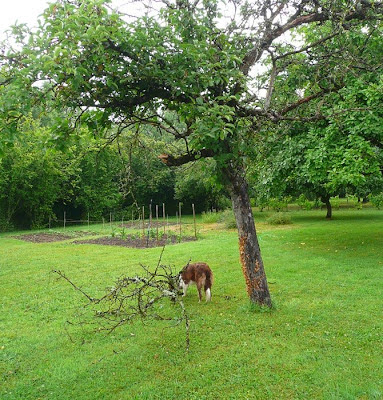 One morning last week, after a 5:00 a.m. thunderstorm, we found a big limb on the ground. It had broken and fallen out of an old apple tree that is about half dead. We plan to cut that tree down entirely and stack the wood under our carport/woodshed to dry it for burning later. 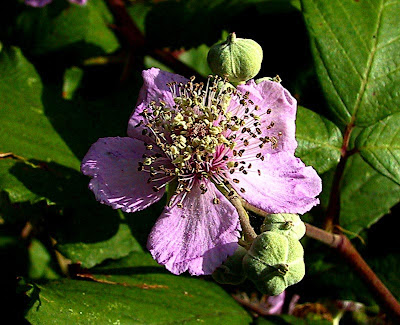 Yesterday I spent a couple of hours cutting down blackberry brambles that were threatening to invade our yard and maybe pull down the fence on the northwest corner of our land. I had started cutting the thorny vines a week or so earlier. I did a much better job yesterday, but it isn't finished. I guess yard work never is. 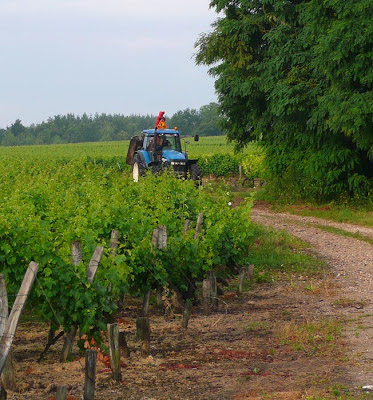 We each walk Callie out in the vineyard once a day. There's nobody out there these days. Once in a while a tractor comes in and runs up and down the rows of vines, clipping off the branches that are growing too high. But the hand-pruning and other maintenance work done by small crews of actual human beings seems to be finished for the summer. 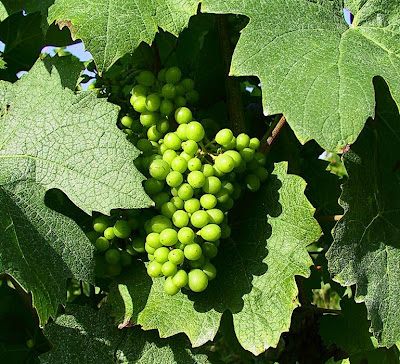 The grapes are coming along nicely, it seems to me. There are also a lot of yellow, pink, and blue flowers of different kinds growing all around. Most of the flowers are tiny, but in some places there are enough of them so that there are good swaths of color. 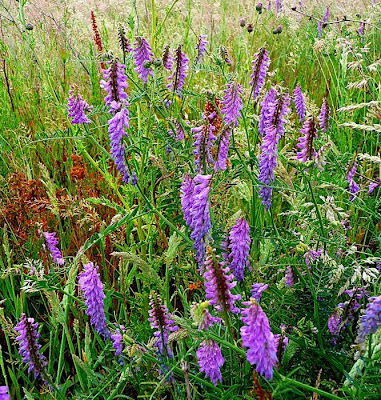 It's nice to be back in a routine, after all the activity in May and June. There's still the kitchen to finish. The cabinet doors wait patiently in the garage for that final coat of white paint. The new gas stove is scheduled for delivery Thursday. There are three new light fixtures that need to be put up. 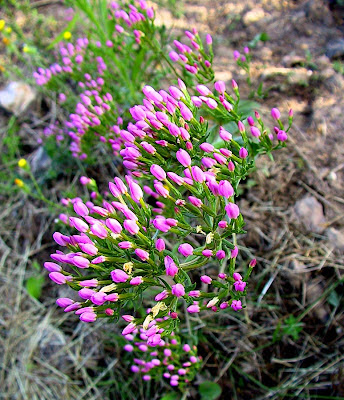 There's a lot more yard work to do too. That never ends, as I said. The weather is clear but cool right now. Walt just came back from his walk with the dog and said "it's cold out there." It's supposed to get warmer as the week progresses. 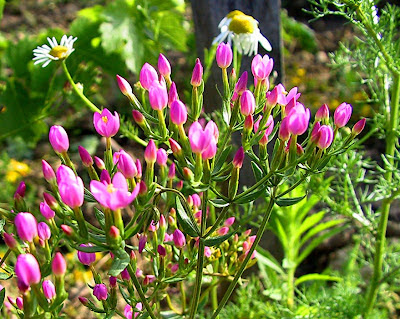 We cut seven small artichokes off our plants yesterday afternoon and we'll eat those today or tomorrow. On the menu today is a Mexican dish called gorditas — crispy flat corn tortillas — stuffed with spicy shredded beef. And for tomorrow an eggplant stuffed with meat, onions, tomatoes, and rice. On Wednesday, we will start moving the old stove out and preparing for the arrival of the new one.
Posted by Ken Broadhurst at 21:36