Seafood at the market in Montrichard

June 20, 2008, at the outdoor food market in Montrichard, just 10 miles south of Amboise and 10 miles west of Saint-Aignan, in the Loire Valley. A beautiful day when all the colors of the food products — vegetables, cheeses, fruits, and fish — were just beautiful. 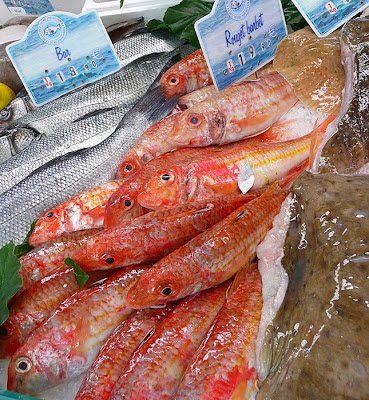 Le rouget-barbet, a little red mullet, for 19.90€/kg
I lingered in front of the display of a poissonnier, a fishmonger. The people selling fish and shellfish didn't mind if I took pictures. There are two varieties of rouget-barbet that live in French coast waters from the English Channel down to the Mediterranean Sea. 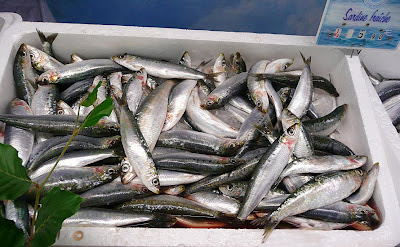 Silvery sardines for 5.90€/kg
There's a good site in French explaining what all the different salt- and freshwater fish are, and showing pictures. Sardines, like rougets, live in the Atlantic from Iceland south to Morocco, and in the Mediterranean. A lot of them are fished in the waters of the Atlantic off western France and northern Spain. 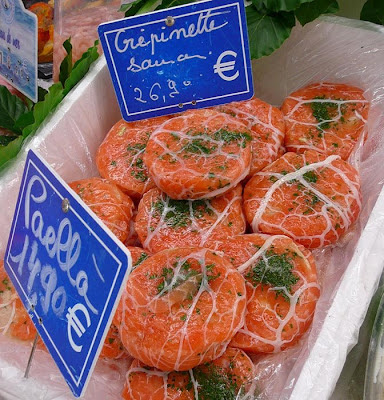 Crépinettes de saumon, chopped-salmon
patties wrapped in caul fat, at 26.90€/kg
With increases in the price of diesel fuel, which powers both fishing boats and refrigerated trucks, fish is getting harder and harder to afford. Prices are sky-high. But French people must eat a lot of it, because the market stalls are abundantly stocked every day. Nowhere in France, actually, are you very far from the ocean. 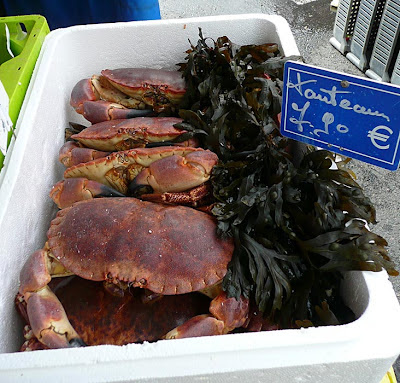 Tourteaux, or stone crabs, at 7.90€ apiece
Not only is the fuel needed to catch and transport the fish and shellfish expensive, but the fish themselves are in shorter and shorter supply. Many fish (salmon, turbot) and shellfish (oysters, shrimp) are farmed nowadays. 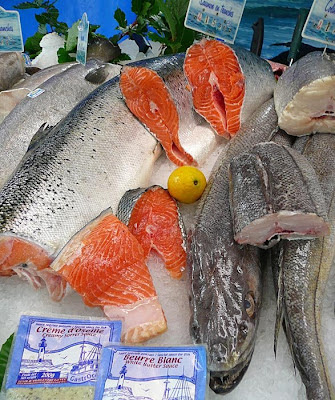 Saumon en tranches, or salmon steaks, at 15.90€/kg
Shrimp are nearly always sold pre-cooked in France. You hardly ever find them raw except in the freezer cabinets at the supermarket. They are nearly always sold with the head on, too. It seems that shrimp are endangered in many places around the world because they are such a popular food. And to think that a century ago, in many places they weren't even considered to be edible. 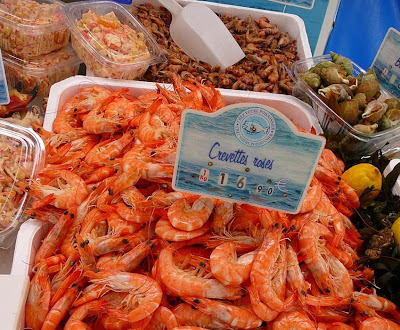 Pink shrimp are 16.90€ a kilogram.
An American friend of ours is not a big fan of fish or seafood. In a restaurant in France, she decided she was going to try shrimp. But when the plate came to the table, she saw the little shrimps' eyes staring back at her. She hadn't counted on that. She couldn't eat them. 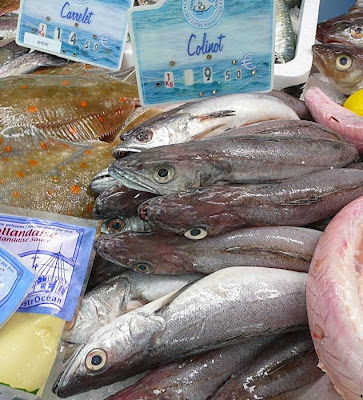 Colinot, or pollock, at 9.50€/kg
Colinot, or colin, is pollock. The name can also be spelled "pollack" and the fish in French is also known as lieu jaune. In England, is is sometimes called coley or coalfish. Fish names are very complicated to figure out. Pollock live in the Atlantic from North Carolina north to the Gulf of St. Lawrence. It's a white fish, but is strong-flavored. There's an Alaskan variety that is milder. It's what you get in fast food restaurants, evidently, and is one of the main ingredients in surimi, which is imitation crabmeat.

In English, we sometimes call a poissonnier a "monger." I just looked up that word and it comes from the Greek. It's been used in English at least since the 12th century.
Posted by Ken Broadhurst at 07:21